How to format partitions

I have a windows laptop and just added additional 1TB ssd. Want to set aside 300GB for linux and looking for recommendations on how to split/partition so I can reformat and install a new linux at any point without braking whole disk boot config:)

Hope my question makes sense. It is been a while when I used linux as a clean install apart from having it on VM. I am not new and do understand that it requires boot,swap partitions… and was just wondering if someone can direct me to a good article or website on how to do it. Thanks

First of all, before doing anything, please take a backup of everything that is important to you!

Secondly, your splitting and formatting depends on your goals. Could you elaborate on them?

Thirdly, you can have a first look at gParted, which you will probably have to befriend, to get on the road to formatting the storage media, as needed.

GParted is an incredibly popular and free partition editor available for Linux distros. Let's see how to install and use GParted.

Hi, thanks. I am familiar with gparted. My goal is simple: win/linux dual boot. To be able to install different linux distro if I do not like the one I installed. If that makes sense. I will set aside 300GB from 1TB. So remaining 700GB on ssd2 will be just for Data

I am familiar with gparted. My goal is simple: win/linux dual boot

An easy way to dual boot would be to install grub and linux on the SSD, and leave windows and its bootloader on the HD. Then you could choose which disk to boot from using the boot order in the bios.

In either case it is a good idea to have windows on a disc on its own, because when you upgrade windows, it will put its own bootloader back on what it thinks is ITS disk, thereby destroying any other bootloader you may have there.

Best to use gpt partition table on the new ssd. And dont forget the EFI System partition needs to be there as the first partition if you use uefi boot.

And backup… as Akito says above
Neville

A system image of Windows is important, if you screw up something. I agree with @nevj keep Windows and Linux on separate drives, install grub on the SSD and use the grub menu to boot Windows. You can burn a gparted CD and boot your PC and use it to initialize your SSD to either GPT or MBR, probably in your case GPT.
You really do not need the whole 1tb SSD to run Linux, I usually use about 130GB for swap, /, /home, one advantage of using a /home, is that if you install some other Linux over the one you have, you only have to format the / partition, and no files are lost in the /home.

Windows is on a separate ssd1, ssd2 is where I look to install linux. So I understand I would need 4 partitions for linux: swap,/,home,boot? If anything happens to hhd2 I would still be able to restore and boot to Windows? That is what I always did before install grub, just nit on a separate HHD.

@Marka01
Yes that is enough. Keep /home small and put all your own files on your data partition.

You might consider a second / and /home, for another Linux distro 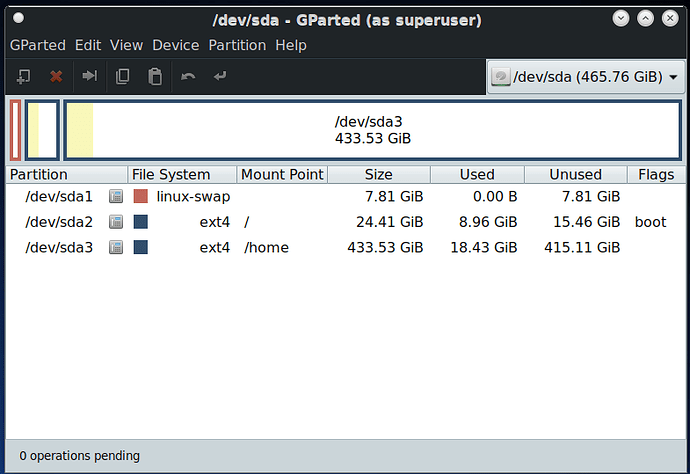 My PCLinuxOS Partitions785×540 44.6 KB
This a MBR partition setup, if it were GPT you would need a EFI partition for boot, you do not need a /boot partition. The EFI would be a Fat32 and the 1st partition, if you plan on more than 1 linux then make it at least 500MB. The /dev/sda1 swap partition is the amount of ram in my PC, post how much ram you have and we can suggest an amount. The /dev/sda2 is / or root partition with the boot flag added, a GPT disk would or should have the boot flag on the EFI partition.
The / or root partition is where Linux is installed, and a Linux install only takes from 5GB to 10GB
to install, in other words you could run Linux with only a 20GB / root partition, this makes Linux idea to install to a USB stick.
The /home is for your data, music, pictures, videos text files. I most always put the /home as the last partition, that way I can either use the rest of the disk or just a part, and leave the rest unallocated. Now, some users swear by the use of a /home, I on the other hand see it this way.
If you plan on using your Distro version, for any length of time, then do a /home, if you just want to try Linux, then just do a 50GB / partition and install Linux and I am not a big fan of multiple Linux installs. You also know you could try Linux by using VirtualBox installed in Windows without any harm to your PC?
The decision is your’s @nevj and I are only here to help.
1 Like