Got my hands on a MSI 1tb hhd/256 ssd Leopard. I’ve dual booted two Toshiba’s, Macbook, Dell XPS, Inspirion, Latitude, Thinkpad to name a few. This one is a little different due to the two drives. The BIOS looks fairly simple when compared to Dells. Has anyone done one of these? I plan to install a Linux xfce version on it and am wondering (since xfce is so fast) if I should try to install it on the hdd and not the ssd? But, would I even get a GRUB menu by doing that? I think it has to be installed on the ssd for start up reasons in order to get a GRUB menu.

Generally, to the average user I would say
“Linux is so fast already, no need for SSD.”

But after all, it still depends on the use case. Some people use Linux even for gaming or other big programs. If you do that, too, then I would recommend an SSD.

Personally, I have 2 SSDs, one with only Windows 10 and the other with only Debian 10.

From what I’ve read on Forums is when they use a hdd and an ssd it’s a way to offer more storage at a lower cost. The main drive is supposed to be the ssd and extras that you don’t use that often go to the hhd. That makes me question whether installing an OS to the hhd would be a bad move. To me it would seem at start up only the ssd would be in use. I could be way off on it and that is why I am asking. This is the first computer I’ve ever had with this set up. In your case, two ssd’s, things are slightly different.

The main drive is supposed to be the ssd and extras that you don’t use that often go to the hhd.

Well, I think this approach is a couple of years old. At this moment you can get 240GB or even 512GB SSDs pretty cheaply, compared to a couple of years ago.
That said, you have an 256GB SSD. Isn’t that more than enough for Linux and even Windows together? I think I would just put both OSes on the SSD and share the 1TB HDD with both for arbitrary data like videos and photos, etc.

I’m running with it. I have install discs for about everything and have screwed a lot of stuff up in this learning process.

I can always start over.

This weekend I’ll hit it. I’ll report back once the mission is done! :)

May I ask if there’s a specific reason for dual-booting? I generally don’t recommend doing so, but seems like you have some experience with it, so won’t suggest not to. Just curious.

None other than I’m crazy and like numerous options on one device. I once had about 8 different os’s on one computer. I had the disk space so why not? It gets cold up here half the year and I’m not into going out and making snow angels. The funny thing about the one I did 8 on was that amount of time it took for me to discover that Arch based os’s need to be installed last. I thought I discovered something and later found an article on it :(

Yeah, if it’s all for the learning experience, definitely go for it!

I lost patience with trying to dual-boot with Windows (10) when it wouldn’t let the GRUB options show and Windows just refused to play nice on my laptop. No matter what I did, it would ALWAYS boot into Windows. So then I just decided ‘away with you!’ installed Linux on the whole drive and never looked back.

As for your topic, I would suggest installing both OSs on the SSD as Akito mentioned. Might as well get the best performance from both.

After 4 (I believe) you must partition x amount of space by itself to be able to add additional distro’s.

Manjaro is a good OS. Run the xfce version on one computer. I really need to branch out more but had Ubuntu MATE crashing and although KDE is beautiful the speed isn’t what xfce is without doing modifications.

Yeah, I’m in LOVE with Manjaro KDE. After all the distros I’ve used over the years, this is like a breath of fresh air. I wish I had given it a try earlier.

It’s so efficient, sleek and snappy. 400MB of ram at system idle with teamviewer running. That’s in the ballpark of MX Linux (~300 or so MB) which was designed to be lightweight. Manjaro is just pure Linux efficiency and that’s what I love about it.

I’ve run the following distros over the last 3 years and none of these runs as fast as Manjaro. There is literally a measurable difference in how much faster everything runs/loads in Manjaro, including web pages. I’ve found it quite astonishing, TBH.
Ubuntu Gnome 17.10/04
Ubuntu 18.04 w/ default Gnome (didn’t like it from day one, lol)
Mint 18.3 Cinnamon
KDE Neon 5.14/15 (only for a couple months before trying Manjaro) 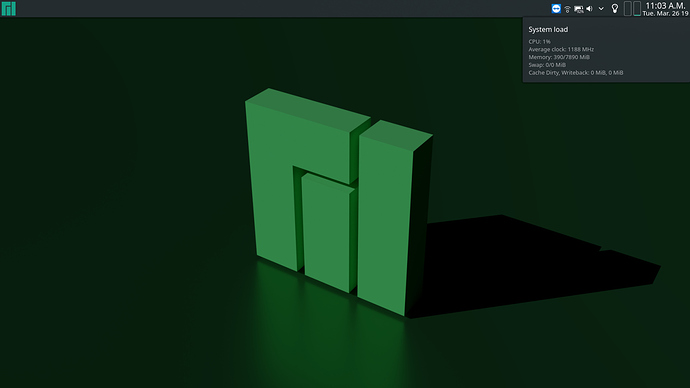 there is always the option of installing the same linux distro on both ssd and hdd to test the speed or performance for yourself. it would probably be helpful to have win installed first so you can see in grub which drive (sdx vs sdy) you are booting to when you get to the grub menu. or use grub customizer to label the two differently.

GParted handles the partitioning in this kind of setup.

If your drive is a GPT drive - which I think has to be the case if you are using UEFI rather than a MBR based BIOS - there is no limit to the number of primary partitions.

there is no limit to the number of primary partitions.

If you use a GUID partition table with default settings, you can have up to 128 primary partitions.
Using 64-bit values, GPT can handle disks of up to 9.4 x 1021bytes or 9.4 zettabytes(ZB).

How many primary partitions can be created on a computer running Windows 8?

Yes, that was a long time ago. Before UEFI. I have no desire to have more than 2 on one machine these days.

When I install a Linux distro on a Windows machine, whatever the disk arrangement, I just specify the main (Windows) harddrive for the Grub installation. It’s part of the install sequence. But on a Linux-only machine, it doesn’t seem to matter and Grub goes where it goes. But I generally only play with Debian-based distros; some of the other flavors work differently, but that’s what flush and repeat are for!