I ran “update –help” (as root, because I’m an idiot) hoping to get a small menu showing me information about the “update” command. Instead, Parrot OS began running… something, that appears to be an update but the estimated completion time is 1d 15h 49min 35,34,33, 32s.
What did I do? Should I stop it by using Ctrl + C or Ctrl + Z?
Will stopping it break anything?

Thank you for your help!

P.S. I’m running Parrot OS as a VM and it’s semi-new. I thought I had done the major updates but I may be wrong.

Could you please share a screenshot of the output of the running command?

In the worst case scenario you can restore from a VM snapshot. It’s easy and quick.

Thank you for the fast replies! Unfortunbately I terminated the original command, (I paused it with Ctrl + Z, then killed it with Ctrl + C), and there didn’t appear to be any noticeable damage. I’m a complete amateur so I don’t know if my actions corrupted files I’m unaware of.
But, because it’s a VM and I only have it up and running to learn in the first place I’m not too concerned with it crashing. So since my last posting I’ve made adjustments to the users and their permissions but I’ve re-ran the same-ish command so I could take photos. (I’m saying same-ish because originally, when I first ran it, there was one root user and I didn’t type sudo as a preface.) 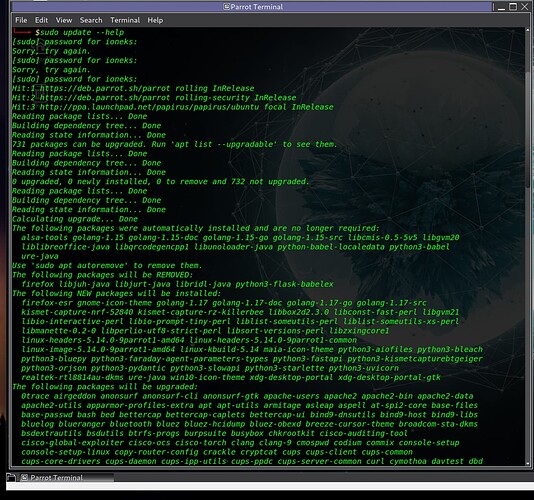 I wasn’t fast enough to get it all on one screen, so there’s one photo showing the command at the very top “sudo update --help” and a second photo showing the remaining time until completion. (Which is much less than it was originally. I think it’s 5-7 hours or something now.)

I’ve had a couple thoughts about the lengthy completion time since posting this question (I think the Parrot OS initializes Anon Surf at startup so all internet traffic uses TOR), but I still don’t understand why Linux is doing what its doing, rather than showing a short help menu.

(I’m being told new users can only upload one new image per post. I’ll attempt to attach the second photo in a separate post.) 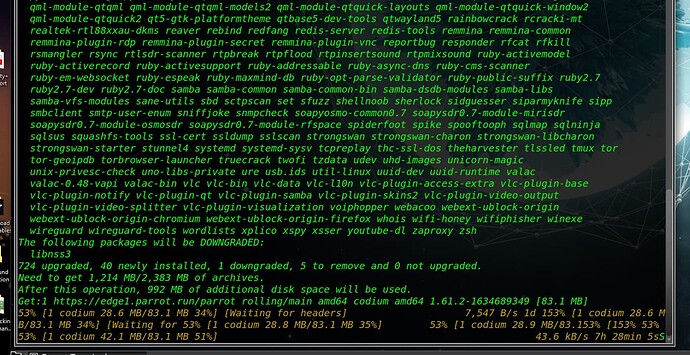 (I’m being told new users can only upload one new image per post. I’ll attempt to attach the second photo in a separate post.)

If you have a lot of photos to share, you can use a free image hosting service. The one I often use is Imgur.

Oh cool! Thank you! I’ll check that out for next time.

I have not used Parrot OS but I searched its documentation and I don’t see just an update command. It suggests using apt package manager.

So, my guess is that you did something on your own and put an alias to update that runs the full system upgrade on its own.

Could you please share the screenshot which shows the output of this command:

It could also be a script and in that case, you may share the output of this command: