@Akito
If this is a Desktop machine, I have sometimes changed the graphics card, and most
times the machine would boot. Did this for a friend of mine not long ago, he is now
running Linux Mint.

I’d check for onboard graphics. If they exist, pull the graphics card. Integral m/b graphics used to be easy for any OS to manage.

NForce 1 motherboards had a GeForce GPU on the motherboard… Nforce 2???

Try powering up with ALL PCIe GPU cards removed, and display cable hooked up to ports on the motherboard… I seem to remember NForce 1 implemented an onboard AGP GPU, so maybe NForce 2 does an onboard PCIe GeForce GPU?

Thanks again, Y’all! Unfortunately this MB has no display port.

No HDMI or DVI or VGA out?

If it’s a Windows XP machine, it has to have VGA available.

Timeline (purely based on my experience) was like this:

This is the timeline according to my own experience. DisplayPort is the #1 thing people look out for now and HDMI is mostly just there for backward compatibility.

How much ram is there in this machine? Recommended to run 64bit is at least 4GB, smoothly anyway.
I know on my very first computer was 64bit AMD dual processor, running only 2GB of Ram.
damn that thing was slow. Cost me eighty quid Pounds from a PC builder up the road from me.
Went on holiday for a fortnight, came home and it had finally booted XP properly.
500GB hard drive, way before SSD tech. I even burnt DVDs using DVD Shrink all those years ago. Took forever to render an ISO. Then one day it started smoking, motherboard committed suicide, along with the ram too. Managed to salvage the hard drive, that paved the way to my next AMD upgrade and my introduction to Linux. My next PC was another Dual AMD Processor, with built in NVIDIA card. Ubuntu 10.04 flew on it, though again that only had 2GB of Ram.

The machine is a home-made in mid-noughties w/ a “SlipStream” XP CD.

@jian_zhang
Your mobo has no onboard graphics, all graphics ports VGA, DVI maybe HDMI and or DisplayPort will be on your graphics card. Find a Linux and or mobo compatible pci-e graphics
card and it might boot. Their could be other driver issues also. Looks like your 8500GT
only has VGA,DVI and HDMI ports, I have a Nvidia GT620 and a GT430, Windows 10 does
not like the GT620 but both are supported by Linux.
From reading the specs on your mobo it should be 64bit capable, the big? is what cpu you are running.

Good point! Will try to find a distro that has the graphic driver. Thanks.

@jian_zhang
Do you know if XP was being ran as 32bit or 64bit? PCLinuxOS still supports my graphics card with the old linux nvidia 390 driver, you may have to use a linux with the open source nouveau driver for nvidia.

Windows XP 64 bit was a very rare beast… barely anyone ran it or used it… I was one… It ran okay actually, dual booted it with Ubuntu 8 (amd64) or something… had 12 GB of RAM helped… XP 64 bit ran every 32 bit game I through at it anyway…

@daniel.m.tripp
None of my PC back then had enough ram to justiy XP 64bit. Even more rare was the XP 64bit
Media/Center PC, I worked on one, but that was as close, as I have gotten.

@jian_zhang
Looks like all you need is to find a compatible graphics card or a compatible Linux. When you
boot your PC, with whatever Linux, try to do a lspci command.

Will try the Pop!_OS, which has a nVidia version, over the weekend without the SLI.

Good evening, y’all! Installed Pop!_OS 22.04 LTS all the way to the end, even used Firefox, etc. But to finish it asked to restart. It’s the old story all over again, except no mosaic, but this 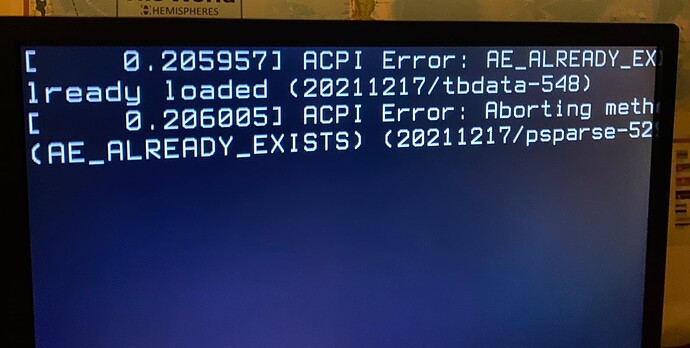 Then I went into Grub, added “ACPI=off’”. It didn’t work.

Can’t find where in the BIOS is the ACPI