I have an old 32 bit laptop with 4Gb ram and an i686 processor.
It currently has 32 bit Void linux
I need a distro that is faster and smaller than Void and preferably non-systemd and rolling release. I dont need Office software and I only want a minimalist browser.
Can anyone recommend a suitable distro?
At this stage I am thinking Alpine, or Q4oS, but they are both systemd.
All radical suggestions considered

DSL has been on my “to do” list, merely for shits’n’giggles… I’ve got what was a kinda “start of the art” workstation machine from the early 1990’s, Intel Panther (the whole thing, i.e. the chassis, was badged intel). EISA and ISA, with one PCI slot… I used to run a floppy based Linux firewall on it as my home broadband router… I’ve managed to boost it from a 25 Mhz 486, to a 100 Mhz with a whopping 64 MB of RAM (it was one of the earliest x86 machines to take 72 pin RAM) - i.e. I’d like to get DSL installed on it…

Pretty sure (don’t quote me) DSL doesn’t use systemd…

One thing I’ve found with certain i686 processors (Thinkpad T40 maybe? T20? I know the T42 can do PAE) wouldn’t boot more modern distros that defaulted to a PAE kernel (not all i686 could do PAE and when booting a PAE kernel - they’d kernel panic). Can’t remember what distro I ended up using, might have been Debian (unlike you, systemd doesn’t bother me in the least).

Distrowatch says DSL is Debian based and systemd in latest release (2012). It seems to be not active. Earlier releases are sysvinit,

When ARCH dropped 32 bit - so did Manjaro…

I was quite impressed with 32 bit Manjaro XFCE on a Samsung N150 “netbook” (dual core Atom, 2 GB RAM and 64 GB SSD). But then again - even that was probably systemd…

You’re really reaching for the bottom of the barrell mate - LFS perhaps? Gentoo?

It originally had XP

You’re really reaching for the bottom of the barrell mate - LFS perhaps? Gentoo?

I actually had Gentoo in it once. Only got as far as the base system without X11. It took forever to compile.
Maybe current Void32 IS the bottom of the barrel

This casual search (32 bit linux without systemd) brought up this link :

AnitX appears to be Debian based sans systemd…

At this stage I am thinking Alpine, or Q4oS, but they are both systemd.

How is Alpine using systemd?

How is Alpine using systemd

Well Distrowatch says it usedsBusyBox and/or OpenRC. ?
That might be a good way to learn about Alpine

There are lots of small Debian derivatives, including Q4os, Slax

AntiX appears to be Debian based sans systemd…

Yeah, it has to be high on the list. It even has runit, which I like
Also wonder about Porteus

Apparently not. That is attractive on 2 counts

That is attractive on 2 counts

It is attractive for special use cases, where a minimal distribution is usually the best option, as it is the case with Docker images.

It originally had XP

I figured that, does not mean it would not run 32bit W7 SP1. It would sure beat any 32bit Linux for hardware support. With W7 you could either dual boot with Linux or run Linux with VirtualBox.

I think my W7 is 64 bit only. Have to check.
I dont think laptop would run a VM . CPU doesnt have it

There are tons of Windows 7 installation medium versions. One of the versions I have, has both 32 and 64 bit options available. I get a lot of my Windows ISO’s here, they do not include activation key, but you can install
them and see if the ISO works. Might be better if the ISO is burned to a DVD or maybe use Ventoy. I know some of the XP laptops had some very small boot drives, and W7 will consume quite a bit of disk space.

Slackware 3.0 was my introduction to Linux in 1995… Found it on mirror.aarnet.edu.au… And just looked - they’re still hosting slackware 3.3!!!

Slackware - predates Debian, its the oldest distro that’s still maintained to some extent… How cool is that - still got Slackware 3.3 from 1996 / 97 : 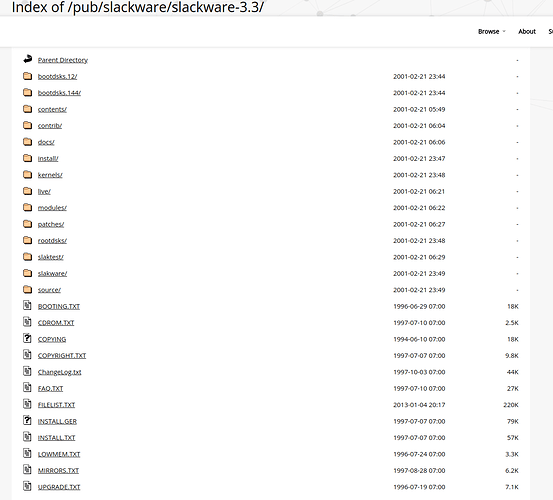 For the life of me I can’t remember in a floppy-less (I still have a couple of USB 3.5" floppy drives - but never use them) world, how to get something like slackware running… I think also that Slackware still uses LILO instead of GRUB…

That was back when the Linux kernel (1.2.13) was MASSIVELY monolithic, modules didn’t come until kernel 1.3x (which were beta kernels for kernel 2.x - Linux stopped this practise after kernel 2 - it if had followed suit, 2.3.x kernels would have been betas for kernel 3). I never tried kernel 2.x or modules until around 98/99 with Red Hat 5… Haven’t used Slackware since 1997ish…

That is almost as bad as ME running Gentoo!!!