A history of the earliest web browsers

i came across this interesting article about the history of the earliest web browsers and thought it was worth sharing. i had originally heard of Tim Berners-Lee some time last year from an article about the his new solid project. the article briefly touches on his creation of the world wide web and its first browser (image below).

after that it goes on to describe the creation of several different browsers (most on separate systems or written in project-specific programming languages) before culminating in the release of Mosaic Netscape in 1994.

i specifically liked this final thought:

But what this complex story reminds is that is that no innovation is created by one person. The Web browser was propelled into our lives by visionaries around the world, people who often didn’t quite understand what they were doing, but were motivated by curiosity, practical concerns, or even playfulness. Their separate sparks of genius kept the process going. So did Tim Berners-Lee’s insistence that the project stay collaborative and, most importantly, open. 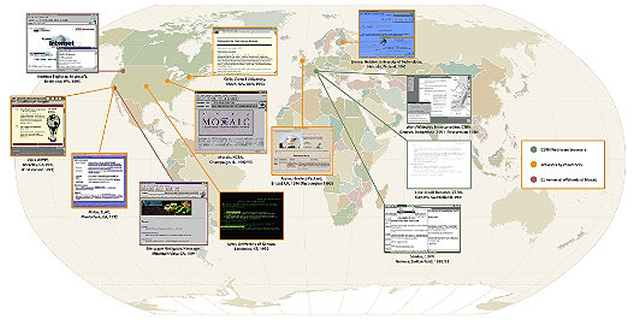 Before Netscape: The forgotten Web browsers of the early 1990s

From the archives: Does anybody remember Erwise? Viola? Cello? Let's reminisce.

Interesting. My first browser was Netscape. I don’t remember any browser before that one.

My first was a hypertext only system called Gopher, from the University of Minnesota. It would sometimes open up a text-only browser called Lynx. My first “browser”, as we know the word, was Mosaic, the UIUC project created by Marc Andreessen. He later took all that code and created Netscape.

I am surprised that you only came across Sir Tim Berners-Lee (born 1955 a great year) last year as he is one of the founding “fathers” of the WWW, although credited for inventing it, he modestly says it was a team effort. His comments last year, I believe about how it has gone since and the worries he has about it were widely published and made for interesting reading. Although he has come in for a lot of personal criticism.

I seem to remember Lynx as being a text based browser that I came across and I believe is still here in 2019, this about 1993 or sometime around then.

I think Mosaic was the first graphical web browser and was later renamed Netscape, again I am not sure about this. All I clearly remember was being shown this thing and people getting excited about what it would mean and expressing concerns that it would de-humanise people.

If you want to read a very good History of computing and the Web/internet pick up a copy of “The Inovators” by Walter Issacson. Fascinating read. My local Library had a copy. it’s available on Amazon also: Amazon

NCSA Mosaic, on a 68000 Mac running system 6.x was my first experience with a “browser”… (actually could have been an early PowerMac [6100] - which would mean system 7.x) - edit : this was at Uni - was a mature age student doing CompSci at Edith Cowan Uni in WA (where Barry Kauler originally developed Puppy Linux)…

Tim Berners-Lee developed the WWW on a Next “UNIX” workstation, basically the pre-cursor of the BSD-ish components that Steve Jobs took from Next to make-up modern OS X on Power arch then Intel (I kinda wish Apple had stayed with Power)…

! Sure I’ve got some photos somewhere and screenshots…

i’d be interested in seeing screenshots. i think that would be pretty cool.

My first browser was Chrome , Firefox and Internet Explorer when I was barely 7 years old in 2012

First time I “surfed” the internet using a “browser” was Lynx - in a telnet session - on a Mac (but remotely to a UNIX server - maybe AIX or Solaris?)… then somewhere or other - a new Mac App called “NCSA Mosaic” got on the Campus (University) Mac SOE desktop - and that was it…

Yeah - I still used IRC and Gopher and even Lynx from time to time - but - NCSA Mosaic was the “KILLER APP” - not sure what UNIX html rendering app (ViolaWWW?) it was that Tim Berners-Lee’s colleagues deployed on NexT to do “www” stuff - I never used it… that was a couple years before Apple brought Jobs back into the fold, and folded NeXT into Apple - I don’t care what anyone says - I love OS X… And soon - it, and Linux and FreeBSD (some people class OS X as a variant of FreeBSD) will be the only surviving “UNIX-like” OS’s left - IBM insist on keeping AIX out of everyone’s reach, and Oracle are doing their best to kill Solaris…

Mark Andreeson was one of the developers of NCSA Mosaic - then he took his ideas and rode off into the sunset with one of the founders of Silicon Graphics and we got “Netscape”… Fast forward a few years/decades and all that “Venture Capital” never earned a razoo, but, we got Firefox… Still seems like yesterday to me… All those billions of dollars of “venture capital”, that never returned a razoo - but we got Mozilla Firefox

Yeah, I also did Lynx. The platform was Gopher, an enriched Telnet program from the University of Minnesota (go gophers!), hence the name. This was circa 1990.

Before Netscape was around, we had Mosaic in university. However, from home I used lynx because I only had a monochrome text monitor (the graphics card had 40K memory).

I came too late for Gopher, but for many years, I was a total usenet junkie. The web was still rudimentary in the mid 90s, but the usenet was full of fascinating stories and discussions.