I’ve been using Google Drive for years along with Tonido to keep my files on line so I could reach them from anywhere.

Then I discovered Nextcloud and thought, huh, why not look deeper into that.

I was using Windows and wishing I wasn’t so, I made the move to Linux Mint which I was very successful with thanks to all those here.

I spent the better part of two days trying to get Nextcloud rolled out to a stable level but encountered all kinds of issues in the process.

Enter, “Linuxbabe”. WOW, what a difference. The guide was second to none for a mentally challenged noob like me who has trouble walking and chewing gum at the same time.

However, after waaayyyy tooooo many attempts to get LAMP up and running faithfully, I gave up and looked over the LEMP setup instead. I had at one point seriously considered dumping my current OS for Ubuntu but had second thoughts about my abilities being tested so instead went with the LEMP version. Still with Linuxbabe of course.

It all went like clockwork. Of course I had to dig into the cloud to find answers to specific questions about “am I doing this right or not?”.

In the end I now have my self hosted site that operates just like Google Drive except it’s ALL on my machine. The same machine I’m using right now.

So, I wanted to find an online cloud storage that was REAL cheap. Enter iDrive. 5TB for under $5 for the first year. Yes, Virginia, there is a Santa Clause.

The amount of stuff I have leaned about Linux these past few days is staggering.

I most strongly recommend ANYBODY contemplating the same path I just took to give LinuxBabe a look over.

Of course, I spent LOTS of time ALL OVER the Internet looking for answers and checking various alternate avenues for this project. So my advise for us noobs is DON’T GIVE UP and remember that the whole world is online now. Your answers are out there.

All the above was actually fun for me. Now, the real pain starts. I need to sift through all my family photos, videos, and files to see what is in there more than once and what needs to be dumped. Then, back it all up to iDrive for now.

I’m not too sure what I should think about this post as it mixes up two entirely different topics.

Telling your experience with your switch to Linux and the mention of the, in my opinion, excellent “LinuxBabe” blog and community, is totally fine.

On the other hand, what you write about iDrive (including teasing prices) looks a bit like commercial advertising to me.

what you write about iDrive (including teasing prices) looks a bit like commercial advertising to me.

I don’t know, it’s fine if you make ad-like comments regarding a service, if it is clearly because you personally enjoyed the service. I have done that several times, because I think everyone knows here I am not a paid shill of any sort.

Usually, if someone is making commercial ads here, they make it as their first post or only talk about that single thing. So in this thread I don’t see a problem, as the OP is a member of this forum for some time and has never seemed as someone advertising commercially for anything. I think, he is just happy how it went, that’s it. I probably would’ve said something similar, if I were in his shoes.

This was meant as a confidence builder for other noobs like myself who are a bit intimidated by computers or lack, as far as they believe, adequate knowledge. Not unlike someone who drives a car without any knowledge as to how it works.
It did seam a bit like an ad but I lacked the know how for alternate information and I personally detest post that talk of solutions in vague terms.

Sorry to put you off so early.
We agree on the promo pricing but, it’s a bandage till I find another.
I’m sort of waiting for the swiss to roll out their own drive product later on. It’s in beta now.

Did I miss something?

I signed up with IDrive to protect my videos and photos, you should too! Get 95% off IDrive Today!

He stated what he did and documented the one service he paid for and the cost and why he was okay paying it. Nothing different than saying … This is what I built. These are my components, what I paid - why Im happy with it - in every hardware forum.

Ok… that is a really good price. Maybe they made a mistake on their end… and if so… you got the best deal ever!!

If they didnt, create way to up the people in the first year.

You did not miss anything. When I just went to idrive.com yesterday, I didn’t get the offer you linked above but one for ~50$ for the first year: 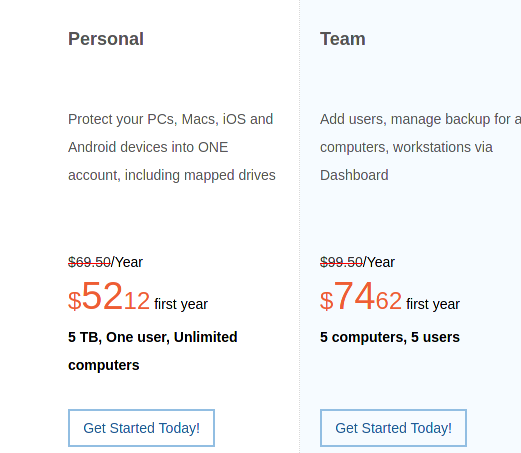 Yep, I got the same page when I went there myself.
The offer seams to be an affiliate offer (techradar).

We've reviewed dozens of the best cloud storage providers, but which one is best?

Looks to be still open.

I checked the offer and 2 things are extremely shady:

I checked the offer and 2 things are extremely shady:

$3.48 a year is definitely a price that isn’t cost covering. No way.

It might be a teaser, though, but at least, I would investigate further before getting myself into a contract.

You can ONLY pay with credit card!

I don’t think, this is an argument. It is simply the most common method of payment for internet services.

It is simply the most common method of payment for internet services.

Back in 2005 perhaps. Nowadays, you are a joke if you only offer credit card payment as a company. Look at any cloud/hosting/VPS/VPN service. I do not know a single provider, except this one, that ONLY offers credit card. Nobody wants to pay with credit card anymore, because a database hack/leak becomes very dangerous, since only those credit card details already make it possible for a third party to use your funds.

Do I need to stop poking the bear?
CC’s are the direct fault of Diners Club. Before that it was store credit or don’t get it if you didn’t have the $$$, or save for it.
My bank is the only one I fully trust anyway. They have never let me down.
I’ll keep all up to date on what happens.
Even at $70 a year for 5TB, it’s a bargain, IMHO.

Still plenty of room at MEGA, and it’s still free.

My bank is the only one I fully trust anyway.

Having worked more than ten years in finance, I’d say from experience: Never trust a bank!

Was ist ein Einbruch in eine Bank gegen die Gründung einer Bank?
What’s breaking into a bank compared to the creation of a bank?

Precisely. Anyone who does, simply does not understand what is going on in our world, yet.

Cryptocurrencies can be still quite cumbersome, but there is only one reason that already makes those currencies always more worth than “normal” money: You do not depend on any bank anymore.
The day banks will go down due to cryptocurrencies will be the day of initiation for the first pillar of societal freedom.

Yes. I know far more than I want to about the international ponzi scheme known as banking. However, that doesn’t hamper my trust but verify attitude toward ANYTHING.
Now, back to the topic.

[berninghausen] “Still plenty of room at MEGA, and it’s still free.” is well worth a closer look.

Do credit unions exist outside the US? I don’t trust banks and have been using CUs for 50 years. I hope they exist in other countries, but I don’t know for sure. Yes, yes, Akito, I’ll go enter it in DuckDuckGo right away.