The YT channel, LearnLinux.tv has just posted up a video series “Getting started with Arch Linux” covering everything from preparation through to installation of the DE.

Interesting, as Arch Linux is supposed to be not so easy as most other mainstream distributions. I heard the installation process is much more manual and the last time I tried Arch probably like 10 years ago, I remember I failed and gave up on it.

Yeah, I tried installing Arch in virtualbox not too long ago and it failed for some reason. lol

I do want to try it again on a spare PC/laptop. It’s a great learning experience to manually install everything and that’s the main reason I want to try it.

How much more difficult is Arch than its offspring Manjaro?

Well, Manjaro is as easy to install as Ubuntu/Mint etc. With Arch, you have to install and setup everything manually via CLI.

In terms of use, it’s not much different after you get the DE installed. Though because Arch is so bleeding-edge, things can break or become unstable more often, from what I understand.

I can see myself going full on Arch in a year or two. There’s something called Hackman Linux out now that’s very similar to Manjaro xfce but loaded with goodies. I’ve ran it in a vb and it isn’t a bad OS. Test and enjoy:

Download hackman Linux for free. Hackman Linux is a beginner friendly distribution based on Arch Linux. Developed by Ben Fitzpatrick and Matthew Moore.

If you’re not familiar with Linux then Arch is a bad idea. I know that you’re versed in Linux so it may NOT be that difficult for you. Basically, it just asks alot of specific questions during the installation.

Installing Arch in VirtualBox is not much different to installing it as a stand alone OS until you get to wanting to use Guest Additions (e.g. to be able to run properly in fullscreen mode). That part is problematic as you need to ensure that the Guest Additions version matches (or is at least not ahead of) the version of Virtual Box running on the host. Given that Arch is a rolling distro and often gets the latest software ahead of the fixed release distros, one careless sudo pacman -Syu can cause havoc.

There are quite a few step by step guides around for installing Arch, and I’ve had some success in following those.

Yeah, I didn’t even get that far. There was some other issue that stopped me from completing the install. Can’t remember what it was, specifically, something related to virtualbox.

I’m planning to pickup a dirt-cheap netbook and try installing it on that for fun.

I tried Arch recently in vbox … meh! It was a PITA sure - but not as hard or drudgeworthy** as I remember Slackware 3.0 was nearly quarter century ago

- but everytime you added a new ISA card, e.g. a NIC or Soundblaster - you had to recompile the kernel! Even if you just wanted to change the DMA or IRQ being used by an ISA device - you had to build a new kernel! Thankfully most of the ISA NICs I used were Intel and you ould set the IRQ and DMA from software (DOS software) so didn’t need to break out a magnifying glass and pair of tweezers to shuffle jumper blocks around

Fun times - but aint got time for that these days… Ubuntu vanillla does most of the things I need out of the box - and I still get my *NIX shell!!! 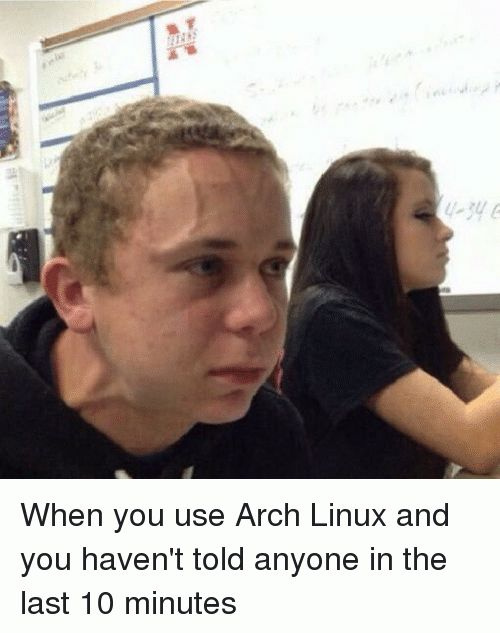 I’ve actually had more fun on cheap computers than anything else. I guess it’s because I know it’s cheap and don’t have any worries if I screw it up. Example: I’ve held off installing Linux on my MSI due to some issues I found that one of @abhishek articles discussed . That article couldn’t of came out at a better time because I was scratching my head. The MSI wasn’t cheap so I plan to carefully review everything before finishing the attack on it.

Same here. Love experimenting, but it’s so much easier and cheaper to do so on older hardware that you don’t rely on for everyday use in case something goes wrong.

For whatever reason I have forgotten my password for this site around 5 times.

And when you do tell them 90% of people have no clue as to what you’re talking about!

If interested in Arch Linux, try ArcoLinux (https://arcolinux.info/). They has quite a few iso with various desktops. They also have scripts to setup a standard Arch Linux from basic to a full blown GUI. I’m using their Budgie desktop. https://sourceforge.net/projects/arcolinux-community-editions/files/