I’ve created a fork of ubuntu-settings(gnome-control-center) for adding the ability to fully switch themes to light, standard and dark and also included some of the common dock-options under dock section. I’ve used it on ubuntu 20.04 and ubuntu 21.04.

I’d like to know whether this helps others ? should I get this into a PPA? or does this need more dock-options ?

Why not add the features directly to upstream?

Okay, if you plan to upstream it, why did you not fork it? I mean fork it, so that Github knows it’s a fork. Just curious.

The code for Settings(gnome-control-center) is hosted on launchpad. So I just yeeted the code from there added the new-options and pushed on github (I should definetly add that this a fork in README to avoid this confusion. thanks for bringing this up)

I’m sorry, I did not understand what you mean ?

I’ve setup this up in ppa for to test/tryout on ubuntu-21.04 (hirsute) 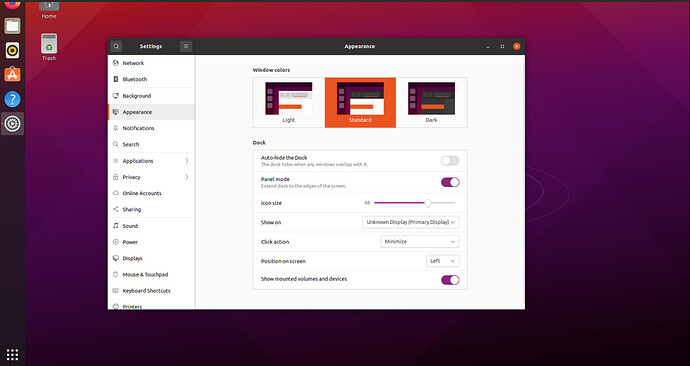 This makes things a lot easier. You’ll probably find a couple of Ubuntu users here, which are willing to test this thing.

Thanks @Akito, I think I’ve added all the common-options that people seem to be wanting. I’ll looking into getting this upstream probably next month-ish.

Is there way you could add testing tag to this thread? I can’t seem to edit the tags for this thread

But mainly I won’t try this because it breaks my “golden rule” :

too many bad experiences in the past with them - i.e. breaking “apt update”… and too many times I’ve been called on to support a Debian or Ubuntu server that some developers have completely utterly toasted by adding PPAs (even attempted to fix some issue on a debian system by reading some Ubuntu forums and installed Ubuntu PPAs on ancient versions of Debian)…