anybody else here a conky user/fan? i think i first encountered it in parted magic while using the ultimate boot cd back when i was still running window$ and trying to learn troubleshooting. i thought it was pretty cool to see stuff like ram/cpu usage and stats right there on my desktop.

installation is fairly easy on the distros i have tried (ubuntu-based, debian-based and manjaro) so far. as usual @abhishek has a nice summary article about it. the configuration file that allows the user to change settings is a plain text file. it can takes some time to get used to the variables and options. there is also a manager program (it wasn’t super reliable the last time i used it [which was probably a couple of years ago now] so i started playing around with the individual options myself) that Abhishek mentions in his article which may be helpful for beginners.

mine is in no way very complicated (though it did take me plenty of experimentation to come up with one i liked. first pic below). it just presents several of the system stats i like to keep an eye on (memory, cpu, internet upload and download volume/speed) right there on the desktop any time i am curious about what is going on behind the scenes. some distros/DE’s are better at creating the transparent background than others. mine example is on antiX. on bodhi (without any kind of screen compositor) it’s background window is a black (or whatever color the user chooses) box. there are some amazing ones that can be found (second pic below: purportedly on elementary os) by doing a quick web search, but (as Abhishek mentions in his article) some of them are very outdated and may not run on a user’s specific system. 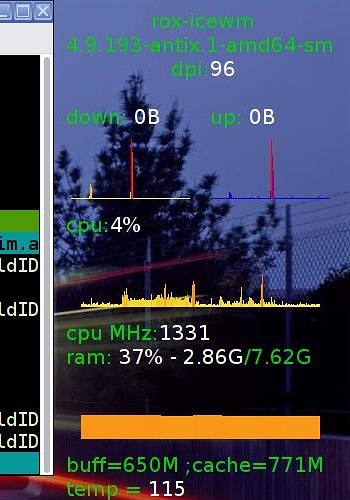 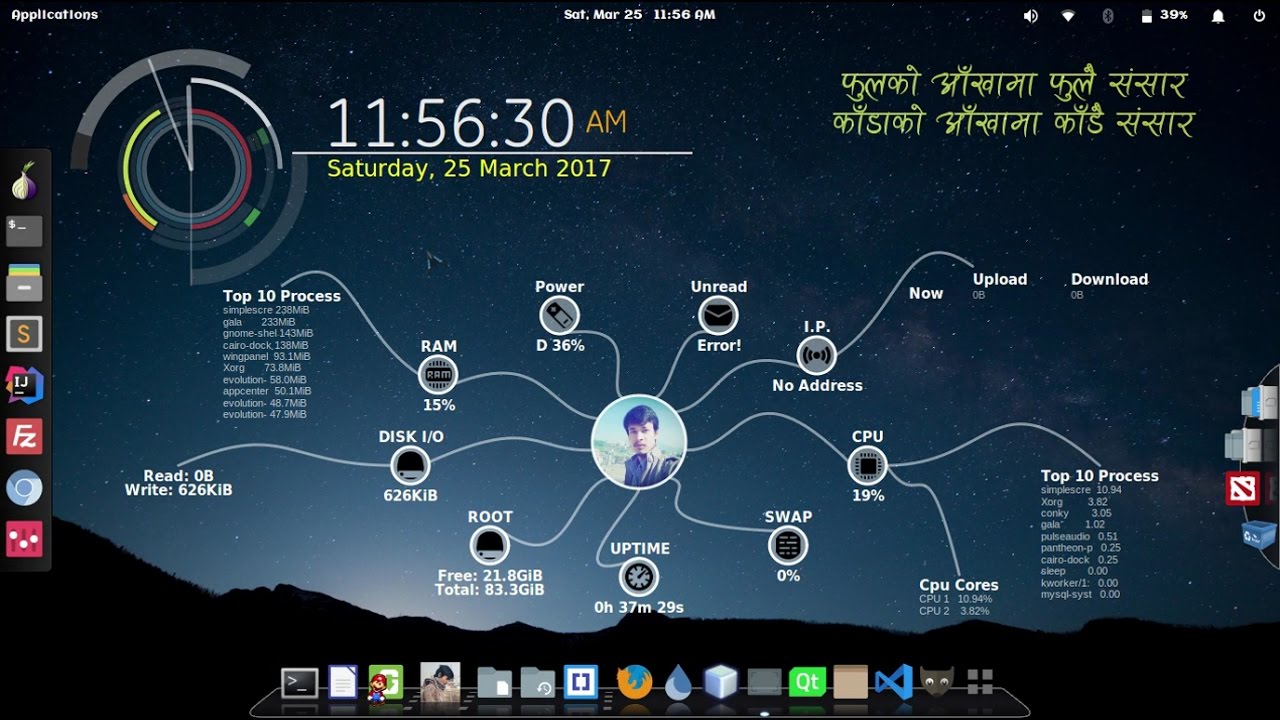 Looks pretty cool some setups, but I hardly ever see my desktop anyway…

I have tried similar in the past, but got information overload which made me worry about things which as I am a born worrier wasn’t great for me - so while many here will find it interesting and thanks for sharing, for now I’ll give it a miss and worry about should I try it

I used to employ multiload-indicator for monitoring cpu, RAM etc. But I found out that this programme writes an incredible amount of log data. With standard settings it writes 4 entries per second! Like so:

I don´t see the point in filling up my logs with that kind of “unneccessary” entries. So I switched to conky.
This programme doesn´t seem to show that kind of behaviour and as far as I know conky has a raputation for being particularly light on resources. And you can personalize it to your heart´s content.

Plus: I´ve created it very “lean” optically so it takes only a small percentage of my screen.

i like to look around in my log files from time to time and haven’t ever noticed anything like that from conky. i agree that it does seem to be pretty light on resources. i would imagine that could change if someone added all kinds of fancy configurations, but i think in general it does great work with limited resources for what i need

I used it from Ultimate Boot CD on Ubuntu 12.04 but haven’t used it since then. I haven’t found I need it for anything. On 4 core desktop CPU it showed which core was working hardest at any time which was kinda interesting as they would all run at 100% for a while then throttle back in rotation to keep everything at reasonable temperature.

Used it with a few distros, such as antiX, and MX, and a couple of others. However, as I prefer a fairly clean DE, I no longer use it.