Could not open lock file. Are you root?

Hi everyone, I’m having trouble with my Linux mint in which I wanted to install odoo13 but I got these errors: 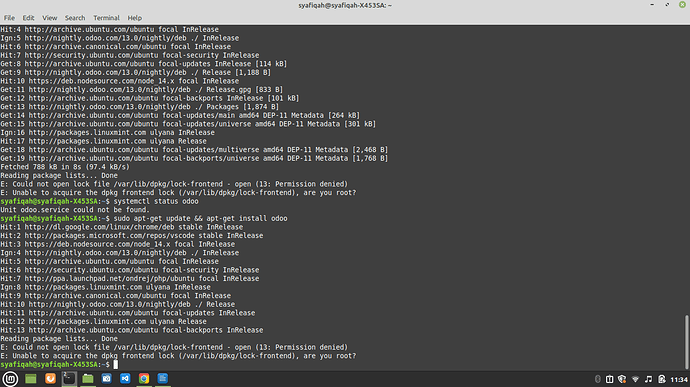 Previously I already kill the apt command just like in the tutorials but I still get this type of errors. Can anyone suggest me other ways to fix these errors ? Thank you in advance

Did you try apt install instead of apt-get install?

What are the results of:
ps aux | grep -i apt
and
sudo lsof /var/lib/dpkg/lock-frontend
whilst having this issue?

That wasn’t a good idea. That’s why I do not recommend such tutorials that just casually recommend to execute very dangerous actions.

If you manually delete the APT lock, you may break your entire operating system!

Never run such commands, if you have little Linux knowledge. Especially not, if it involves manually deleting the APT lock.

In your specific case, I would recommend restoring the operating system from a backup, to be safe. Do not fiddle around further in the wrong direction, like removing the APT lock manually, if you do not want to lose all your data and be forced to install the entire operating system anew.

Personally I would simply reboot before doing anything to my operating system.

You missed sudo in the second command. You used:

The && combines two commands and run them one after another.

Correct command will be:

When it tries to run apt-get install odoo, it complains about not being root because, well, you are not root.

Well, I should’ve looked at the picture a bit longer…

You missed sudo in the second command.

I completely overlooked this. Good, that @abhishek has better eyes.

However: I never try to do stuff like this in one command. I think, it’s preferable to do it step by step.
Besides: It’s always a good idea to set up timeshift for daily backups in case something goes wrong.

How To Backup And Restore Linux With Timeshift - It's FOSS

I fully agree to that.
And I will politely add, that some of us ( me include) often jump the gun too fast.