Long story short - Was forced to migrate to Windoze 11 due to hardware driver issues (unfixable unless manufacturer makes drivers for some custom hardware). Anyway, Windoze is still wack. Everything about it is shit. Graphics are slow even with GPU acceleration on bare metal. Need to defrag after a heavy workload to maintain sanity. BUT, more than all the skunk, security sucks. Downloaded 5 free AV’s and they all have basic stuff missing, data collection is rampant (disassembled all of them using dnspy

After using W11 again for few weeks, I’ve decided to make something awesome for those FOSS people that may be forced for some reason to use Windoze & even the normies can benefit from it. Keeping it FOSS, but plan to input some revenue stream on it, either through 1337 microservices that use ML/AI or ads (later of which I will be directly taking from companies / businesses & not from c*ck sucking ads agencies that spread malware).

It’s a pre-release. All of the features that you see under Dashboard are working!! (don’t worry that IP is cloud system with vpn) 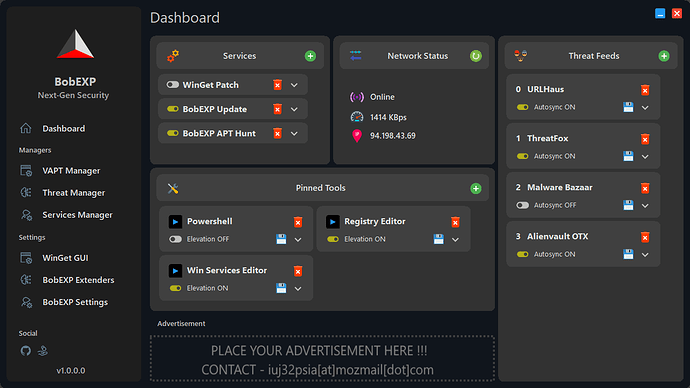 I’m not new to development, but I’m new to grandeur / best windoze app in the world development. So any suggestions relating to UI, features & Menu Items changes are appreciated. As soon as the main features in the Menu Items are completed, the will become a Pre-Alpha release on GitHub with AGPLv3 license.

Much Tanks For Reading My Pasture lol