Hi,
I had installed ubuntu last month and I was using it without any issues.
Recently there was a lot of issues with the files and I decided I had to reinstall ubuntu to fix all the errors.
So I deleted the partition of the disk allocated for ubuntu and tried to install ubuntu again using USB stick.
So everything went ok and then I booted up the system and chose ubuntu, the screen came up showing some errors and it appears to be stuck. I am not able to exit the screen. 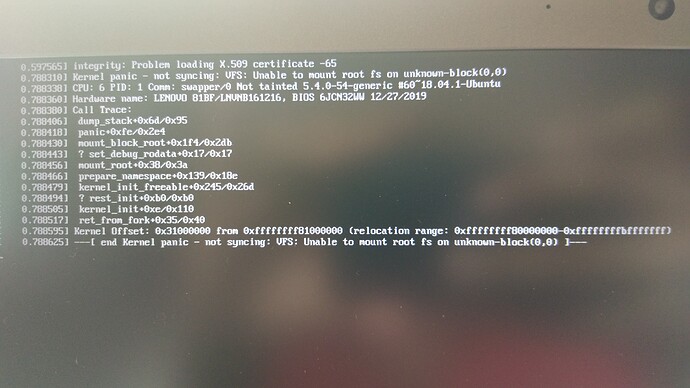 Please help me solve this issue and to exit from this screen.

I installed Manjaro on a spare partition with three other Linux distros and Windows 7. After installation, all of them worked except Manjaro, which went into kernel panic. Error message said: “Kernel panic - not syncing VFS: Unable to mount root fs on unknown block (0,0)” BUT it successfully booted on the “fallback” option under Advanced Manjaro options. Online digging found some mention of this being a known Manjaro issue, which was described as Manjaro developers wanting users to use their …

How to fix kernel panic on linux. Kernel panic - not syncing: VFS: Unable to mount root fs on unknown-block (0,0) happened because your Linux kernel lost the initramfs file. Initramfs is a scheme to load a temporary root file system into memory,...

not syncing: VFS: Unable to mount root fs on unknown-block(0,0)

not syncing: VFS: Unable to mount root fs on unknown—block(0,0)