Everytime I enter a input such as "glxinfo | grep “OpenGL renderer” or “dmesg” I can figure out what it is ment to do from the output it gives … But where the hell do u learn these things from?

Basically by reading, asking and trial and error.

I still remember the first times I sat in front of a Unix terminal and felt completely helpless:

“Where the fuck are A:\ and C:\?”
“Why doesn’t dir work?”
“Where are the *.EXE files?”
“Why do the people whom I ask, speak garbled language instead of proper German?”

At this time, the internet was merely mail -s 'subject' someone@uni.xyz < message_file, so no help from there. So, the man command, books and living people in the immediate neighbourhood were the only sources of information - all with the garbled language deficiency.

I’m not a crack, just a long time user, but many of the real geniuses, some of them active in this forum, went to the same issues in the beginning. So, just have a bit of patience, take step by step, and you’ll see, there’s no magic: Some things are easier than they now appear, some will stay tricky.

But, in the end, it’s curiosity what makes us wiser.

There are books, many of them free…

I remember that one!

By the time I’d tried Linux for the first time (Slackware in 1995) - I was surprised to find that already (bash shell in kernel 1.2.13) things like “dir” actually worked (I’m guessing was probably just a systemwide alias to ls) - quite a few things I was familiar with in MS-DOS “worked” in bash…

Then after being a ksh / bash / UNIX / Linux admin for many years - I’d have trouble remembering “how do I do this stuff in MS-DOS / CMD?” Heck - how do I show the contents of C:\Windows\system32\drivers\etc\hosts file from DOS (other than firing up explorer or notepad)???

By the time I’d tried Linux for the first time (Slackware in 1995) - I was surprised to find that already (bash shell in kernel 1.2.13) things like “dir” actually worked (I’m guessing was probably just a systemwide alias to ls) - quite a few things I was familiar with in MS-DOS “worked” in bash…

How ironic time can become…

Nowadays, we have the opposite:
You can use tools like curl and ls (well, actually these are just aliases to native Windows tools, anyway) within Microsoft Powershell, so the pros coming from Linux have an easier time getting comfortable with Powershell on Windows…

@Akito, you beat me by two minutes. I wanted to write exactly the same.

I’ve tried to like powershell, but just can’t… still seems kludgy compared to ksh, bash or zsh… quite a few of my “wintel” colleagues swear by it, and I can see its value (e.g. automate flushing the DNS caches on 45 Domain Controllers)…

I try to avoid doing anything devy on Windows. I only do it, if I really have to. Luckily it rarely needs to involve Powershell, but when it actually does I am as happy about it as you were.

On single place machines, Windows is quite OK in terms of usability but when it comes to servers…
OMG! I had to deal for years with an MS-Exchange Server because management insisted. It was a nightmare.

At the same time, the development team had their email and shared resources set up on a Linux server: so much easier and transparent to handle. Of course, this is the legacy of Unix, being a multi-user and multi-machine operating system by design.

Also, documentation and resources are far superior in the *nix world to anything provided by MS for professional use.

There is a reason why 500 of the top 500 Computers in the world run on Linux (not even real Unix present any more).

Actually, the advice is great. Usually, I would also recommend to physically browse through them in your local book store and/or library, but, alas, in these weird times, they’re all closed.

Mina,
I just ran a search “kindle books linux” in Amazon and sorted the result for low price. Free books dominated the first seven pages. I don’t know how Amazon works in other countries, but it’s likely one could replicate my search and browse the books from anywhere. Most books sold by Amazon feature a preview option, allowing one to virtually look into the first few pages of the book. And Amazon is always open!
I’m not taking a position on Amazon’s business ethics, just acknowledging its efficacy for those of us who have to pinch our pennies.

Best thing I ever bought for a computer, and you don’t even have to look at the screen!
Digest the information and tips at your own speed in your own time.
None of this online - I need two screens - jive…

Bought quite a few editions of this excellent LinuxFormat magazine and became the oldest geek in town… singing the gnulinux anthem: I want to break free

sorry Distro-Hopping. ( You can buy back issues ) 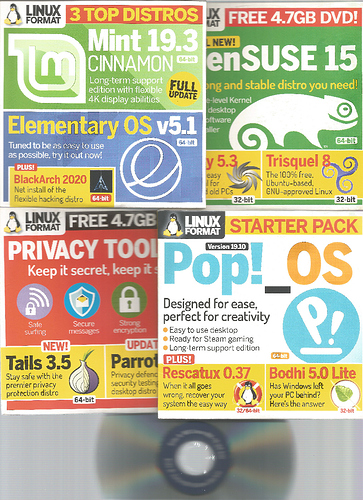 If you need to hit the ground running then give Trisquel gnulinux a workout as there is nothing to learn at all really - it is just that simple; born of logical layout. Totally unlike ubuntu 16.04 LTS which I now consider to be my first mistake with linux - which along with dual boot Win10-Pro has now been wiped from my newest laptop - what joy.

Hi there big boy @daniel.m.tripp I do hope you saved your MS-DOS output to your 8-inch Floppy

MS-DOS output to your 8-inch Floppy

8" floppies were before my time - even the 3174 terminal controllers for the IBM mainframe I “operated” in my first IT job used 5.25" floppies…

I did have a box of 8" floppies - kept them ostensibly for my “wishful thinking computer museum”… left them in a cellar with a bunch of other old stuff (e.g. an original IBM XT) when I moved house ~14 years ago - wish I’d grabbed 'em… I’ve still got some “vintage” museum pieces, old Macs, IBM RS/6000, Silicon Graphics Indys, and a range of Sun Sparc machines (I’m waaay more interested in non Intel / AMD hardware).

I still have a collection of 5.25" floppies (and 3.5" too) - and I even went through the process once of installing a 5.25" floppy drive into a Linux machine and “imaged” them all (dd to the rescue)… many of them reported bad sectors et cetera, but I may try again, one day, more “vigorously” to recover those bad sectors…