Funny, but too often true 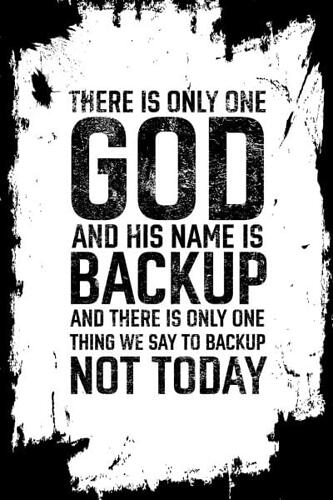 Unfortunately, this is true.

I guess I’m an atheist–I backup every day.

I never keep anything on my computer that’s important, always keep anything I collect Linux wise or important on another drive, or uploaded to Dropbox.

I use Timeshift for my daily ablutions

And Grsync for my home folder.

All the stuff I can’t afford to lose gets sync’d using Resilio Sync - across 6-7 computers (my shell scripts across up to 11 computers)… I don’t necessarily need it all on all those computers - but they’re backups (and one of them is my NAS)… great thing about Resilio Sync, like Dropbox, it keeps archives of stuff you delete - but only leave that feature enabled on computers with enough storage (filled up 128 GB SD card in an RPi several times)…

Been toying with the idea of re-subscribing to Dropbox’s lowest plan… but I don’t need 2 TB in the cloud… I’d be happy with 500 GB… Tried Mega for a while, but Resilio does everything I need - except Dropbox client is more reliable on my Android phone and my iPad pro…

It’s not strictly a backup… but it kinda works that way… Just like the RAID on my NAS is not a backup solution, it’s a DR solution…

My collection of self-made photographs is large (well I consider it large…) and is about 220k strong. A few years ago I tried to access my collection but it wasn’t possible. I cannot remember the exact message but I had never seen it before. I tried dozens of programs to correct the problem but nothing worked. In the end I found a program in China and did a demo test. It ran for over an hour and then I got a message saying there were thousands of files that could be rescued. I bought the program and it did in fact rescue every file. Since then I have 3 copies of my photos on external disks and backup everytime I take new pictures. I also back up all documents as wel on a regular basis.
When I get asked to help people with computer problems I always ask about backups…and 90% of the time I get a negative reply.
I always tell them the same thing: It’s not a question of “if”… it’s a question of “when”

Funny or not, but really not many people use backups, trusting 100% of the reliability of the hard disk or their memory (if the files are uploaded to the cloud, because you can forget the password).