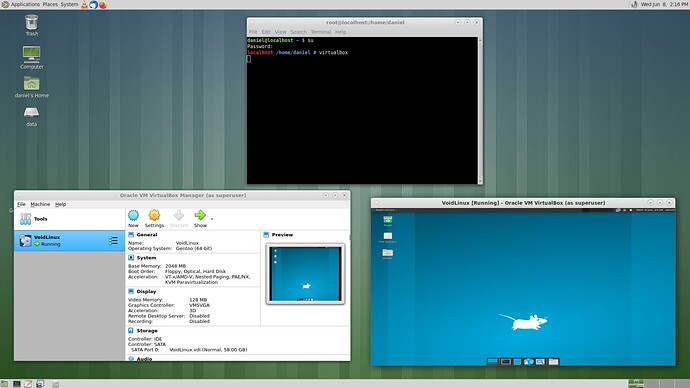 Gentoo Running VB and Void1920×1080 104 KB
VirtualBox can only be started with terminal with either “sudo virtualbox” or with
“virtualbox” when in root. Have Void running in VB, I have it updated, but have no idea
on how to install apps. Took about 3 hours to compile VirtualBox last night.
1 Like
clatterfordslim June 9, 2022, 5:36pm #2

Gentoo is one hell of a tinkerers OS. Ain’t Linux brilliant? The amount of different types, different ways of getting things done, different experiences on whatever hardware, the amount to keep learning never ending.

Ain’t Linux brilliant? The amount of different types, different ways of getting things done, different experiences on whatever hardware, the amount to keep learning never ending.

The same reason why Linux is too hard for a majority of computer users and there basically is no streamlined experience, which is bad design and just makes everything so much more difficult for the average user.

I guess I am just an old man with time on my hand, but not to old to learn, YET!!!

just makes everything so much more difficult for the average user.

Is it a good and a bad thing?? Adds to the security of Linux, the popularity dwindles too, back to how it should be, some would agree. Then there is the other way of looking at it, that Linux will never be popular enough and more and more hardware that relies on Software to run it, that will not be compatible with Linux. The GOXLR for instance, which needs the software booted from Windows first before even attempting to use it in Linux, as otherwise end up with Pulseaudio skipping. I done a video ages ago, without knowing you had to load the settings up first in Windows (I’m a bloke Don’t need to read instructions, find out for Meself.) An hour long video played it back, sounded like I had hiccups or holding back a very bad case of turrets. It even states on their website that the GOXLR is made for Windows.

The problem is the bad design of the GOXLR. No power switch on it meaning you have to leave it switched on, if you don’t want to keep loading Windows up, to use it in Linux. That can become costly with electric bill. It also depends on what Kernel you’re using in Linux too, on whether or not Pulse will recognize it. The 5.4 and 5.13 series of Kernels are fine, any higher then your computer will just say no.
Why they never wrote a script for Linux is beyond me, as a majority of the effects and the sound software derives from Open Source tech anyway. This was only meant to be an example of the good and bad points of using Linux. Got carried away I’m afraid.

there basically is no streamlined experience, which is bad design and just makes everything so much more difficult for the average user.

That is a key issue.
Can we at least say what would be the closest approximation to a streamlined experience for an average user