reminded me of times on GitHub when the devs were like “I don’t give a fuck if my software has an issue, why do you post an issue?!”, so I thought maybe we could all share our bad experiences here that we encountered on GitHub.com. I would recommend to accompany your post with a short explanation of what is going on.

I’ll start with this: 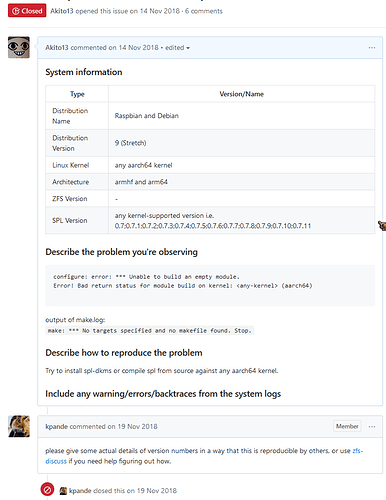 I posted this after trying and failing to compile spl on my Raspberry Pi 3 B featuring a custom built 64-bit kernel. I thought it’d be very easy to reproduce the issue, since you could basically use any version of ZFS for this issue, since it happens with every common version, at the time of posting. Despite that, one of the devs just closed the issue instead of investigating or at least trying to explain what additional information they need. Later, when I updated my post to be EVEN clearer and asked for help again, they just closed the discussion section of the issue, so nobody could even talk anymore, which is just senseless, because the issue was closed, so there is no harm in talking, after the issue has been closed, anyway. To me a clear abuse of power without or with too little responsibility.

Looks like the dev was running away from investigating the issue.