“Sometimes” (but not always - I’m doing it right now - and it’s not happening!) when you swipe the cursor really REALLY fast - it decides for you, that you didn’t really want to switch to another monitor or screen region quickly, what you really wanted to do was display a zoomed out “display” of your monitors and virtual desktops and thumbnails of all your running applications… what is this sh_t? I NEVER want to do that! Like what happens when you press the “Super” key - but somehow there’s some sort of mouse cursor gesture that triggers it - and I really hate it!

I don’t even know what this crap “feature” is called… anyone know? - and how to disable it? Something to do with a “hot corner” maybe ?**

Gnome Settings
And I’ve griped about his before - but - I REALLY hate Gnome 3.x’s Settings applet - it’s crap, and really painful to use on a low res screen (e.g. @ 1366 x 768 on my laptop when it’s undocked)… And things liked “display settings” which you want to find quickly is buried / obfuscated layers deep…

I really miss the Settings app from Unity… and “Settings” in Gnome is pretty much useless anyway - half the stuff I want to tune is in Tweaks… I reckon “Settings” is a dumbed down uber-obfuscated port of the old faithful “Settings” from Unity - and seems deliberately (and sadistically) designed to trip up users who might need to tune “Accessibilty” or “Universal Access” (and I wish everyone would make up their mind what this is going to be called!).

Save dialogs (sometimes) :
That “thing/widget/artefact” in Nautilus and file save dialogs at the bottom right that tries to be smart and pops up suggestions when you start typing the filename in the filename field (it doesn’t always appear, and not in every app save dialog box) - instead of letting you actually type the filename - I mostly remember it from Gimp - but just looked at Gimp now, and it no longer happens in Gimp…

Desktop icons :
I hate them - however - sometimes even when you explicitly turn this feature off in Gnome Tweaks (why not have this feature “out of the box” in the main Settings applet?) - I can still get apps that’ll create desktop icons!!

Screen Shield/Curtain :
Major gripe with this - it comes on even if you have screen lock disabled - when I wake the thing up - I don’t want to drag this dumb useless “Shield” doohicky “away” (up I think) to get to my desktop - there’s a Gnome extension to supposedly disable this “feature” (did anybody actually ask for this feature in the first place?) from Tweaks - but it doesn’t always work…

– footnote –
** Found it - it’s not configurable out of the box in Gnome Settings (what a PITA!) - can only be disabled (there’s probably a way to do it in the CLI using gsettings) using Gnome Tweaks :
“Top Bar” > “Activities Overview Hot Corner” WTF? I HATE this!

Even though it’s one of the heavier DE’s (in terms of memory use), I still really like Gnome. 19.10 is their best implementation of it yet, IMO.

That being said, customizing and tweaking is quite convoluted. Some settings are in “settings” and some are in “tweaks”, which you have to install manually and is required to make some relatively simple changes that should be available by default. And in order to use extensions, you have to install the Gnome browser extension, and then activate it via CLI in order to install any extensions. Why so many hoops? lol. So I’m right there with you in that they need to re-assess how they do all this.

I get that there are Ubuntu-specific Gnome settings, and then Gnome-specific settings/extensions, and that they are not one in the same. But there has to be a better way to organize all these settings in a more unified and intuitive manner.

The swiping mouse quickly issue, as you discovered, is the “activities hot corner” option.

Save dialogues - Yep. Hate this too. When you go to save a file, it should just automatically highlight/select the file name so you can just start typing to name that file. You shouldn’t have to move the cursor and highlight the name manually. That wastes so much time and become a drag real quick…

Desktop icons - Agreed, should be a desktop settings option available by default, not something you have to do through tweaks. You also still can’t drag and drop files/folders to the desktop, AFAIK. Why not??? lol

Lock screen veil - I believe you can simply hit a key (spacebar or enter) to get past that quickly.

Despite it’s confusing and scattered settings/customization options, Gnome is still one of my favourite DE’s. Cinnamon and KDE are right up there too (using Mint 19.2 Cinnamon at the moment). As someone who likes tweaking things, I find KDE to be a bit of a rabbit hole. With KDE I found myself spending way too much time customizing and experimenting instead of getting work done, lol. There’s almost too many options. In KDE I find I have to make quite a few changes to set it how I like it, but it’s not a deal-breaker.

Cinnamon is a solid DE contender for me. Has a nice balance of customization options without getting too crazy like KDE. I know it’s limitations and capabilities and it doesn’t require a ton of changes to get it how I like it. Primarily I just change the main theme, icons and a few other minor things and I’m good to go.

Gnome, specifically Ubuntu’s implementation of it, I have found to be the best-looking out-of-the-box and best optimized DE for my preferences and workflow. I only need to make a few small changes and a few under-the-hood tweaks and I’m ready to use it. With 19.10, it’s the best yet, aesthetically IMO, so much so that I would actually use it with the default Yaru theme (light or dark) and basically leave it at that. No other DE has been quite like that for me.

A lot of this is subjective, but I’m really diggin Ubuntu 19.10 right now. I just think they’ve done a really good job with it, despite the issues with the settings. Having used Ubuntu Gnome many times before, I’ve become familiar with the strange settings/tweaks menus, so it doesn’t bother me tremendously. It is, as you said, an annoyance.

This is how I have 19.10 currently setup in Virtualbox for testing. Mostly vanilla, which is unusual for me: 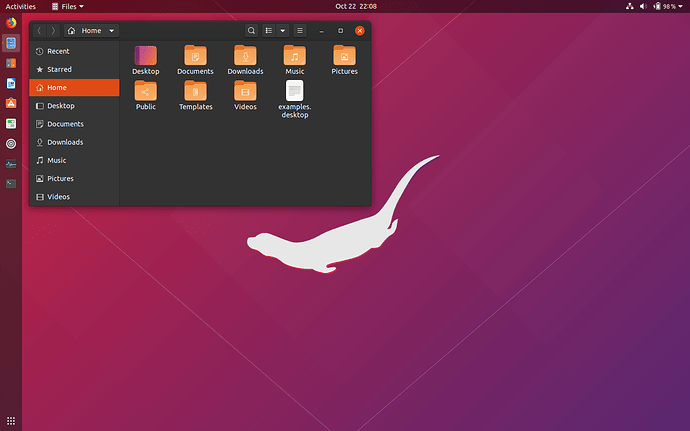 Just thinking, you should maybe give Deepin a try. 15.11 is out now and it’s improved a lot. The Deepin DE is a nice breath of fresh air and really tries to innovate but without going completely off-the-wall. It is Ubuntu-based, so all your apt commands etc. work as usual and the software center has pretty much all the most popular applications available.

Quite pleasing to the eyes and overall, functions similarly to Gnome. The settings menu is where Deepin really shines, however. Everything is consolidated into a single menu system that is fairly simple to navigate. Customization options are somewhat limited, (think of it more like Elementary OS in terms of new user-friendliness), but doesn’t require much tweaking out-of-the-box, IMO.

The swiping mouse quickly issue, as you discovered, is the “activities hot corner” option.

That’s what I wanted to say. @MikeREM Did a better and more terse explanation than I would have, though.

Used it for a while. I decided to use pure Debian later on, but I can still recommend it to people who like it a much more comfortable than just plain Debian. That said, when I used Deepin I got to know the Deepin Terminal. After using so many different terminal emulators, I fell in love with this one and exclusively use this one on pretty much every system, except my servers without GUIs and my laptop, because the screen is so small, I prefer a full screen guake (that said, Deepin Terminal even has a quake terminal mode, but it is unfortunately not so stable on pure non-Deepin Debian).

Just discovered the other day, if you install “dconf editor” from the Ubuntu software centre, it opens all kinds of Gnome settings and parameters via GUI, that you’d otherwise have to edit via CLI. Pretty cool stuff.

That’s why I am sticking with 16.04 Unity for now. I have never experienced the “swipe mouse” annoyance and my system is running disturbingly well. I have tested the Unity version of 18.04 and have installed it for a friend who is quite happy, but as for myself, I reverted to 16.04 almost immediately and will stick with it until something forces me to upgrade. Hopefully, by that time, the annoyances in that version of Unity will be sorted out. Or by that time I might consider something like Deepin.

Just tried out Deepin Terminal… looks okay - except it ignores your window manager settings and places the titlebar widgets on the right (one of the first things I do when I install Ubuntu with Gnome - then Gnome Tweaks - is move them to the left - where they were in Unity [and still in Mac OS]). That’s a show stopper for me…

Here’s yet another gnome annoyance - “gedit”…

This is so frustrating! Imagine the keystrokes/mouse-clicks I save everyday, instead of :
select text
right-click and select “Copy” (or Ctrl+C - except in some PITA apps where you have to Shift+Crtl+C)
right-click in the location you want to paste and select “Paste” (or ensure your caret/i-beam/text cursor is in the place you want to paste into and hit Ctrl+V (or Shift-Ctrl+V).

Instead? I can just select some text, it’s now in the “X” middle-click clipboard (not sure what this clipboard is called, but it’s not the same clipboard as “Ctrl+C” grabs) automatically, and I can just go to another place in a document, text file, terminal session and hit middle-mouse-button to paste (unformatted) text! That’s so easy!

Why doesn’t “gedit” work like Gnome-Terminal? Most of Libre-Office apps are the same (or VERY inconsistent)…