Hi,
I need your advice on how to implement this kind of system because I’m not sure where to start:
Before switching to Linux, I had this back system in my home: 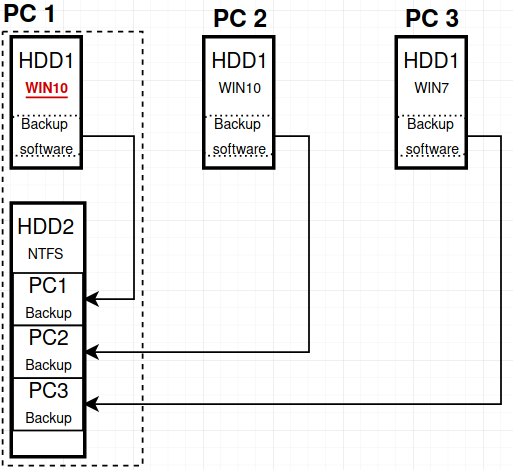 (My PC is PC1)
Whenever a PC was turned on, if PC was on as well, each local backup software would sync up with the respective backup partition on PC1/HDD2.

Now, PC1 is running on Linux Mint 20 and I would like to add the same kind of system here: 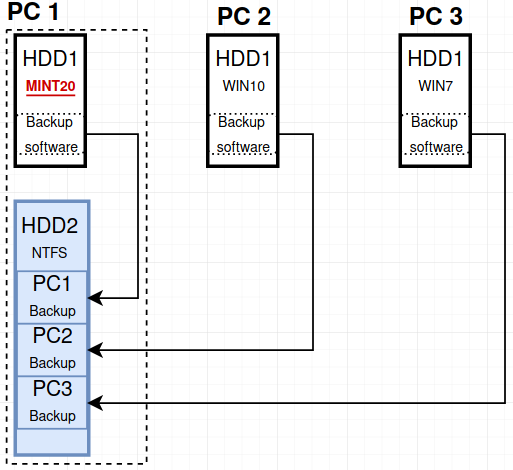 HDD2 is already installed and I can mount and unmount, read and save files with nemo.

Any idea on where to start?
I’m asking for help as this is my main backup disk and I’m trying to be cautious about it

Thanks in advance
Jorge

If I see it right, the backups disks live on PC1. From the perspective of PC2 and PC3 nothing will change if the backup disks are visible within your local network. The only thing you will have to do is to mount the backup disks permanently (proper settings in /etc/fstab) and to make them visible in the local network via samba. Then in Windows you can access them as network drives, just as you probably did before.

As for backups in general: Karla’s project has a nice introduction but if you had it up and running before, you would probably not need that.

Hi Mina,
thanks for your reply.
Yes, the backup disc, with the 3 partitions, is installed in PC1.
I’ll check samba and Karla’s project.
I’ll give some feedback later form what I’ve gathered.

I just remembered: Karla’s Project is in Spanish …, so rather for a minority here, I guess.

Here is a dead easy explanation.

If you have questions regarding mounting the backup drives permanently, just ask. It’s pretty easy, too.

I was just wondering on how to start: I never thought of using Samba for my system.
My backup system is more complex, with more discs, partitions, etc, but the simplified version is the schematic I’ve shown before.
I’ve just installed Samba and now I’m learning about its config and after I’ll see the video

Hi @Mina,
I already did several tests with Samba.
I’m having trouble keeping the original file permissions and I can’t figure out if it’s a Samba’s configuration problem or if I’m missing some important on Linux basics.
This is my Samba config:

This is the original file:
user: a-augusto

I’ve copied the original file to the share folder (mybackup), from one PC to another, with Samba netuser2

In the other PC, with another Samba user, I accessed the share folder, drag and drop the file, I checked the file’s permissionsand I noticed that they were lost:

I understand the original permissions may be lost as the file was transfered from Win10 and (maybe?) got the netuser2 permissions

What am I missing here?

I’m having trouble keeping the original file permissions and I can’t figure out if it’s a Samba’s configuration problem or if I’m missing some important on Linux basics.

I made several posts about how you should never use NTFS with Linux, if there is no really good reason for that:
NTFS does not understand and therefore does not save Linux permissions. So, the permissions will never work, as long as your disks are NTFS-based.

Hi @Akito,
Thanks for your reply.
I forgot that this might be being caused due to the disk being in NTFS

I’m only using NTFS as I already have several disks in NTFS filled with backups that I don’t want to lose and now I was trying to implement the same but on Linux.

Although, all of the tests mentioned in the previous post, the backup partition was in Linux, but the original file was transfered from win10 through my home network using samba that was installed in Linux, as well as the sharefolder.

Maybe I am not as security concerned as others but I don’t have any issues with NTFS shares, in fact: most of my HDD are NTFS disks. I mount them in /etc/fstab like this:

And then in the fie manager of your choice (krusader in my case but I could be pretty much any other):

And then I’m fine … The disk is visible from Windows and I can access it from everywhere like a normal network drive inside the local network.

It “works” but it’s not working as good as a really compatible Linux file-system.
As already mentioned, permissions do not work at all.
Secondly, I already completely screwed an entire NTFS formatted hard drive, because Linux created some stubborn hard link on this drive.
Thirdly, NTFS is not natively supported on Linux, as ntfs-3g is some reverse-engineering product, so there will always be errors in this implementation and therefore this file-system will never be as compatible with Linux as it is with Windows.

So, it is really not recommended to use NTFS on Linux, even if it technically works, to some degree, especially if you do not try to do funky stuff with it.

Thank you. I wasn’t aware of these issues as I never experienced any problems in the many years I have used NTFS drives on Linux at home and at work. Hard linking files also always worked fine for me.

I dunno if money is an issue - but if I was in your shoes - I’d invest in an external USB drive - copy the data over - reformat the NTFS partition as exFAT, and copy it back… As a rule - I don’t normally use external drives for daily use… I don’t like exFAT much either, but I reckon it’s better than NTFS…

One thing I am jealous of though, for NTFS users (if the NTFS disk is set to dynamic) - is growing storage… My “wintel” colleagues can grow a virtual disk in VMware ESX guest, and then tell Windows to expand onto it… no such luck with ext4 or even LVM… sure it’s possible, but it’s far from straightforward… What I nearly always end up doing is add a new VHD in VMware, pvcreate, then add it to the Volume Group, then extend the LVM then grow the FS… it kinda sucks…

Thank all for your kind replies

I’m thinking of redoing my backup system.
I’m getting a new HDD disk, so I can have it in ext4 and start to transfer my old backups to it.
Then, I’m able to work in old disks

Meanwhile, I’m considering @Mina 's answers the correct one because it seems the solution to my question

@Mina,
I’m used to using FreeFileSync.
Yet, I’ve seen the Karla’s project video on it, and she does explain it really well. Thanks for the link!