How to change desktop grid size in Linux Mint MATE 19.2?

I would like to change the desktop grid size, used for “Keep Align” function, to have my desktop icons near the display limit area.

This is what I can get actually with icons size = 100%, and they are too far from display limit area 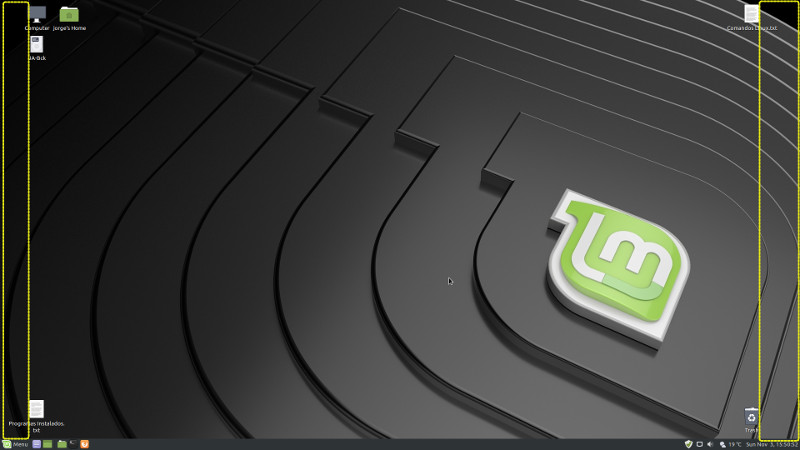 After googling, I only found one way to change this desktop grid size in MATE change the icon view defaults with zoom level in Caja preferences: 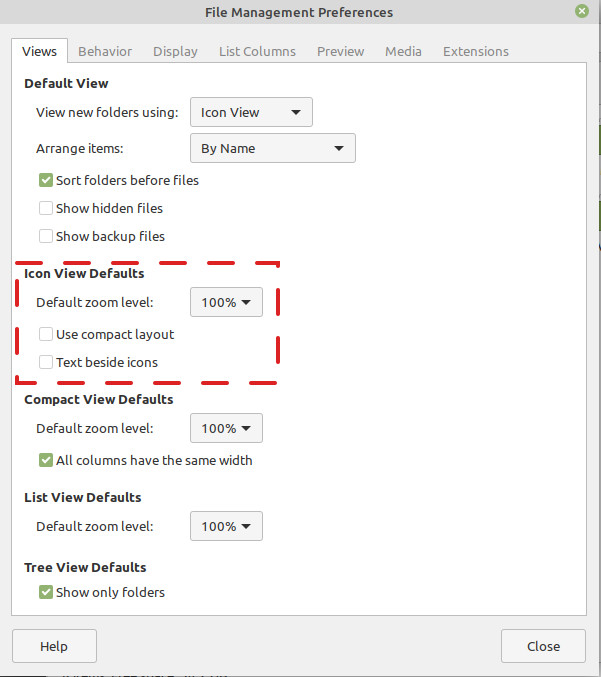 so far the only way i can get them closer is to deselect “keep aligned” (the bottom half). cinnamon (top half) has a slider that is supposed to change the grid, but that still seems farther apart than the mate with alignment turned off.

Hi Cord,
Thanks for the reply
Yes, deselecting “keep aligned” I can move the icons but my goal is keep them aligned

I cannot find too how to reduce desktop icons size for for different zoom defaults
I can only have 100% and the next default size is 66%.
If I can change the icons size, for example to 80%, the grid changes too and I think that’s perfect for what I need (based on changing between 100% and 66%)

one of my other thoughts was to check out online documentation. mate’s community page has a link for a wiki, but last night i kept getting a server not found error (today for some reason that wiki link loops back to the mate home page) so i ended up looking at the archived version. following the steps there i ran gsettings list-schemas | grep desktop and though there were lots of options to then try with gsettings list-keys, it looked like a lot of the same settings that were listed in dconf-editor.

Hi Cord,
thanks for the tip
I’ll check again with dconf-editor again and I’ll give you the feedback

About adding more zoom settings in caja:
I found this info in LinuxQuestions.org and it seems it’s not possible to add it without modify the caja’s code

it does sound like it would take some serious work to get that one setting changed. i think the idea in post 8 about making a feature request sounds valid. the least that happens is that it gets ignored or turned down, but then they know that users would appreciate more options.

Yes, you’re right about making a feature request but I’ll do this request
I know this could be " insignificant" requests but I started my migration to Linux and I always had many icons on desktop, that’s the way I like work, and I found this problem in MATE

You said DE Cinnamon has this option. I’ll try a distro live too check differences between Cinnamon and MATE

back in my windows days, i kept all kinds of icons on the desktop as well. it was kind of my to-do list. i was a little uncomfortable when i first started using bodhi because it didn’t have any desktop icons, but a couple of years later i don’t miss them much. now my home folder is just a big mess

cinnamon does have the slider shown in the top half of my picture. it shows up if you right-click the desktop and choose customize if i recall correctly. i didn’t find that the icons were any closer to the side of the screen, but your experience may be different of course. there was a setting in dconf-editor in cinnamon where you could change the grid spacing from 1 (default) to as low as 0.5, but that also didn’t seem to make much difference for me. 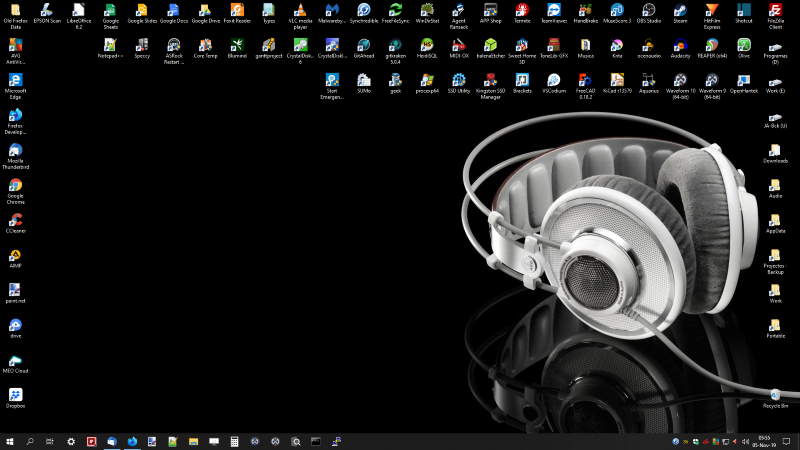 I “need” icons on desktop…

BTY, If I want to change to Cinnamon DE, do you recommend a clean install or I can install cinnamon DE along with MATE DE?

i believe “best practice” advice is a clean install. i don’t do a lot of de testing personally so i have never tried to install multiples with bodhi. i have only ever done a full install of regular mint with cinnamon. the mate install was in a vm as i said, but definitely separate from the cinnamon one.

you could always take the option for a spin on a persistent usb or vm and see how it goes.

my first install of debian gave me the option of multiple de’s before i had heard that it was best not to do so. what i noticed is that there were some menu items that were for openbox that didn’t work in lxde. it was the same with void where an lxde install also had openbox options by default that wouldn’t launch. i have read stories about config files that might get messy if shared between de’s, but have not had any direct experience with that.

OK, thanks!
If I choose to install Cinnamon I’ll do a clean install

I only found this on dconf-editor: 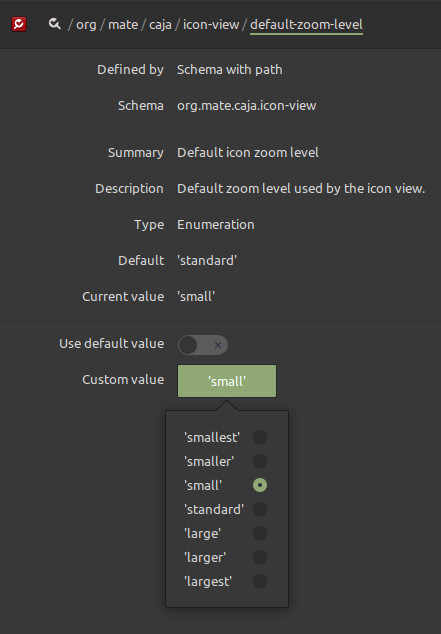 I already tested Cinnamon but, for now, I’ll keep MATE and wait for developers reply

Conclusion:
From what I realized with MATE 1.22.0, it’s only possible to change the desktop grid size when the icon size are changed as well

Cord,
I want to thank you for all the help you gave me on this topic

i was happy to take a look (even if mostly to just confirm what you had already found). i had seen references to dconf-editor in some posts or threads here or there so it was interesting to see what it was useful for. i think the coolest find was your linuxquestions link about building caja from source and changing things there. that would have never occurred to me and is well beyond my present skillset, but is interesting to keep in mind for future “i’m bored. i wonder what i should tinker with today” situations.

hopefully you will hear back from the developers soon or find some other way to get you where you want to go.

i just recently got an older thinkpad X61 back up and running after years of being down with a dead fan. i hadn’t booted into that win7 in ages and it was interesting to see the desktop mess i lived with back then. i am more of a “don’t keep aligned” person so there were clusters and blobs of icons all strewn about. i understand the desire to eek out as much usable space as you can get.

still looking through the code…

but even so it would take me a lot more looking to figure out (if i even eventually could! so many moving parts

) how to replace caja in a working mate desktop environment like was mentioned in the linuxquestions thread. chroot in maybe? really just guessing at this point.

apparently the answer is now: i just might be.

i followed this post and found the icon sizes (as suggested) in caja-icon-info.h. i haven’t done much building from source so this may all go flop, but in case it doesn’t since #define CAJA_ICON_SIZE_STANDARD 48 i will try setting #define CAJA_ICON_SIZE_SMALL 32 to 38 (80% of 48) or 41 (85% of 48) which you mentioned in your first post. which would you prefer (if this all actually works

after running ./configure, caja versions from both github and the mint repos are throwing errors about missing versions of mate-desktop-2.0 (for example) and two other packages that aren’t available in the mint repos so i don’t see a way forward with the build. i just updated my install and it lists a mate-desktop version of 1.22.0 and i can’t figure any to suggest/request of/redirect the process to look at the versions i have installed instead of the ones it thinks it needs.

Cord,
Don’t waste your time on it, seriously
You already did a great job trying compiling caja to add a different zoom level👍