I’ve had over heating issues on my laptops from time to time, so I like to keep track of what’s going on. For the past about 6 or 8 years I have been using Conky to monitor my systems.

This screenshot shows one of my recent LMDE4 installations. 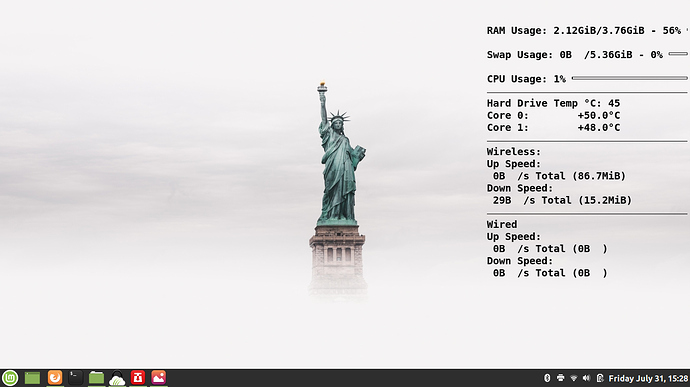 BUT I have just run into problems while trying to include a copy of the conkyrc file that created it. It’s a txt file and the system doesn’t want txt files apparently, just pictures.

I put this conkyrc file together a few years ago, from pieces I found here and there around the web. I am thinking that maybe someone else would like to tinker with conky and would like to see what I’ve done.

And I am also curious as to whether anyone else may have some conky code that I could use. I have always wanted to know about which processes or programs are creating the web traffic
that conky displays. That would be my main interest.

But the first problem is for me to find out how to share txt files on this forum.

i believe the easiest way to share your conkyrc file would be to copy the text and paste i into a post. if you do so, it would probably be a good idea to put it in a quote box so any lines that might be longer will be a little easier to read.

i noticed that your wired internet was shown even though at the time your traffic was running through wifi. i haven’t added anything like it to my conky.conf file since my systems stay wired almost exclusively, but have seen others that use a programming “if” statement to make one or the other not appear when it isn’t in use.

back in my windows xp days i used to keep the task manager icon in my system tray since most of my computers were second-hand and had minimal specs. i always thought watching the cpu graph was both interesting and informative.

my conky looks like this (bonus htop since i always run that as well): 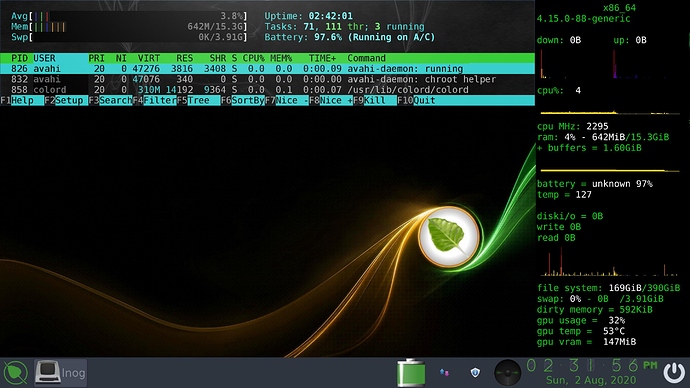 Is that something else at the top of the screen? I’ve never seen conky looking anything like that, but I realize that it can be placed in any quadrant of the screen.

It’s probably fairly easy to tell that I like a minimalist look, so the idea of only displaying the wired speed when it’s in use is a good one I think. I usually use just wifi, and for years that was all that displayed. But the past year I’ve had new internet and a new router, and that made it lot more convenient to use a wired connection.

Yes, I can past my conkyrc into a post. There are no really long lines, and I won’t put anything else on that post. Just paste in the copy of my file.

#if wifi or wired speed does not show on a new install, open terminal and run: ip link show
#then put the results in place of wlan0 or whatever
#changing wlp2s0b1 to wlp2s0 to try that

So I just got rid of the disfigured text at the beginning of my conky file that I pasted in.

And it’s probably obvious to everybody, but the function of the last 3 lines in this file are solely to remind me exactly what to do if I get no speed reading from a new install. These lines in the rc file don’t do anything.

Is that something else at the top of the screen?

yes, that is a program called htop. it is probably a bit of overkill to have both that and conky running, but i do so anyways. i mostly use htop to keep an eye on my top three cpu using processes.

there may be better conky guides out there, but this is the one i usually use when i am trying to figure out something new: http://www.ifxgroup.net/conky.htm

the “if” setting/conditional i was thinking of is if_up. you can click this link and it will take you right to the description: http://www.ifxgroup.net/conky.htm#if_up

apparently there is another part to setting it up called if_up_strictness that you would need to add to the settings at the beginning of your conkyrc: http://www.ifxgroup.net/conky.htm#if_up_strictness

That looks good, thanks. I have some yard work to do this afternoon. I will return to conky this evening. Thanks for your help.

Except those links you sent will not open for me. They’ve all timed out at least twice now.

So then I used DuckDuckGo to find ifxgroup.net/conky but trying to get in that way only timed out too. It may be my security settings and add-ons on firefox.

I see this ifxgroup.net will not let me run no-script add-on. I get a nothing to configure notice. I usually stay away from websites that give me notices like that.

I have been at war with Goofle et al for slightly over a decade now. Any scripts with google in the name are definitely untrustable in my opinion.

I usually use opera browser to test websites to see if something about my Firefox settings is keeping them from connecting with me, but now I have a date with a lawnmower.

I got into that manual, and it does look very useful. Using Opera made no difference, so I turned my VPN off, and that worked right away.

I use Torguard and the IP of the server I connect to is on some kind of Google blacklist, and I have to turn the VPN off to do certain things. Now i can add reading any of ifxgroup.net’s web pages to the list of things I can’t do when connected to torguard VPN.

Does anyone out there use Protonmail’s VPN? I’ve been thinking about switching from torguard for a while now.

this is a listing of the variables from conky’s own sourceforge page: http://conky.sourceforge.net/variables.html

I have always wanted to know about which processes or programs are creating the web traffic that conky displays.

this page (also from the conky github) has a lot of conky screenshots and example configuration files: https://github.com/brndnmtthws/conky/wiki/Configs

one of them has some internet traffic displayed: https://raw.githubusercontent.com/wiki/brndnmtthws/conky/configs/drphibes/screenshot.png

this is a link to the conf file where it shows the variable being used is tcp_portmon: https://raw.githubusercontent.com/wiki/brndnmtthws/conky/configs/drphibes/conkyrc

Thanks for your help. I appreciate that. I’ll get this figured out. Kind of busy now, though.