I Loss my printer

It is like Linux does not see the printer.

is it a network printer?

starting on the hp page for that model, i was redirected to this page which recommends installing hplip and offers to take you to a download page. there is also an hplip package in the repos that you can install through your terminal. i checked my 19.3 vm and it shows that package as already being installed though so it might already be on your system.

The printer is a locally attached to this desktop PC.
I d/l’ed and ran hplip. After running for several minutes, it stop with an error. “There was a problem opening the file /home/easyt50/Downloads/hplip-3.19.12.run.”
The screen is lock and will not let me copy any info from it.

can you run apt list hplip to see if it is already installed? it was on my 19.3 vm.

i couldn’t run hplip as a command so i took a look at the hplip ubuntu package page and found this other page with hplip-related packages. hplip-gui looked like it might help so i installed that through the terminal and then found an entry called HPLIP Toolbox in my menu. that popped open the following message (i don’t have an hp to test it with):

that output shows that hplip is available in the mint/ubuntu repo. for anything that is actually installed, you will get [installed] at the end of the line like this:

i’m not sure what that ppa is, but you can install both hplip and hplip-gui with apt. so sudo apt install hplip hplip-gui should do the trick.

Thanks @cordx for walking me thru this. I now issued hp-setup at the terminal, it found my printer, but is now asking for a PPD which is a file that “describes the font s, paper sizes, resolution”. So now I need to find or build this file. It seems like I had to jump thru a lot of hoops to do something so simple as to print. I don’t remember it being this hard way back on my old DOS 286 PC.

did you try the HPLIP toolbox program in the menu? it seemed like that might discover those settings for you.

@cordx, you are very helpful and thanks for your help, but I gave up.
Something as simple as printing that worked a week ago and now I have to go load programs to find and configure not only the printer, but also the default PPD!

[ I restored Mint using Timeshift back to Jan 05. And now the printer is working again! ]

It says solved? I will put my comment here, I may be of some use, I have HP envy 5640 it is wireless, once, 2018? for what ever reason, I hooked it up with the USB cable and not wireless WiFi. It would not work on WiFi after that, left it on cable, but for laptop was inconvenient, It would not see the WiFi after that, I tried every thing, finding my way all the time, all hit and miss, I tried turning modem, and ever thing off, reset modem, tried the cups thing in terminal, uninstalled printers played with drivers over and over, but a few months later i happened to go through all the driver setting again, (was updating linux mint cinnamon 18 or 19 at the time) when ever the update manager indicated, never change any or loaded any kernel’s, back to the few months later bit, I happen to go through the drivers and just changed a lot, and then it all worked, so my problem was in the setting in the drivers, where you set up a printer, Have not got a clue what I did, but all the Linux Mint printer settings never needed touching before, when ever I put a new distro on it was always automatic it just printed. So that made me sit up and take notice a bit better. What I do need is something to record the screen or what ever I am doing, so I can go back over it later. Thank you all.

@Lennox, yes I agree. It good to document changes esp as I get older and don’t recall as well as I use to. I marked this solved b/c I was able to print again, but really the problem was not solved. I had to back out the Mint supplied updates to be able to print again. What going to happen, if I put the updates on again?

if you open up your printer properties, do you have a uri listed under settings?

when i lost my printer last year, i was pretty sure it was because of a DE upgrade. if i am not mistaken, i recently saw an upgrade to cinnamon come through on my vm. i believe knowing the uri can help you reset the printer if you happen to lose it again.

Didn’t know how to take a screen shot and have not seen this setting page before. So, I learn 2 things today. Thanks.
Here is what my pop-up looks like today when I click on printer under Admin. 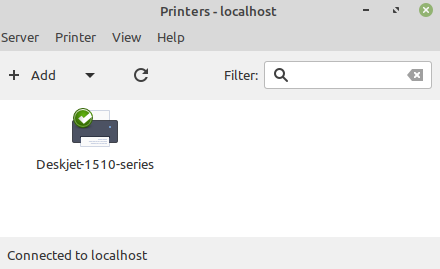 So yes, if I right click on the printer pic, I get a similar screen. But when I was having the problem of not being able to print, this pop-up showed no printer and I could not perform an add.

if you clicked on add, did it do anything?

@cordx, this idea of PPA’s is still not falling in place for me. Is there default / approved PPA’s for Linux and then other PPA’s for products not approved by Linux Mint. To get to the approved PPA’s I do not have to perform an ‘add-apt’?