I have a client with a Acer laptop around 10 years old, came with Windows 8 and she upgraded to Windows 10. But that failed to boot after a Windows update with a blue screen as usual.
I got involved and said … don’t do Windows… let’s do Linux mint
Hence 2 hours later Linux mint 20 installed 64 bit mate.
Superb as always
But 2 months down the line error initramfs run fsck to fix
Found 20 plus problems so repaired.
Put it down to her use …
But back 1 moth later with same errors
Again ran the fix with manual fsck 20 0lus issues fixed
Then did update from 20 to 20.1
Client went away

Next step would be erase disk and 're install

Or change disk as cost minimal

But could it be a fault on mother board and how to check with disk write ?

Found 20 plus problems so repaired.

Do you remember what these 20+ problems were about ?

Good question … did not note them all but first line was

Then several different messages but not noted

Would sudo e2fsck -c /dev/sda2 have done the correction ?

Yes. of course
You are correct and I had seen the

Note : Before running e2fsck command, you just make sure the drive is not mounted.

The story makes me remember of cases with failing drives.
Did you look into SMART attributes?

How do you check smart attributes?

Gnome disks report that if you want a GUI method. 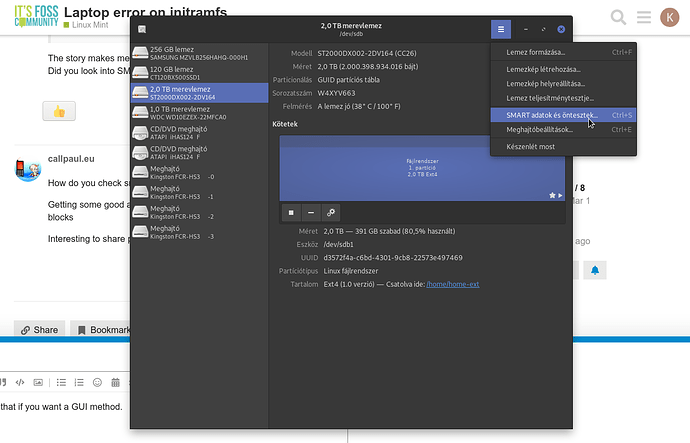 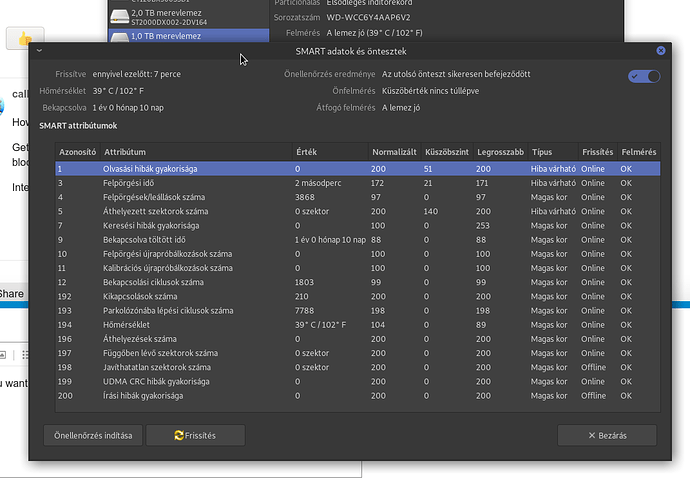 But there’s a cli tool as well, install the package smartmontools, and execute
sudo smartctl -A /dev/sdX
You’ll see the report on the terminal.
The “RAW_VALUE” is the actual data, so for example “1 Raw_read_error_rate” should be zero, if it’s not a Seagate drive. Seagate treats this data really as a ratio, and the upper 16 bits shows the error count, the lower 32 bit counts all the reads.

Will go give that a test, thanks.
Trouble is I clicked to repair so problem fixed and if it fails again it will be too late to run this … bit of chicken and egg
But appreciate your help

You can check SMART data in a well working system as well.
I’m not saying that drive is going to die any soon, but…
Such problem you just repaired may arise becuase of sudden power outage in the middle of an update process.
If you evaluate SMART data as completely normal, you’re done. But if there’s something suspicious, for example SMART shows there are reallocated sectors, then I would not consider that drive as reliable.
How important is the data stored there? 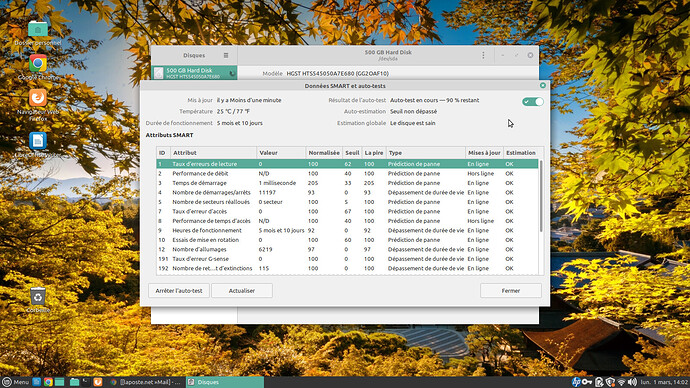 But the attributes have their number, so I see this drive is OK so far.
However, attributes 196, 197, 198 are not on your screenshot.
If those are zeros too, then this drive seems to be completely OK.

French letters are hard to follow … ha ha
Imagine having to reply in another language and explain when the language uses e when we use I and e u is mixed … usb ssd, everything we just roll off the top they change
My wife translates for me when I pronounce different Yorkshire accent is different
Cheers