I have Lubuntu 20.04 on an old laptop. I like it. I’d like to put Pop OS 20.04 beside it and evaluate them side by side. Pop isn’t making this easy. First thing to note is that this is a BIOS situation, not UEFI. I’d try rEFInd if I was booting UEFI.

I’ve got Pop 20.04 live on a USB stick. I use mkusb for this. The first thing I found was that mkusb won’t make a persistent live installation of Pop OS. Ok, well, I didn’t really need that but it would make trying it out easier. So I thought I’d dual boot it beside Lubuntu.

This seems not to be straightforward. The installer doesn’t offer the option I’m used to seeing with Ubuntu flavors to install along side the existing system. I resized Lubuntu and left half the hard drive empty and tried it anyway. The result was that my laptop would only boot to Pop OS.

I monkeyed around with grub in a Lubuntu live envrionment and broke it completely. I figured I was missing something (duh) so I deleted the partition where the new Pop OS lived and fixed grub to boot Lubuntu. Now I’m back to where I was before I attempted to install Pop beside Lubuntu.

The way to do this for now seems to be a bit of a mystery. I read that System76 intends to put the “install alongside” thingy back into their installer in a future release. I’d rather not wait for that.

What would you do?

I never rely on the automatic installation methods, ever. I always partition the hard drive manually and install the OS manually. In Ubuntu-speak: I would do “Something else”.

If you just want to try it out, you can make a single ext4 partition out of the empty space. Then, when installing Pop!_OS you would choose this empty partition you just created as the installation’s target. I would also turn off GRUB installation and then configure the original GRUB with Grub Customizer to show the new OS.
Done.

If I want to seriously install an OS, not just for trial purposes, then I would create several partitions for each Linux file system part, like /home, /usr, etc.

I’ll try this. I don’t remember seeing how to “turn off” grub installation but I should try it and report back. I’ll just say that I did try Grub Customizer the first time. I did it from Pop OS because Pop was all that I could boot at that time. Grub Customizer didn’t detect Lubuntu or add it to the Grub menu. It was after that that I screwed up Grub totally by trying to do something in grub-repair. The difference between what you said and what I tried was in turning off Grub installation. And, this: Something Else doesn’t turn up in the Pop OS installer. If you’ve actually done this installing, first, Lubuntu (or any Ubuntu flavor) and the Pop OS, then that’s promising advice. I’ll let you know.

When you do “Something else” in Ubuntu, then there is an option below the list of partitions to not install GRUB, at all. Not sure if Pop! allows this, as well.

Yeah, this is not happening as you describe. Not installing Grub is not an option that’s offered. In fact, working with the Pop installer fairly summarizes the whole problem. It will install fine if you give it the whole machine. Whether you could install it first and another flavor second, I haven’t tried it. But it seems likely because every other intstaller besides Pop would offer you the side by side option. I’ve read that you can choose not to encrypt the system partition by default but I didn’t even see that option in the installer. This may or may not be a reason why Grub Customizer didn’t find Lubuntu when I ran it in Pop OS. I can’t guess but I’ll tell you this: when it comes to “Something Else”, here is where we see that the Pop installer, its self, is something else. This looks to be a case where, if you’re going to put Pop in second place, you get to monkey around with Grub manually. I’m willing but my first try was a disaster.

Grub Customizer should not be needed, unless you are changing the boot order. I usually just run “sudo update-grub” from a terminal, if it is legacy boot, from the distro that boots. Which is usually the last distro that writes to the mbr.

I’m getting the feeling that Pop OS is not going to play nice in a dual boot setup, at least insofar as being easy to get going in the first place. A couple of things suggest this. https://support.system76.com/articles/dual-booting/ is an overview of dual booting with Windows but probably applies to an all-linux setup as well. Here we see “To dual boot Pop!_OS alongside another OS install Pop!_OS first. Then once booted into Pop!_OS use GParted to resize the root partition to make room…”

Later, when considering the case where Pop OS is not installed, they just provide a link to download it, seeming to suggest that you do that and then go back to the prior situation to install Windows or, by implication, whatever.

If you’re in a UEFI situation, Pop doesn’t even use grub. This would probably be easier to do in UEFI but that’s not what I’m attempting. Encryption by default in a dual boot is probably a terrible idea and maybe even impossible. I didn’t see a way to choose no encryption. I think the odds are long that I’m not going to figure this out.

If there’s someone who has done what I’m attempting I’d like to hear about it.

I have just finished installing Pop OS in a dual boot with Linux Mint. The option to for the grub install does not happen until after the first reboot of Pop OS. I got a splash notification on where and if I wanted to install grub, I chose not to install grub. After updating and rebooting Pop OS, I could only boot into Pop OS. What I had to do was run “sudo apt install os-prober” after that I ran “sudo os-prober” grub then was able to find my Mint install on /dev/sda1, I then ran “sudo update-grub” from Pop OS, and after reboot I was greeted with a grub boot menu. 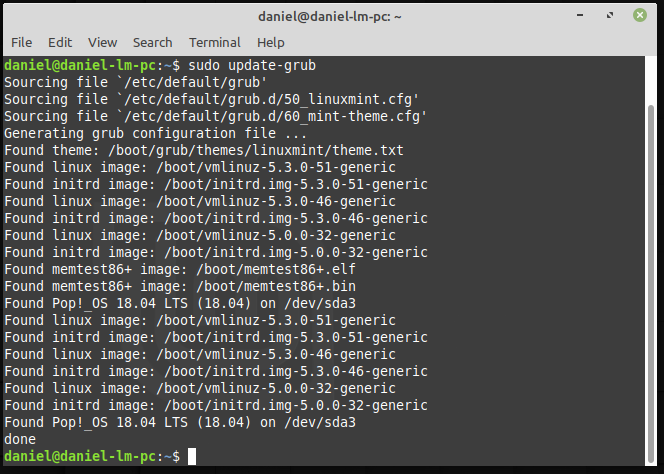 This is the screenshot from my Mint, after running “sudo update-grub”. Your dual boot should work with Lubuntu . Good luck!!!

“To dual boot Pop!_OS alongside another OS install Pop!_OS first. Then once booted into Pop!_OS use GParted to resize the root partition to make room…”

Okay. System76 and its Pop!_OS suck. This advise you coincidentally quoted is already bullshit. You should never resize a root partition with Linux already on it, except in emergency situations, because resizing can corrupt the data on the partition (which is also a warning in gParted every time you resize a partition…).

The option to for the grub install does not happen until after the first reboot of Pop OS.

I chose not to install grub. After updating and rebooting Pop OS, I could only boot into Pop OS.

This does not make any sense. Clearly GRUB was installed by Pop! and it wouldn’t have made any sense to decline the GRUB installation after GRUB was installed. The reason you only booted into Pop! Is because it installed GRUB automatically and overwrote the previous one, if there. That’s also why it didn’t see the other OS (which could’ve been discovered by Pop! automatically as well…).

Seems like Pop! is utter garbage. If the OS itself is nearly as customizable as the installation itself, then everyone should just stay away from Pop! and use Ubuntu instead, since it is based on it anyway. What a waste of time this OS is…

4dandl4, I’ll definitely try this at least one more time because I’m just experimenting here to learn something and I want it to work. What you describe is close to what happened to me but I didn’t get an option to install grub on the first boot.

Now, Pop OS doesn’t use grub in UEFI and so, in that case, it would not have installed it with the OS and you could still see the same thing I saw - that only Pop OS will boot after installation - and then had the pop up offering to install grub and etc. Is your installation UEFI or BIOS?

The part about os-prober and update-grub I have not tried yet but I will and report back here. Might be a couple of days. I also need to discover how to turn off encryption by default. Encryption is good stuff but not, probably, in a dual boot setup.

What can you tell me about whether you are in UEFI or turning off encryption?

You only need grub installed once. The only reason Pop OS did not find Mint was because os-prober was not installed, after the install of os-prober and then running sudo update-grub, the Mint partition was found. 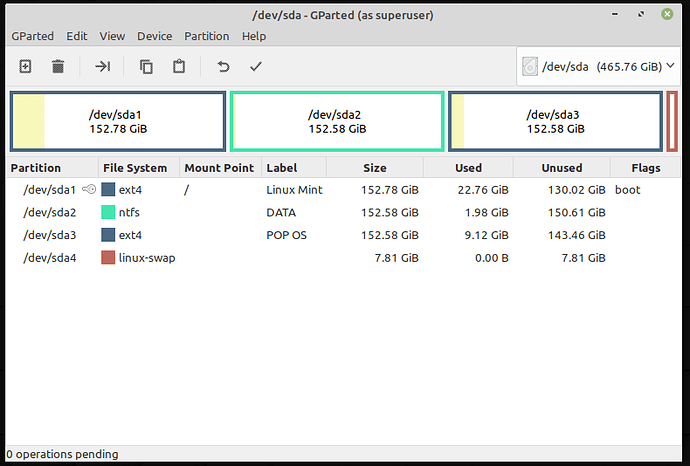 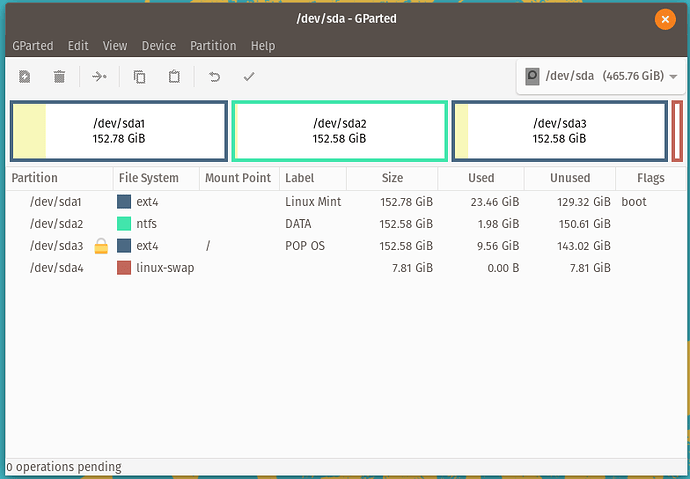 Pop OS and LM784×545 33.5 KB
Screenshot from Pop OS, notice the mount point, boot flag is still on LM. One could change the boot flag to /dev/sda3. The boot flag needs to be on the /dev or the OS one wishes to keep, if one wants to delete either OS. I will keep LM, so the boot flag will stay on /dev/sda1.
You would think grub would make this easy, but I find nothing is really easy with Linux, this is what I have learned through trial and error, when dual or even a triple boot. This drive has msdos partition table, so only four partitions can be used.
LM is already installed and grub has already been written to the mbr of /dev/sda. When I install Pop OS, I can either install grub to the /dev/sda mbr or to /dev/sda3 partition or I do not install grub again. If I had, I would have chosen /dev/sda3, because I do not want to overwrite the mbr.
I always run sudo update-grub from the OS that I have recently installed. If the OS does not find the other OS, it is usually because os-prober is not installed.
Grub will always find the most recent OS that has been installed. This can be changed either by using Grub Customizer or by editing the grub.cfg file. I usually just leave it alone and arrow up or down to the OS I wish to run.
1 Like
Akito May 8, 2020, 2:41pm #13

That’s a thing common for GRUB 1. It is always discouraged to manually edit config files for GRUB 2, because one can and should generate it with the appropriate commands.

4dandl4 this is probably enough to find my way forward. I’ll get to it when I can and report my results. I’m always glad to find a discussion that puts light on something I’m trying to do and others will want to know how this turns out.

That is why I would advise to leave it alone.

I can confirm that the 4dandl4 solution works perfectly.

I expected it would after I read through it the first time. There was no problem. Took about 3 minutes to restore the Grub menu I needed after installing Pop behind Lubuntu.

And that’s a wrap for the problem of dual booting Pop OS on an old BIOS machine.

Thanks for the post. This works well with Ubuntu or Debian based distros, things get a little more kinky when trying to use Fedora or Manjaro.