There was an eclipse of the moon visible in Australia tonight.
Can you use the curvature of the earths shadow, projected onto the moon, to work out the relative size of the earth and the moon?

I suppose you can- if you know the distance between the Earth and the Moon.
AND you assume Aton (the Sun) to be at an “infinite” distance away.
But then, if you knew these, you’d probably already know what you’re seeking.

Hi @aqk ,
I suppose the biggest problem would be that the earths shadow is projected onto the curved surface of the moon, not onto a flat surface.
So the apparent curvature of the shadow would not be exactly proportional to the earths curvature.

But you’re looking at the moon as a flat surface

You are looking at a shadow on a curved surface, then the whole thing projected onto a flat plane which is the focal plane of your viewing technology.
Too complex for me.
Yes nothing is a perfect sphere.

We had an Oblate priest once, from OMI, not from Mexico.

We need to find an easier maths issue. Not much discussion on this one. Any ideas?

I believe that you could. This is a scale drawing of the Sun, Earth and Moon with an extra Imaginary Sun close to the earth to give an idea of scale

That’s really handy the website allowed me to spend an hour creating a reply and then told me I was only allowed to post a single image as a new user when I tried to post.
Hopefully I can add further replies.

In the above picture the squares you can see easily are actually 4 million kilometres (not sure if you will be able to see the smaller squares).
This is the imaginary sun with the Earth and Moon over to the right, and, I’ve drawn a “plane” through the moon to project the shadow of the earth. 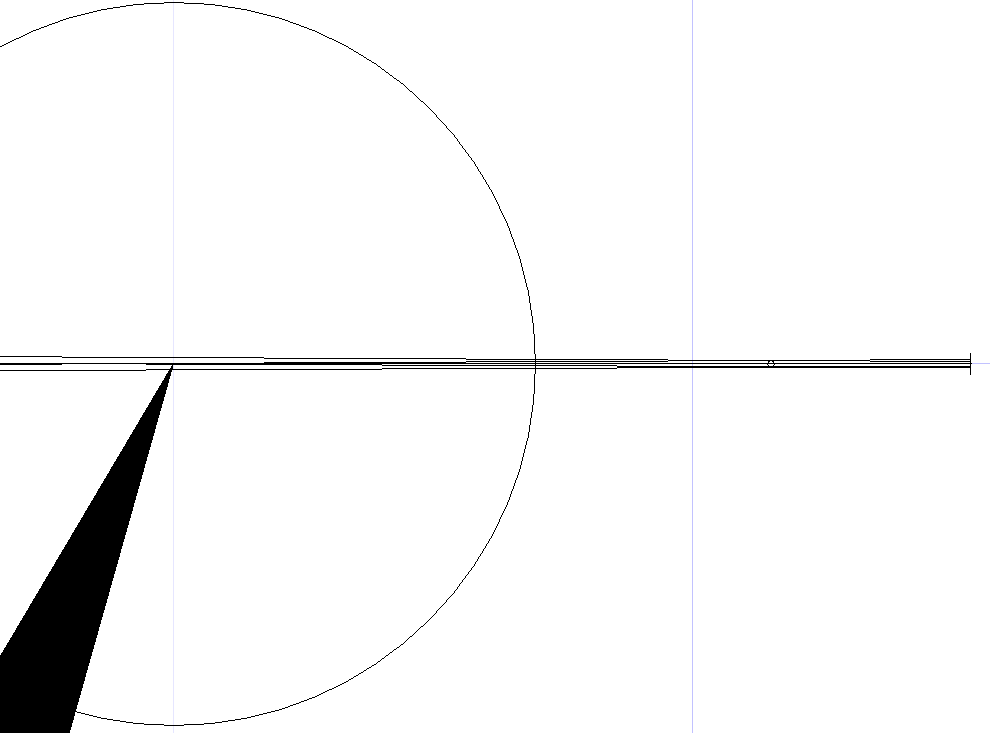 You may not be able to see the Earth and Moon.

Includes the Plane through the moon.

@Randall ,
Hi and Welcome,
I think I get it. You are trying to allow for the change in size of the earths shadow with distance

However rhat thinking fails to allow for the expansion of the shadow as it travels from the earth to the moon. Can you work out from your diagrams, how much the shadow expands?

I wish we could do Latex in FOSS replies. It would help,to write down a bit of algebra.

I was only allowed to post three replies before so this is the last part of my original post. 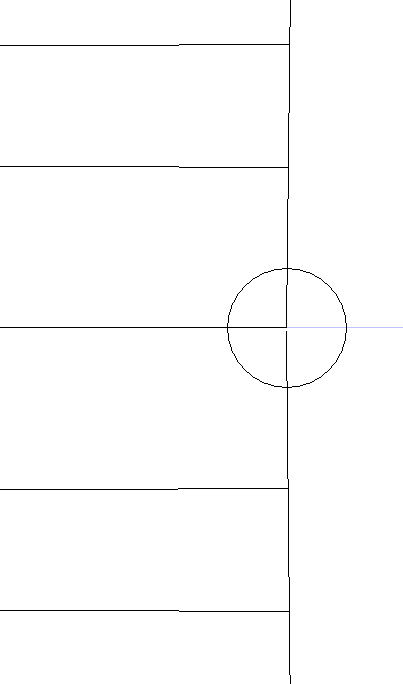 You’d need to analyse several images to measure the size of the umbra and penumbra circles relative to the moon, but, I think it could be done. (End of original post)

Don’t worry about the increase in the size of the Earth shadow from the Earth to the Moon: it’s negligible:

The distance sun-earth is around 400 times the distance sun-moon, so one can reasonably assume the sun is infinitely far away (depending on the precision desired). The fact that the surface of the moon is not flat does not affect significantly the calculations, as the diameter of the moon is small. So the shape of the shadow as we see it is virtually the same as if it were projected on a flat surface.
So, anyhow, at the precision that allows the shadow, with it’s blurred from the size of the source of light (the sun), the ratio of the earth and of the moon is the ratio of the radii of the shadow of the earth on the moon and of the moon itself…

They say infinity exist, I know that is a false statement.

e shape of the shadow as we see it is virtually the same as if it were projected on a flat surface.

I have just been tryong to,do exactly what you suggest, using a photo of the recent eclipse.
The shape of the earths shadow seems to increase its curvature towards the edge s of the moon, and be flatter in the centre.
I will post a photo so you can see.

Hello
I know it (infinity) exists .
Example
My mother-in-law memory_Ask Bob her hubby

I just put a period behind everyting it ended there… So infinity and beyond.

Foot squared x depth, divide by 324 tells us what? No google

The fact that the surface of the moon is not flat does not affect significantly the calculations, as the diameter of the moon is small. So the shape of the shadow as we see it is virtually the same as if it were projected on a flat surface 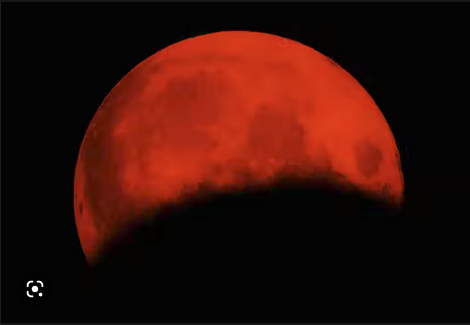 Lets see if we can get a couple of curves to measure.
I used Gimp and thresholded the image to obtain the following binary image 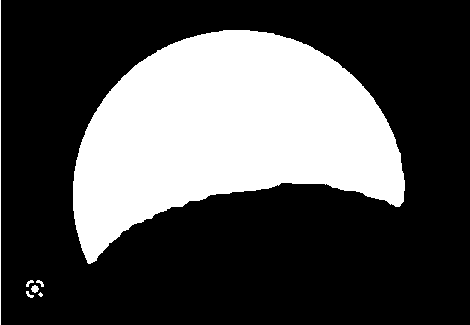 The edge of the earths shadow seems a fairly even curve - ie it does not change curvature toward the edges.
Now we use an edge detect filter to convert it to lines 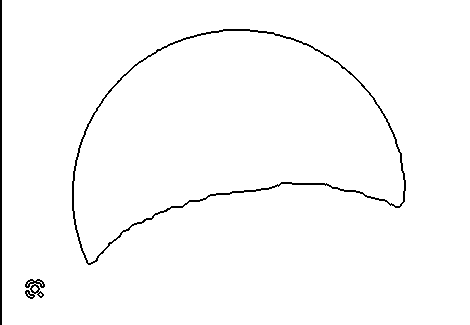 So now we have 2 curves that we can measure

Now the problem. Gimp will mot measure lengths of lines. It has a measure function but all it does is record coordinates of points.
So I printed the above line image and marked out my chord and perpendicular, and measured them with a ruler., as follows 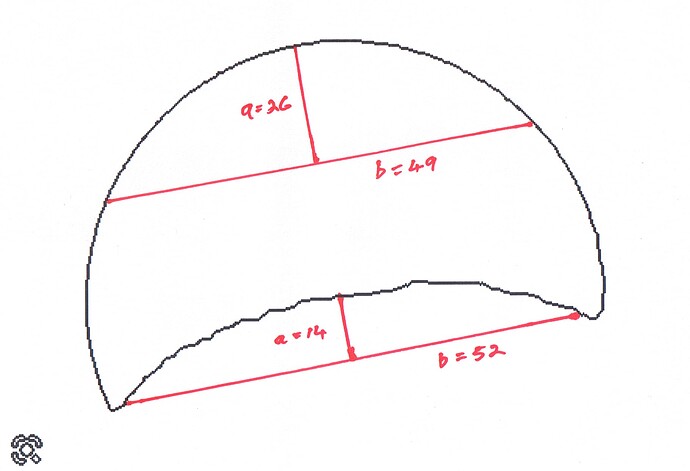 Hello @nevj
I tried the measure tool and maybe your way was different so posting my version if I’m wrong oops,

Measurements are taken from downloaded image completely different size but the method of measure is what I’m curious about.

So a series of tries and end result a bit on the rough side screenshot,
Was your way similar 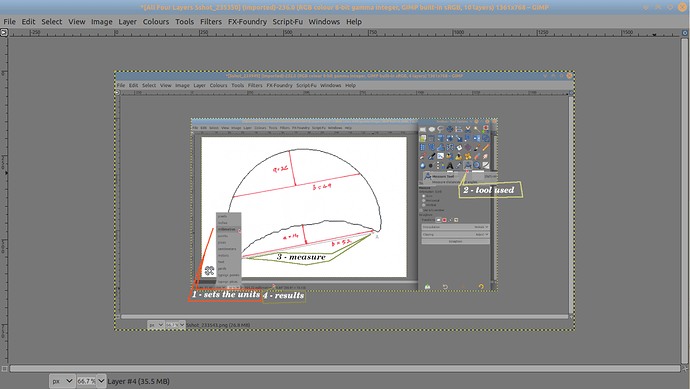 Take another look at my last picture: this time overlayed by a pixel ruler

Average of Penumbra and umbra = 586 pixels

That gives a ratio of Earth to Moon of 3.76, and, the actual ratio is 3.67 (well within the accuracy of that pixel measurement).