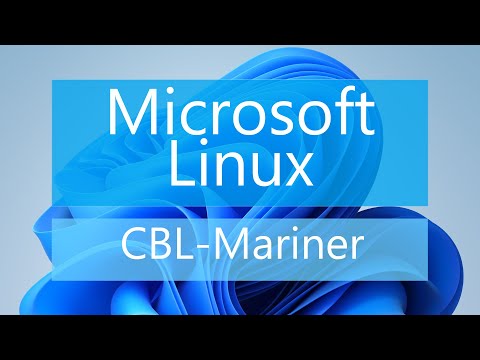 This is quite scary, but could be helpful too maybe?
I’m actually wondering and asking Why? Both at the same time.

The “build” process looks similar (maybe even copied from) to how you can roll your own “local” install of Amazon AMZN Linux to run on your own kit… Noticed they’re using DNF - so one must assume, like AMZN, they’re using RPM / YUM / DNF (i.e. they’re basing themselves on Red Hat)…

The only way I could expect this to work, is if Microsoft invests so many millions into developing it well, that it will be so extremely user-friendly, leading to the absolute destruction of Ubuntu. Everything below that would be absolutely useless and they would need to throw away the distribution or at least re-assign its development team to different projects.

Nobody will use this distribution, except it’s at least or even better than Ubuntu. It has to have something very special and noteworthy about it, to be even worth thinking about.

CBL-Mariner (Common Base Linux) is a free and open source cloud infrastructure operating system based on Linux and developed by Microsoft. It is used in Microsoft Azure and in the Windows Subsystem for Linux 2 to provide the ability of running Linux graphical user interface (GUI) apps on Windows 10. CBL-Mariner is being developed by the Linux Systems Group at Microsoft for its edge network services and as part of its cloud infrastructure. The company uses it as the base Linux for containers in t...

Question is does it have blue screen of death, loads of virus issues, need daily updates, and when does version 2 come out, will it run in 640k memory, still use floppy disks, and be a rip off of cpm, then follow Apple screens

Luckily you cannot download this as a ISO straight away, you have to make it yourself using make commands etc. I could not believe what I was seeing, thinking it was a late or very early April Fools Joke.
Like he said in the video, who knows what could happen in say five or so years? Why would they adopt such a thing? Microsoft loves Linux, to the point of destroying it.

I don’t see this that bad at all.
I think MS can not destroy Linux. Can you imagine, for example Debian people to quit using/contributing Debian because switch to Mariner?
I cannot…

But I can imagine, that one time Windows (say Windows 31.415926536) will be based on a Linux kernel, and Windows will be technically just a DE, like KDE, or GNOME.
That won’t mean destroying Linux, but the opposite.
Of course I may be wrong

Like he said in the video, who knows what could happen in say five or so years? Why would they adopt such a thing? Microsoft loves Linux, to the point of destroying it.

I don’t see this that bad at all.
I think MS can not destroy Linux. Can you imagine, for example Debian people to quit using/contributing Debian because switch to Mariner?
I cannot…

That won’t mean destroying Linux, but the opposite.

I probably have a different definition of “destroy”, than you guys.

A long time ago, Slackware was one of the most popular Linux distributions. That was before Ubuntu.

Ubuntu crushed pretty much every other distribution, after it became popular, including Slackware.
Mint, which is based on Ubuntu, was extremely popular for a short time, even more popular than Ubuntu. It is now still popular, but overall, Ubuntu wins the war, even if not does not and did not win every battle.

I assume – correct me if I’m wrong – that you think, Slackware isn’t “destroyed”, because it is still one of the oldest Linux distributions that are still used today! However, in my opinion, Slackware is absolutely destroyed. Why? Because there is like a 0.01% chance it will ever gain any significancy ever again. Literally nobody cares about Slackware today, anymore. Ubuntu rules the table and it will stay like that until something better comes along. To me, it does not matter if some tiny minority of old hackers still use Slackware. This is absolutely trifling.
The same thing may apply for any other distribution.
If – in a Linuxer’s worst dream – CBL might ever become more mainstream than Ubuntu, I would consider it being in the process of being “destroyed” because it would seem to me like after all this time Ubuntu losing its high point in the market would be close to destruction. (As mentioned above, it happened already with Mint, but since Mint is like Ubuntu’s brother, I do not count that as “destroying” Ubuntu.)
If Ubuntu would drop even remotely close to Slackware levels of popularity, then I would consider Ubuntu to be absolutely destroyed, never to resurrect again.
Yes, I am able to imagine that Ubuntu team members might even switch to the CBL development team at some point. Ubuntu people aren’t angels. They are just developers working for money, as most do. And there is nothing wrong with that.

What you describe, to me says it’s possible that a distro ruins another.
In your historical example Ubuntu destroyed Slackware.
Still, Linux was clearly not destroyed.
So if some time later, IF a MS Linux gains more popularity than Ubuntu, then Ubuntu may be destroyed.
Would that mean Linux being destroyed in general?
I don’t think so.
I can imagine a todays distro to vanish in a longer run, but I can’t imagine Linux to be destroyed in general.

Still, Linux was clearly not destroyed.
So if some time later, IF a MS Linux gains more popularity than Ubuntu, then Ubuntu may be destroyed.
Would that mean Linux being destroyed in general?
I don’t think so.

You’re correct. I wasn’t talking about Linux in general, I was talking about distributions.
For Linux to be destroyed, we need an entirely new OS from scratch, that is just as free as Linux, but developed way more professionally, ab initio, as well as with better tools. For example, using Rust.

I can imagine a todays distro to vanish in a longer run, but I can’t imagine Linux to be destroyed in general.

Digression
There won’t be any other new popular OS that is written in C/++, because those languages are gradually and slowly transitioning themselves into their own graves. It’s just going on so slowly for so many decades, that too many people do not even notice it’s happening. They all keep saying “oh, C++ is used all over the place” bla bla bla, without realisiing that the only reasons for using it today are only a couple ones that aren’t related to how well the language performs:

However, if you want a good language instead of C crap, you need to use something like Rust.

I probably have a different definition of “destroy”, than you guys.

What if MS suddenly move their Windows 11 over to EXT4 filing system? This is a thing I have been thinking about for years, because EXT4 has better journaling, with Windows on it you would not have to defrag your normal hard drive or trim your SSD. Now I don’t know if Microsoft’s Kernel is completely different to Linux’s or whether it would need rewriting to go on over to EXT4?? This would be a nightmare scenario though, simply because surely Linux would get attacked more and more, because using the same Filing System? Could this then lead to total destruction of Linux? Or would Linux have to find a different filing system altogether?

Could this then lead to total destruction of Linux?

would Linux have to find a different filing system altogether?

Still don’t see a way to grab Ext4 and turn it into a windows-only exclusively proprietary stuff.
There are already paid solutions for Windows to handle the Linux ext file systems, I know Paragon Extfs ExtFS for Windows | Paragon Software but there may be others too.

There are already paid solutions for Windows to handle the Linux ext file systems, I know Paragon Extfs ExtFS for Windows | Paragon Software but there may be others too.

Though, in my experience, these software are extremely lacking and like 80% of them are outdated and partially do not work, anymore.

I think it’s designed deliberately to “not be easy” - but you’re welcome to try it out… There’s actually builds of Windows server where there’s virtually NO userland stuff, just HyperV and powershell…

CBL’s designed to run on Azure - i.e. you can deploy it on Azure with “clickety-click-click-click” and you’re done - too easy. Alternatively - you might deploy all your Azure hosted rubbish using Infrastructure as Code build scripts - same again - if you know what you’re doing. Some IaC stuff by some experts is so sophisticated, once it’s bedded in, any moron can come along later and “clickety-click” and they’ve deployed an SQL Server, an Exchange mail server and 4 NGINX webservers with load balancing.

Similar to AMZN Linux - it’s a piece of cake to deploy an AMZN Linux instance on EC2, click, click, clickety-click - and you’ve got a remote Linux server you can login to over SSH and use yum or dnf to install whatever other packages you want to deploy… But if you want to take an AMZN Linux “ISO” and run it on your own “hybrid cloud” (i.e. VMware ESX) - it’s not so easy - it’s not rocket science, but, it’s not completely straightforward…

And let’s not forgot, Microsoft are no strangers to UNIX… They developed Xenix after all, which SCO licensed and it became SCO OpenServer, which various multi-national franchised fast food chains for DECADES ran their POS (point of sale, not piece of shit - but both terms are apt in this instance - e.g. pretty sure Pizza Hut was one) terminals on (often Wyse ANSI/ASCII terminals connected to Stallion RS232 paddle boards) - SCO OpenServer was ghastly, horrible, worst NIX I ever used…

And also - when Microsoft bought Hotmail, it was all sitting on BSD’s and they had to keep running it that way for years and years…

I read this and looked into it.
I think everyone misread this it’s nothing but is for cloud infrastructure nothing else Amazon was the same its aloa not a iso and not meant for general use.