My first Debian attempt - And a second one

Why is it not more simple.to install a distro that @Akito prefers ?

And that according to DISTROWATCH is 6th in the preferences

I am not enthusiastic about this.

Hi Roger,
It seems to be an on going problem with some Linux Distro and the internet. I remember a lot of posts about internet connection problems and Ubuntu. Number 4 on your list.
You could try doing a search here on Its Foss and/or a search on the web to see if there is an error like yours that may solve your PC problem.

I am currently testing MX Linux also a Debian base Linux. Two installs went fine. One on a laptop and the other a desktop. A third install on the same laptop on another SSD show I have a Wifi connection but the MX OS acts as if I am not connected. I plan to download the Distro again and re-install MX to see if that clears up my problem.
Good Luck.

When I do Debian (i.e. other than on RPi) - however - I usually find the drivers (deb files) and put them on yet another thumb drive so the installer can find them - but 'cause I’m so incredibly lazy - most times I can’t even be bothered to do that - so I’ll have the machine wired to ethernet during the installation, as most NIC / ethernet card drivers are free / OSS - just to get the beast online, pending locating wifi drivers…

Thank you @daniel.m.tripp and @easyt50

I was able to

My second question is about Firefox ESR.
Wow !! Is this version really stable and won’t be upgraded every 2 weeks ?

won’t be upgraded every 2 weeks ?

It gets updates too, but not so frequent. I think those are security updates, there are no new features or such.

I was able to add myself in the sudoers …

I chose MATE over Xfce or Cinnamon because I know MATE.

Why do versions make it so complicated ?

MATE in Mint is different than the MATE in Debian

It just looks so, believe me

Other aspect is to take your panel to the bottom, add advanced MATE menu, etc…
Have a nice time during customizing your Debian!

This is my Debian on my laptop, as you can see it actually is not so different from Mint, apart from theme: 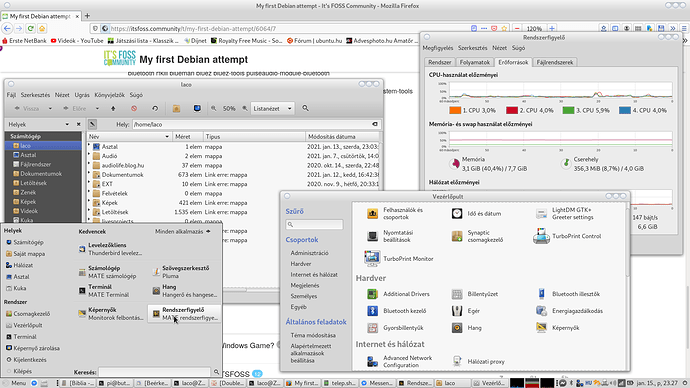 Thanks for your effort but my way is much faster.
Just delete Debian and replace it. 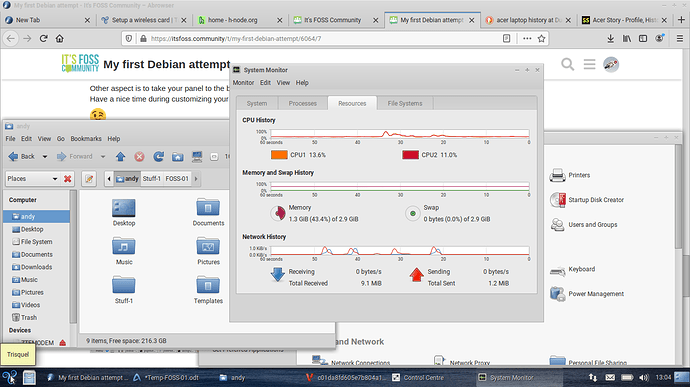 Looks like a dead ringer with my ancient laptop…

(Though only 1.3MiB RAM) Edit: and no use of Swap virtual memory either

Dead ringer
Your idiom is lost for me @Andy2 .

Sorry.
I am confused.

No - nothing to do with Covid or Black Plague; simply duckduckgo dead ringer and you get first up…

'A dead ringer' - the meaning and origin of this phrase

The meaning and origin of the phrase 'A dead ringer'.

Looks like a dead ringer with my ancient laptop…

is supposed to be a good thing or not?
I want the facts not an interpretation.
Thanks
And good Sunday to you @Andy2 too.

is supposed to be a good thing or not?
I want the facts not an interpretation.

Your idiom is lost for me @Andy2 .

Sorry.
I am confused.

You asked so I gave an answer and a link - how good is that?

I am the guy who tried to install debian on a DELL Latitude e4310, where I was asked to make the iwlwifi-6000-4.ucode file available while it refuses to see the file.

So the installation is made without network and after rebooting, I get a console/terminal.

Yet the Latitude d830 has a

I looked some places and all I can get are deb files.
I do not want to install packages I want the files :

But the stupid DEBIAN can’t even see the USB dongle TL-WN725N.

Thar stupid Debian needs non-free firmwares for that HW.
Either get an install medium with the nonfree blobs, or enable nonfree repo and install them.
I could provide you help doing this, but I’m afraid you already gave up with Debian.

Here are 13 distros I have tried.
I have listed them in order of preference.

The first four, I was never able to get the wifi working.

The other eight are ok and again in order of preference :

I would have liked to see what Debian looked like
but if I can’t install it easily ; I think it is is not worth the game.

Thanks anyway for your offer @kovacslt.

I admit I am used to PnP and I fully understand why so many people sneer at Linux users.

Before you send more of the smelly stuff on this board @Andy2
I must tell you that I have just sent money to ThinkPenguin.com
in order to get the Penguin Wireless N USB Adapter for GNU / Linux (TPE-N150USB) - $39.97 SKU: AR9271 (TPE-N150USB)

It better run on the first try
or
I’ll never talk to you again.
Promised.

Hi Roger, I still think you are a little confused as to where the first sample of the smelly stuff came from - I think it came from Akito’s outburst - excuse the pun -

on @Rosika topic for Advice on OS Quote:-

“but to me it seems like the average user wouldn’t give a single piece of flying pig shit, if their computer uses…” - "Trisquel will be the slowest in productivity… etc.”

That aside I am so pleased that you have at long last; like me with Trisquel, made a donation to the FsF by purchasing this USB-2 Wifi adapter. I am seeing $49.99 at the checkout - could you say if you think your price is expensive for such an item that makes so many claims. In my experience all gnulinux and FsF are both true and not subject to exaggeration.
However having said that - if you have read the extensive specification listings and therefore know what to expect regarding your requirements all should be good. 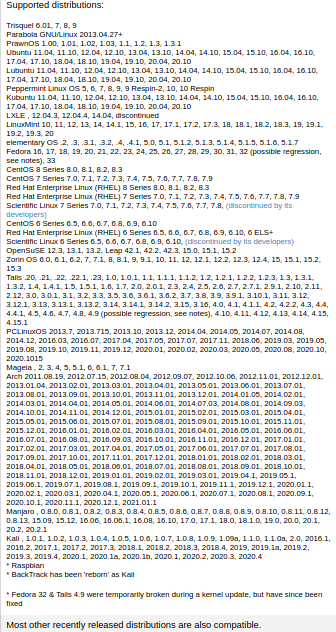 It better run on the first try

If we are wrong

and a shed load of humble pie.

I will of course fully reimburse you regarding any bad advice from me.
I can confirm that all my tests are genuine and not doctored in any way and their efficacy is backed up by independent experts like those at ubuntupit dot com. I take it for granted that your tests are of the same ilk. I wish you good luck and have fingers crossed.

Hey Dude, you may not get the pleasure

endorsed by two moderators, on my Trisquel Review post as I am being fitted-up there by entrapment. Guess the truth can hurt some and must be snuffed out at all cost by those in charge. Wish it was out in the open for all to see rather than this tacky underhand manner…

By the way - as you have tested so much across so many devices have you any idea as to why 32bit mini-Trisquel v8 is so light and fast on the 21 year old XP CAD station considering that it was home built and all…? If not who do I ask…?
I did another experiment on the LXDE Dell E6420 and juiced up mini-Trisquel v9 with popular heavy apps like full LibreOffice, GNU Image manipulation, Wine for my Serif MSoft professional software and more - it still runs fast and stable with no issues whatsoever and everything gets regular updates when I choose to. Still I need to bleachbit the drive or format it to try something else.

You think I am confused.

You think the smell came from someonw else.

You think too much.

Let other people do whatever they want to.

I asked for advices and got advices.

I tried Trisquel on 4 computers and said that it did not recognized the wifi cards nor the TL-WN725N and you jumped the gun.

I truly believe that you are not smart enough to judge what the moderators say on a board where you are ( and so am I ) just a visitor or a host.

It is a matter of respect.

People have their preferences but they are not into religion.

I know what FOSS is supposed to be.

Most of my relatives use Windows. A few are rich enough to buy an Apple product or they just do not know better.

I may have made a donation to the FsF by purchasing this USB-2 Wifi adapter but it is just to proove you wrong.

And Trisquel make me but a USB wifi dongle.

What I want is an OS that will work on all my machines. And I found some.

Your tests may be genuine but you have only tested YOUR Trisquel.

I think you can stop pointing shit face to moderators.

Do you understand why moderator ask you to act differently ?