OK - so - I’m pretty happy with the “new” (2020) MacBook Pro M1 my “new / old” employer (I worked for them up to April, they changed name, and I went back in September) issued me… As mentioned elsewhere, I kinda hate it when my work computer is better than my persona one…

(one thing I really hate about Apple is the exponential price increase to double your RAM or storage! But even so - when my boss approved my request for a Mac instead of Windows [there’s no Linux option - despite them being a large Europe based IT company] he told me the Mac option was the same price as the HP Windows 10 option) 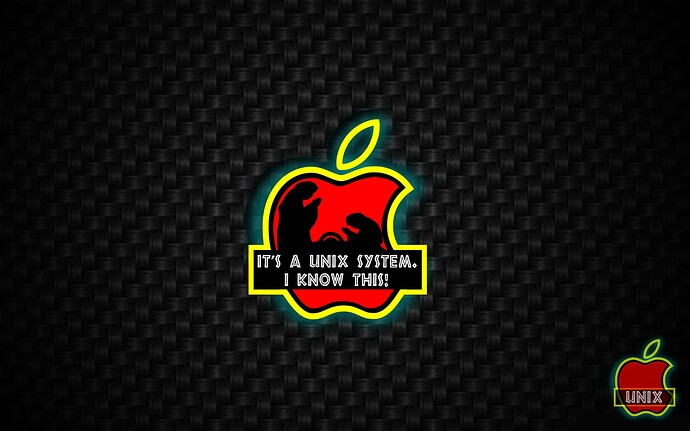 Wallpaper, and, meme… Jurassic Park (where the kid “hacker” re-enables the park security system using an OpenGL demo of a 3D UNIX / IRIX filesystem navigator), meets tyrannosaurs fighting over a table saw nativity meme, and Apple being a Unix vendor… 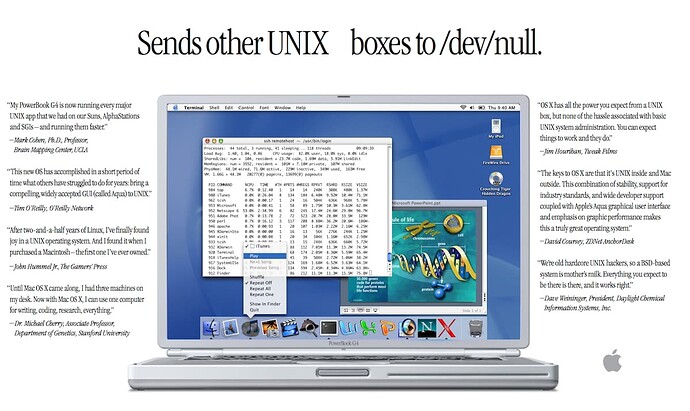 And - despite the limbo period of 2006-2020 where they ran UNIX on Intel, they’re now back on RISC architecture… 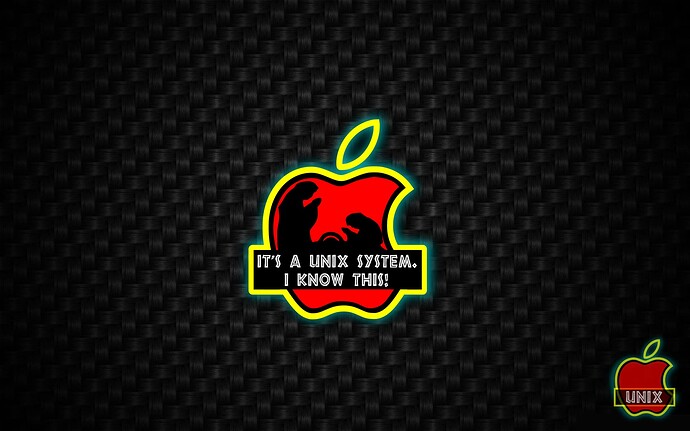 @daniel.m.tripp ,
Have you read Richard Dawkins “The Selfish Gene”
He coined the word ‘meme’

Yes - I think I have read every book Dawkins has written -

Well a meme is supposed to be something that aids transmission of some aspect of culture. Like a flag or a slogan. Much more subtle than advertising.

I guess your Unix/Apple wallpaper fits .

One of Neal Stephenson’s books “The Diamond Age” describes a world where the proletariat can’t read alphanumeric characters and words, they can only read in memes and emojis… and… I think we’re heading that way… maybe… there’s still be an intelligentsia of course… But it wouldn’t surprise me if in 100 years, “the great unwashed” can only communicate visually, in emoji…

Actually - my ambivalence is somewhat feigned - I KINDA HATE that idea - I recently got a keyboard (my daughters got it for me for my birthday this year [60th]) and it’s major selling point is the 5 or 6 customisable buttons down the right side - and it comes with extra “emoji” keycaps you can swap out - WTF? I don’t give a RAT’S ARSE about emoji - a smiley here and there is fine - maybe even a heart - but please please use LANGUAGE!

Anyway - thankfully that Logitech keyboard can be software configured, and I programmed the top 2 extra keys to be Copy-2-Clipboard (CMD+C) and Copy-out-Clipboard (CMD+V)… The closest MacOS comes to the X select buffer capability, is in it’s native terminal app (and what I replace it with - “iTerm2”).

SHITE! And its infecting (emoji SHITE) terminals - one “bragging” point that TermUX on android markets itself is some inbuilt EMOJI feature! WTF? WHY The Flying F–k would I want F–KING emojis in a f–king terminal ???

“The Diamond Age” describes a world where the proletariat can’t read alphanumeric characters and words, they can only read in memes and emojis… and… I think we’re heading that way… maybe…

Dystopic literature is fascinating. Replace 10000+ years of language development with a few graphic symbols and let all language go the way of Latin… what do you get? I think you get an evolutionary dead end. Communicate emotions but not thoughts. Gives me the horrors.

My favourite dystopic novel. R H Benson “Lord of the World” written in 1911

Looked up Stephenson… he isnt all dystopic. More science fiction with a math/technology bent

I went looking for the snap, flatpak appimage containers question
Answer… snap and flatpak are containers
but appimage is an image - ie like an iso file or a squashfs.
So appimage would not have the file access problems of the other two.

No-one seems to be considering just using a statically compiled binary instead of all these complicated so called solutions to the
package problem. A static binary would be portable within an architecture, and would be self contained and would have no trouble accessing files… What more would you want?

His most recent work about climate change was an excellent read “System Shock”… and a lot less speculative, than the similar “The Ministry for the Future” by Kim Stanley Robinson (who’s work I stopped reading because he wrote that gibbons had tails, and he didn’t even know [too lazy to do some research] that aurochs was just the wild ancestor of domestic cattle, and there’s aurochs DNA in milk and leather and steak and beef…

He (Stephenson) also wrote an interesting essay on the command line and UNIX. He was a Linux user until around 2000, when he got a MacBook with OSX…

I need to read Stephenson.
I rarely venture into modern stuff, but this sounds like my sort of thing.

On climate change, have you seen “Heaven + Earth” by Ian Plimer
My last modern excursion. It has been criticised for being a mining lobby.

No I haven’t but I might check it out…**

One of my “heroes”, Harry Butler, was constantly criticized for his involvement with big mining and heavy agriculture… being dogmatic about stuff is never productive… Harry Butler was down to earth, and, pragmatic, and I LOVED his series “Harry Butler In The Wild” - his relaxed easy manner was somewhat mesmerising and relaxing, as well as being informative… 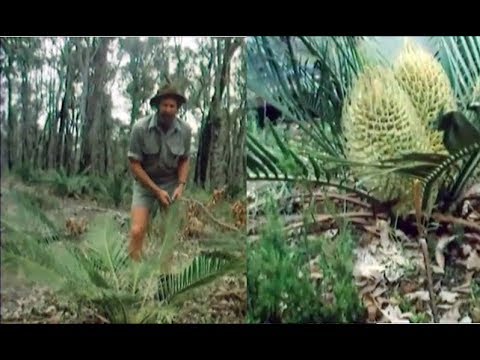 ** wouldn’t it be tragic if he was proven right, and we wasted all that effort to create renewable and clean energy

and stopped chugging our waste into the air, rivers and oceans?

** wouldn’t it be tragic if he was proven right, and we wasted all that effort to create renewable and clean energy

and stopped chugging our waste into the air, rivers and oceans?

I can feel that sentiment.
Was Harry Butler a physicist? I seem to remember someone at Sydney Uni who was like that.

Plimer is an Aussie. He was at Broken Hill when I was there. Never met him.

Was Harry Butler a physicist?

No - he was a naturalist, a West Australian naturalist… Also a TV presenter (natural history) and sometimes a celebrity - I remember seeing in on some debate with some hysterical PETA types, i.e. he was arguing from a rationalist / pragramtist POV, his adversaries crying hysterically… but I think that pre-dated PETA…

No - he was a naturalist

I was confusing him with Harry Messel
I remember the TV shows, both Messel and Butler.

Animal ethics invaded CSIRO somewhere in the 1980’s. Simple procedures like skin biopsy on sheep suddenly became major obsticles. Today one cant even publish a research paper unless it has an animal ethics declaration.