Oh no: According to Softpedia Debian less secure than Windows!

I guess I’ll have to switch everyone back to Windows again. Drat! 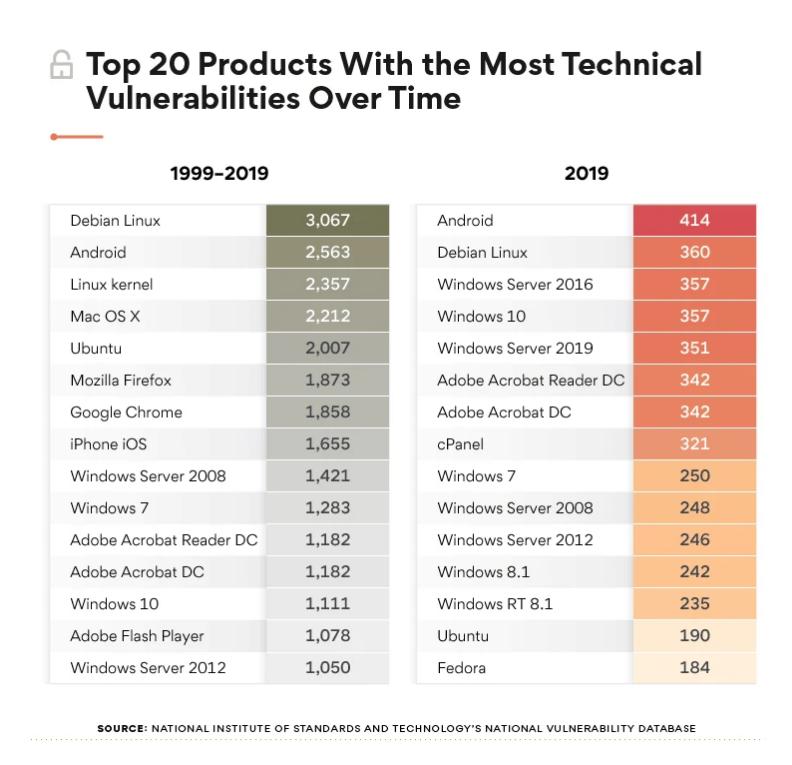 I stumbled across this article a few weeks ago. ( for the full article: https://news.softpedia.com/news/debian-linux-was-the-most-vulnerable-operating-system-in-the-last-20-years-529387.shtml )

I noticed a few–lets call them–errors in data gathering, categorical logic and the meanings of basic terms. But rather than being greedy and blurting them all out I thought we could all take turns!

However, Linux experienced the most reported vulnerabilities per product at 139.4, which is likely because the software company is relatively young and has fewer products.

What software company? To my knowledge Linux denotes the underlying kernel of the OS, or rather distro. And there are hundreds of them…

Well, well and Ubuntu scores better than any Microsoft OS in 2019.
Statistics can always tell what you like them to tell.
And what about the level of danger of these vulnerabilities?

Very superficial study. No real value in my opinion.

I’m no statistician, but I know when people are comparing bananas to bicycles.

To start, what exactly is a “technical vulnerability”? Is it an error in the source code that is discovered, logged, assessed and patched within weeks? Companies like Mozilla went open source in order to exploit “many eyes” bug reporting. They realized that no matter how good their coders were, groups of people tend to be bad at assessing their own work. Thus they uncover and report a very high percentage of “potential” problems; but they are problems that never really have a chance of being exploited.

With proprietary code things are different. Even if the very select group who maintain the NT kernel were absolutely honest and wanted to report all the vulnerabilities they found, would Microsoft’s marketing team let them?

So “technical vulnerabilities” in Window’s case usually means problems which have been discovered my users. These bugs are confirmed by actual hacks! (Notice there is no total for the NT kernel.)

The truth is no one outside Microsoft will ever know how many unreported problems the NT kernel has had. But why could ask “how quickly are they fixed?” As a Linux users we see a new kernel about once a month. With Windows 7, say, there were probably only a handful of kernel updates it it’s entire lifetime! So even if we treat these numbers as good, what’s the advantage of having fewer holes in your code if you seldom get around to patching them?

Clearly the National Institute of Standards and Technology is not up this task.

Good one! The writer clearly has no clue what Linux is. He draws no clear boundaries at all, so he can conclude absolutely nothing.

I had the misfortune of studying categorical logic in university, and it only works at all if you a very serious about definitions. But here the key issue–“technical vulnerability”–is never defined!

In fact there is no thought given to such any of basic issues. Why bring up the Linux kernel and then ignore the NT kernel? Are Android and Chrome OS to be put with Linux distros? And shouldn’t shouldn’t Acrobat be included in the Windows numbers!?

Finally we see numbers on Chrome and Firefox, but where are the numbers for Internet Explorer?

According to Churchill, I only believe in statistics that I doctored myself.

So, Softpedia said that TheBestVPN said that the National Institute of Standards and Technology’s National Vulnerability Database said that… … … I just love a good start on a story…

I was reading the article at Softpedia and I was like “What???”
Then I read your comments, and, if this isn’t the biggest forged news since (let’s say) 1999…

An where, in the statistics, are the vulnerabilities of Intel??? They’re behind any OS. Right?
The nerve of some people…