I had Windows 10 + 18.04 on the laptop. Something went wrong when I was using Gparted and I lost both OS. I reinstalled Windows 10 but Ubuntu and an NTFS partition were lost. Some Windows tools were able to recover them, but they need pro subscription. I even tried TestDisk which is also available for Ubuntu. It was too complex for me.

Is there any free tool which can recover partitions ? I am ok even if it is a Windows tool. While I like to have my Ubuntu partition back, I am happy if I can get the NTFS back. Thanks.

i used recuva a couple times in windows. it was usually just for a file or two that got accidentally deleted, but it has a decent gui to work with and has a free version.

Thanks. Recuva is what I tried first. But I am trying to recover partition as a whole. Recuva scans the whole disc and will give output as files. My whole folder structure is lost. While I might go to it as a last resort, is it possible to recover the partitions instead of files ?

For Windows, I have used EaseUS. It’s free to use (trial) for recovery of partitions and I had some success with it in the past.
It’s one of the best free partitioning s/w I’ve used for windows.

Did you install Windows first ? I know with Mint there are sometimes a problem if you try to install it first then Windows. There is something in the back of my mind that makes me think @abhishek did a tutorial on this on the It’s Foss site. I would have a look on there. Sorry can’t help much more as I haven’t used Windows for such a long time nor had to do a duel install on them.

Tried EaseUS. It displays the brought back partitions. But won’t recover them unless I get the pro version.

I recovered a lot of drives professionally, already. Often only testdisk was needed.

I am currently using it to recover. Sadly stuck on this part. Can you help please 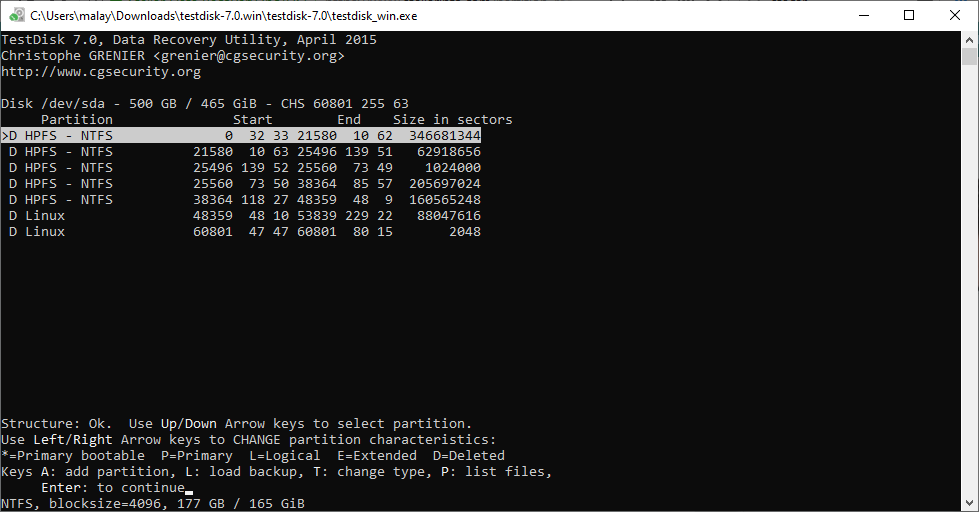 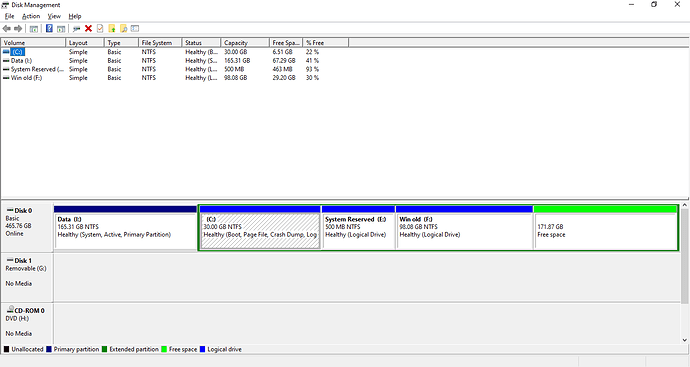 Whatever I enter, the structure ends up as bad.
I lost items and Ubuntu partition. Items is NTFS. Thanks.

Also attached screenshot of disk management of Windows 10 which is currently powering my laptop.

This where I am now. I don’t know how to proceed from here 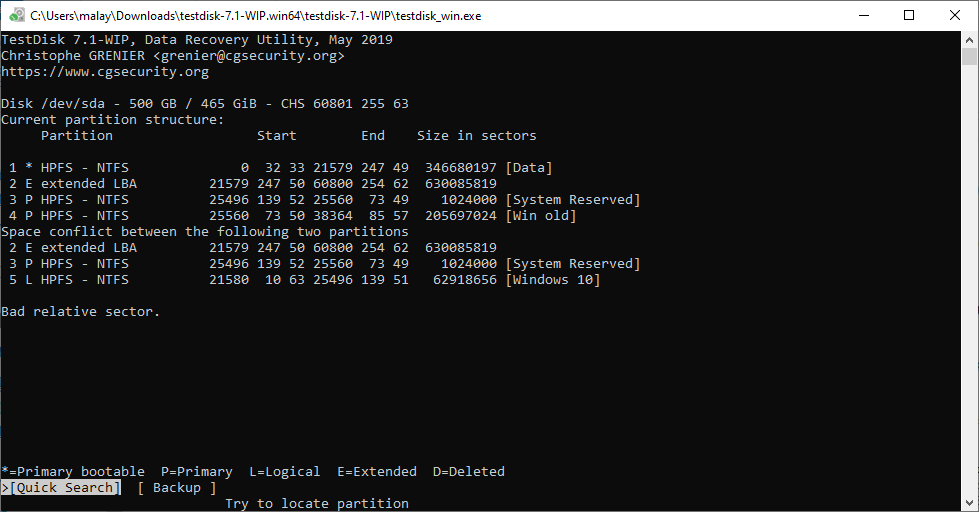 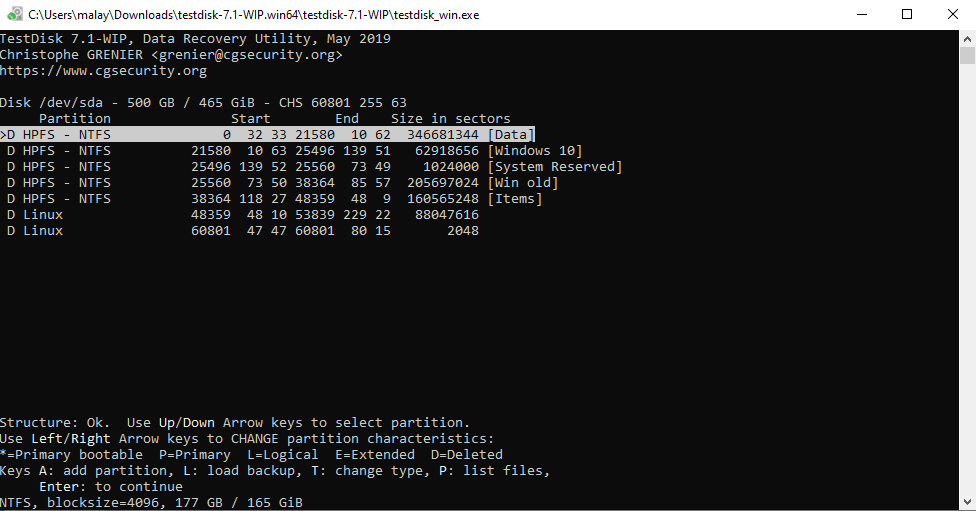 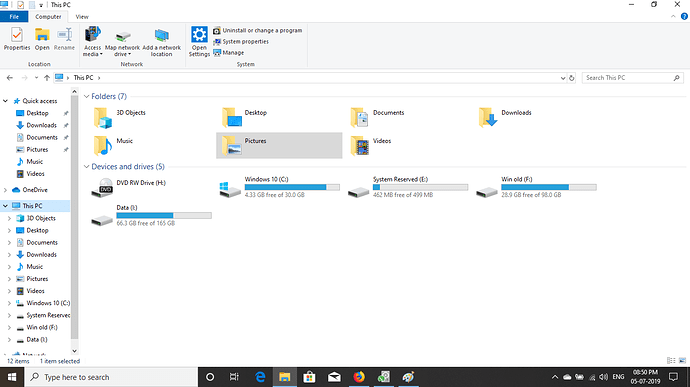 I need to recover items . If possible Linux ( Ubuntu 18.04 ) as well. There was also an Aomei recovery partition. But it is not needed anymore. @Akito

Well, first of all you are using an old testdisk version. Ah, actually while I am writing you changed to the newer version.
You need to know what the partition layout was before the deletion and then you need to make sure that you make 0 write operations to the disk. I can’t explain you the whole process of recovery though, as this would let the scope of this discussion explode. You kind of need to read books about it. It is possible to restore stuff without having that knowledge, but the risk of doing something wrong is by astronomical lengths higher.
How important is the stuff you are trying to recover?

How important is the stuff you are trying to recover?

There a few things I do not want to loose. Mostly home stuff.

This is what I have now. testdisk says Structure Ok. Is it ok if I press continue ? 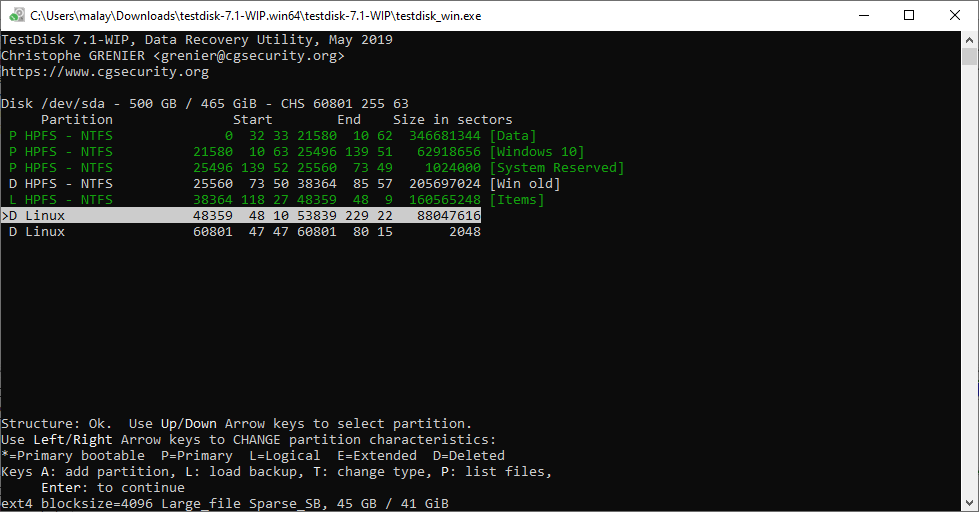 Is it ok if I press continue ?

Can’t tell remotely. The problem is, that if you do this one mistake and actually recover a certain incorrect partition, this process could theoretically delete files from the actual correct partition. So every wrong try of recovery may destroy data that could’ve been recovered on the next try.

I don’t want to answer which way you should go, as I cannot be sure just by looking at these screenshots, what should be done about the medium. I would need to investigate it myself. Usually I have the media given to me and I investigate them at home. So I rather refrain from giving you specific advice, as long as there is a risk of it being wrong, especially when talking about data recovery.

A couple of weeks ago I had a problem with one of my own drives and the recovery took weeks. Even though, because it was my private drive, I obviously put in much more time into it than I usually put into the drives of my customers, due to working hours regulations. That’s just an example so you can grasp the idea that a successful recovery isn’t just about pressing continue at 1 step of the process.

What if we use Primary for a logical drive ? Will it change to the one we set or loss of data ?