So I rebooted to the Grub menu, to recovery, dropped to a terminal and did the:

So now I could log-on to the install, but lo! A window popped up and said there was a mismatch with my keyring password, and asked me to enter it. So I entered the same password I originally set, and it was accepted. WTF? I can log on now, at will even, and the keyring window is no where to be seen. What evil will come up behind me and bite me in the ass?

Hi.
Just a shot into the blue…
Is it possible, that you had special characters in your pw, and the keyboard layout on startup is not that of your native language?
Had a similar case a time ago, when I set up a Linux Mint with encryption.
I set the pw with a german keyboard layout (Y <-> Z) and on the first bootup had a little problem until I realized the fault.
Just an idea…

it would not accept the password that I had WRITTEN DOWN!

Probably the keyboard is reset when you are not logged in. Sometimes it defaults to for example en_US and changes to your personal preference after login.

Try installing the distribution in a VirtualBox and copy paste the password. It should work then.

You changed your password, but not the keyring passwd.

Is it a coincident that I covered the Keyring topic this week? Explained! The Concept of Keyring in Ubuntu Linux

Repeatedly seeing "Enter password to unlock your login keyring" popup message in Ubuntu? It's not an error but a security feature. Learn more keyring in Ubuntu.

Please go through the explanation and let me know if you still have some questions.

I had same problem using French or English installs as keyboard was different but also discovered that if user name and password were the same it did not work, or if password was too short.
Sadly I have some clients who forget the password so have to make it really easy
Had one last week who came back 4 years after the install as he had forgotten the password he used everyday… No hope

You good people cleared that up! Specifically, I do remember using the keyboard layout to check out my Logitech wireless keyboard during the install. At first it wasn’t working until I plugged the receiver directly into the motherboard, not the usb hub(s).

Now to harmonize the Keyring and logon password! Thanks to all of you.

Akito, I currently am using Enpass for passwords, I’ll look at Keepass and check out the interface.

But - pretty much 100% of my customers use kdbx as password database format - some use something called PMP, and we (my company) started switching our customers over to a web service Thycotic - but that never really happened and us engineers just kept using KeepAss… I’ve got around 10 different KDBX files I have to manage (and remember to pull the latest version down from the customer’s storage platform).
I did actually try Lastpass for a few years, but that was cumbersome - and - I guess there are ways of doing it offline - but - I need a “one size fits all” solution…

So - I finally got fed up of KeepAss2 - why? Because the Linux port (it’s a Windows C++ application ported to Linux) doesn’t seem to “honour” X11 type things I’m so used to - mainly the X11 mouse buffer (I’ve unified both clipboard and x mouse buffer using ClipIt) - but approx. 75% of the time - when I select the “revealed” password - it never gets into the X11 mouse buffer, never mind the clipboard…

So I’ll be test driving that for a while : 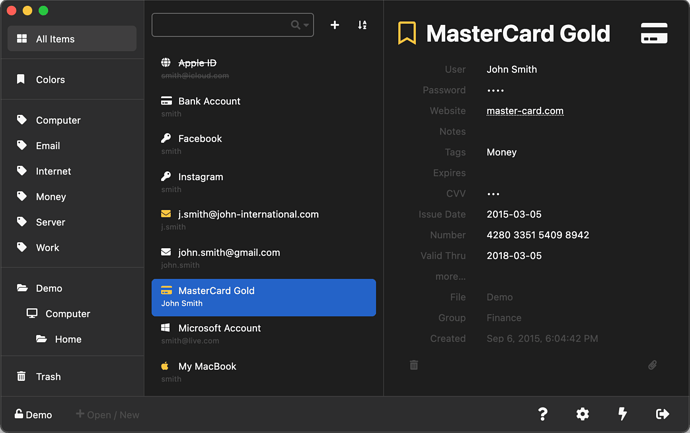 when I select the “revealed” password - it never gets into the X11 mouse buffer, never mind the clipboard

Works to my knowledge on Linux, as well.