Raspberry Pi inside a Keyboard

The reason why I was laughing and confused when I first got the news about this, is because they put a Raspberry Pi in a keyboard (which is actually a brilliant idea) that is just absolutely bad. It’s not ergonomic. Its keys are laptop-keyboard-like. I can already see, how this would break in 1 or 2 years of usage and how the hell are you going to replace that? Just buy the keyboard again and then transplant the Raspberry Pi? This is absolute non-sense.
If you gonna put a Raspberry Pi inside a keyboard and customize the keyboard just for this purpose alone, dramatically, then your first priority should be to make a great quality keyboard in the first place!
If the keyboard would be ergonomic and ultra high quality, like the Kinesis or Keyboardio keyboards, I would even pay 500 bucks for it.
But, the way it is now, I just find it ridiculous and, at least to people like me, who are keyboard-conscious PC power users, this is just a gadget to throw away your money.

I love Raspberry Pis, I have lot of them, but in my opinion, this project is an absolute joke.

I watched this product since the announcement, watched reviews about it and – most importantly – I watched the price. I was under the impression it would be MUCH more expensive, yet it has become quite cheap. Therefore, I must revert my previous harsh opinion about it, because I find the device actually pretty good for the price you pay.

It is a very nice beginner device for newbies to get into the Raspberry Pi world.

I too thought it was a great idea… but then resisted loading up my creditcard just to check it out. I saw somewhere that you could run the OS right off the MicroSD card. It would seem silly to have an external SSD with a gizmo like this. I was shocked at how cheap I found 1TB MicroSD cards on Amazon. I wouldn’t trust the reliability of any of the cheapos… but that got me thinking… are there any MicroSD cards out there that would be reliable enough to run the OS?

Honestly, I love the idea. Of course, this gadget isn’t supposed to replace a real computer. As @Akito pointed out, the keyboard is probably not so great for typing. However, let’s be honest, most notebooks have crappy keyboards and at least some people seem to like the Pi keyboards, as e.g. Chris from Explaining Computers points out in his always very charming way.

I could imagine that this is very nice to connect to a TV (e.g. for children) and perhaps to some external devices in the living room and it might also be a nice thing to carry to off-site meetings: much lighter than a laptop and more user-friendly than a phone.

But I say kudos to the foundation! I like the idea and I hope it pays off…

and I am not sitting on the fence. So Akito I love your forthright no nonsense annihilation of that yuk keyboard but suspect they needed to keep costs down hence we end up with something a little bit cheesy yet mostly functional to a point. Perhaps as you sought of imply, you could argue that there is a need for two models: One as is and another upmarket version with a pleasing ergonomic keyboard to cover all tastes and requirements making this Pi even more successful by appealing to a wider audience?
@Mina says quite rightly “this gadget isn’t supposed to replace a real computer” - for most people’s understanding of a real computer. However you say:

However, let’s be honest, most notebooks have crappy keyboards

Perhaps more modern laptops or notebooks are just hyped up cr4p judging by your comment. After all they put Win10 on them – Gah…! Yet as can be seen below my old HP G60 Notebook has the best full English breakfast keyboard – much better than my more modern Dell Latitude E6420 and its Yankee minimal keyboard! I am no way a power user but appreciate a fuller keyboard with a number pad - perhaps this stems from CAD and CAM where you punch in so many numbers to define dimensions etc.
Having said all that my great niece has this Pi and I can’t wait to find out just how she is going to put it to work for her – the real test for any device? 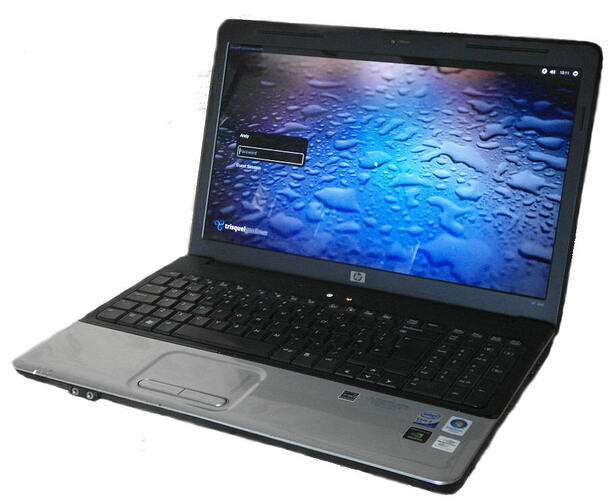 Mine is still in the box, as sorting out my study to run all of my computers and consoles in. It came following day and like I said it is still in the box. My very first computer Sinclair ZX81 was touch sensitive keyboard, used to scare ourselves silly with a game called monster maze. Got into basic programming plugged into a portable black and white TV, then years later I bought three Acorn Electrons the daughter of the BBC computer, which housed a very loud solid QWERTY keyboard. The reason why I had three, was because one had a word processor port on the back, for doing CV writing documents and the like.

The point I’m trying to make is to me it makes sense having a keyboard attached to the PI without having it weighed down as the normal PI would suddenly lift up, if you had a really heavy USB lead or HDMI lead plugged in. The other Acorn Electron I still have to this day, could play all the games available, where as the third one couldn’t but was great for basic programming. The Raspberry PI is a nostalgia tool, which you can program to do all sorts of things from robots to operating your entire home. It teaches us all about computing, plus the fact so many OSES available in the ARM format now, which is nice to see and yes you could just use it for emails, writing on forums, YouTube etc. With 4GB of ram in a computer still the size of a credit card, I’m glad they give you choice of just a plain PI or this one with the keyboard. Plus I’m proud to say it’s mad in the UK instead of China.

The Raspberry PI is a nostalgia tool, which you can program to do all sorts of things from robots to operating your entire home. It teaches us all about computing, plus the fact so many OSES available in the ARM format now, which is nice to see and yes you could just use it for emails, writing on forums, YouTube etc. With 4GB of ram in a computer still the size of a credit card, I’m glad they give you choice of just a plain PI or this one with the keyboard. Plus I’m proud to say it’s mad in the UK instead of China.

As I already emphasized earlier, I love Raspberry Pis: their concept, their execution – I think they are amazing.
I also am a very keyboard conscious PC user. I simply am not able to type on a 50 bucks keyboard any longer. It feels like typing on wobbly pudding.

However, I criticized that there was an official Raspi-in-a-Keyboard created and released to the public for quite a sum of money and despite that, the quality of the keyboard is in my opinion way too bad to make the whole thing worth the money or worth buying, if you want something seriously helpful. I don’t even need to touch the keyboard, because you already see how the buttons are made and how they are laptop like. Laptop keyboards are generally the worst keyboards that exist on the market.

That said, there will probably be many happy people buying this device and keep being happy. But these people also use laptops as their daily driver perhaps and I could not relate to such a lifestyle, at all, because I would be too powerless and inefficient.

computer still the size of a credit card

I’ve got a bunch of Pi’s (2 x Pi3 and 3 x Pi4, and now a Zero W - not sure what to use it for yet) - and that “size of a credit card” comparison irks me somewhat, sure the Pi Zero is that size, but none of the B models are… the only other ARM SBC I have used that is also actually the size of a credit card, is NTC’s CHIP (still got 10 of them around the place)…

I’d love to see something like the CHIP resurrected (because of the inbuilt power management LiPo battery circuit) but with more cores… or at least a Pi Zero with multiple cores… I could scrape by with 0.5 GB RAM, but need more cores these days…