Just read the Mint blog and it seems that 19.2 will be released by the end of this week, with upgrade paths from 19 & 19.1 also being announced at the same time. LDME will be released later.

I don’t know about how others feel about this, but I this is very good news

Looking forward to it. My Xubuntu and MATE installs were having a tough time addressing my HP Laserjet, but Mint sees it and wakes it from sleep just perfectly. Mint seems to be the most useful distro right now.

I must admit Bill I totally agree with you and 19.2 looks great now it has passed through beta, might still have some bugs at first, but not many I don’t think

Dandy, I just installed 19.2, and you’re probably right–looks real good and moves very quickly. In the tray at the right end of the panel, though, the usual speaker icon (volume control) has been replaced by a pair of sixteenth notes. Makes no sense, and I’ll eventually find a way to tweak it back to the speaker icon. All the peripherals were picked up instantly and work as well as ever.

I’ve been running 19.1 on one of my machines for several months now. I installed 19.2 Beta on the other lappy when it came out. It has been very stable (for me) and I like the tweaks. Unless you are running mission-critical software, I recommend the upgrade.

It must be monitor resolution, on my 1080p system those appear to be quarter notes: 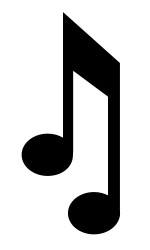 You’re right, of course, now that I think of that. Being musically dislexic, I’m a figure of ridicule in my family. Please be charitable.

Is that the beta version Bill? If so the full version is out now and you can upgrade to it. I have just don a clean install and it is working great

I’ve done all the updates available to the beta version and the System Information screen and Grub both say it’s 19.2, so I guess it’s upgraded. It’s running as smoothly as a Tesla. Hello wgberninghausen, my sound icon changes to a pair of notes or one note, when I am using Rythmbox, thats when I noticed it.

Ok, I have Rhythmbox installed, but I’ve never used it. Just for fun, I installed Clementine, a far superior program–and it’s playing now, hope you like Copland–but nothing changed the icon. Maybe there’s a Mint Tweaks program I haven’t found yet.