Remove Resolvconf is popping up

I was going to update the Xscreensaver, and saw this: 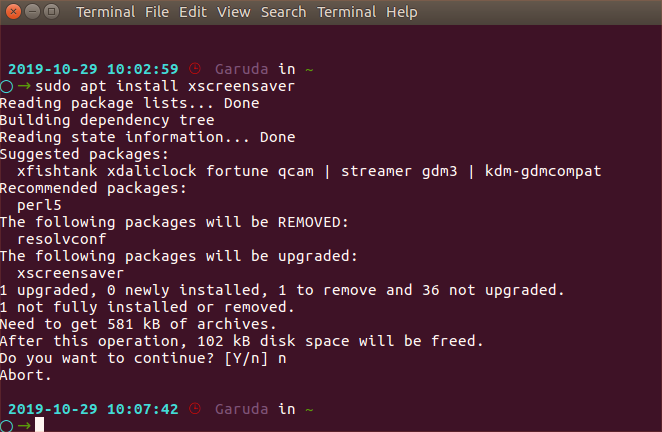 Why is resolvconf being removed? I saw this a few days ago on another possible update and said no: need more info! What is replacing it? And, when?

i don’t have an answer, but this is what i see from a quick search and a couple apt-cache shows.

resolvconf is still in the repo, but i noticed at the top:

is it possible you installed (maybe as a dependency?) openresolv at some point?

interestingly the dnscrypt-proxy (if this is the same system you installed that on the other day) package page lists resolvconf as a suggested install as well.

i think it might be helpful to run apt list openresolv to see if maybe that has something to do with it.

typing that last response out reminded me of reading through the Pacman/Rosetta the other day. down in the “Querying package lists” section it says deborphan -anpl will “list packages not required by any other package” so that might help you see if resolvconf is listed as a true orphan. in the next section down (Querying package dependencies) it lists dpkg -s or aptitude show to “list what the current package provides” and aptitude why to “list all packages that require a particular package”.

Looks like it’s a case of when an opportunity arises to move this along, resolvconf is deprecated. I would like to find out how this works: after installing and configuring dnscrypt-proxy, I don’t want to break it!

a fresh 16.04 virtual machine install lists python 2.x, 3.x and resolvconf even after an update. dnscrypt-proxy lists resolvconf as a suggested install instead of a dependency or recommended.

did you try apt list -a openresolv to see if you maybe have that installed instead?

So, I’ll investigate openresolv, since it is the likely successor. Thanks for the pointer, cordx.

apt-cache rdepends resolvconf lists just a few programs (dnsmasq and squid as well as openresolv itself) for which openresolv couldn’t act as a replacement for resolvconf.

one other place to look at whether or not removing resolvconf would be a problem is in synaptic package manager in the properties -> dependencies -> dependants tab. 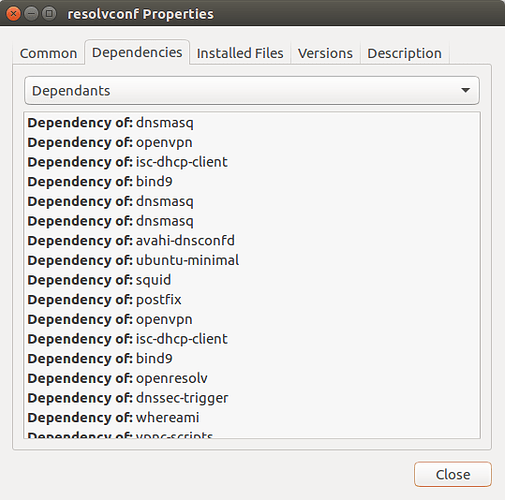 Screenshot from 2019-10-30 14-43-31.png540×534 44.8 KB
for perhaps an interesting comparison, bodhi 5.1 (based on ubuntu 18.04) has neither resolvconf or openresolv installed. i do, however, have postfix (which is listed as a dependant of resolvconf in 16.04 in the picture above) installed and listed among its dependencies is debconf so it looks like there may be more than just the two options.