I want to thank @Akito for getting me to look at this as he mentioned in a post about storage capacity which was beyond what I thought it was. Not that I doubted him at all, it was just I really thought they weren’t greater than 1 TB. At least that was the size I saw when I last purchased one. However, now I find that they go as far as 100 TB!!

By chance on twitter there was a link that led to a blog about How reliable are SSDs and some information about them and a full explanation about them and even the pricing of them in US $ . The link is here https://www.backblaze.com/blog/how-reliable-are-ssds/ and well worth the read as I have learnt a lot from it. My reading of this made me think there is no need for an HDD given the reliability of SSDs .

Again my thanks to @Akito without you putting what you did in the post (again sorry I can’t remember where) I would have not taken the time to discover this.

as (an apparent luddite

) someone who still runs hdd’s, one number that i have run into regarding ssd’s has been of particular interest to me. a couple of times on reddit i have read that there is some sort of rule of thumb that an ssd shouldn’t be filled to absolute capacity. something about there being issues if 10% (if i recall correctly. maybe more?) isn’t left empty? now that i am typing it, it seems to me @anon56357095 has mentioned it before.

obviously i could do a quick search and get some random internet take on it, but i thought i would ask here to see what people have encountered.

now that i am typing it, it seems to me @mack has mentioned it before.

It is known as over-provisioning, where you leave @ 10% of disk space left unformatted.

Essentially this is a Linux practice, M$ do not follow suit and install to the entire disk, and from what I can gather neither does Fruit. They use their version of the hijacked Unix code, they tried to patent and sued Unix. For copying them, go figure.

As with other file-system tweaks such as the scheduler, access time stamp, swap tendency and cache pressure values. Technical reasons I do not entirely comprehend, but appreciate how they speed up my SSD disks “read, write” ability, thus being faster than the older style HDD, with better heat dispersion.

UEFI technology is seen as Window’s attempt to restrict Linux aka secure boot, really expands the disk’s data capacity and 128 partitions and freeing up other restrictions of legacy.

I have read peer written articles suggesting the legacy BIOS is far from dead or obsolete. Chicken and egg comes to mind.

Once you have enjoyed the benefits of SSD and UEFI, the benefit of Legacy do pale, but can not be written off as they are still very useful, and do out weight UEFI in some respects, i.e multiple boot machines are far easier to maintain using legacy, as esp and grub can and will get corrupted.

Not all distros follow a common esp method and Red Hat favour 16bit esp partitions, whilst Debian are 32bit. They go hiss, when installed on the same machine, but can just about function together.

SSD maintenance has important daily tasks that can be done by cron job, the Ubuntu platform of distros are supported with trim being auto-run daily, this help prolong the SSD life, since 18.04.

Debian, Manjaro, Fedora, CentOS, ArcoLinux etc do not have run daily maybe set to run once a month.

Mint has it to run once a week, but you can change it to do so daily. This explains how https://easylinuxtipsproject.blogspot.com/p/ssd.html#ID8.2 and you only need to do it once as far as I know.

The below code is pre 18.04, how to change cron tasks from weekly to daily.

When I run the older code, then the manual trim, it suggested the code had worked, as there was OGb to trim. This is where made that assumption, thank you for correcting this oversight.

At the time I was acqaunting myself with Mints new desktop and the use of the xed admin:/// command, that replaced the gksu command, but reverted back to nano command as this my preferred method.

A noobie question:
Do we need to do SSD maintenance in all SSDs no mater year of fabrication?
And to windows10 is the same thing?
I ask this because someone told me we only need to trim earlier SSDs. The SSDs on line on the stores now don’t need maintenance.
We only make shure BIOS is selected to AHCI mode
Is it true?

Do we need to do SSD maintenance in all SSDs no mater year of fabrication?

And to windows10 is the same thing?

I ask this because someone told me we only need to trim earlier SSDs. The SSDs on line on the stores now don’t need maintenance.

We only make shure BIOS is selected to AHCI mode

Many thanks for your reply

See here for M$: https://www.custompcreview.com/articles/ultimate-ssd-optimization-guide-windows-10-update/ Unable to comment as I don’t use M$. Not a subject matter I’ve heard amongst M$ users.

Thanks for the link.
with information of the link you sent to me I already checked my OS and TRIM is running once a week

another question:
I bought an OCZ TL 100 on September 2017 and after 10 months the health decreases 10%
I asked to OCZ support if it’s normal and they said this problem was caused because my motherboard doesn’t have AHCI mode
I bought a motherboard an a OCZ TR240 to replace TL100 on June 2018 and now ,because, of TRIM doubt, I enter again in the OCZ program utility and saw the health of the new SSD is 91% - in 8 months decreases 9% of health

Does anyone have SSD OCZ TL100 or OCZ TL200 and have same problems?

Does anyone knows why health decreases?
I just use SSD to OS, programs and working folders are in HDD

I can not comment on the OCZ programme utility, as I’m not familiar with it nor used it.

In the repos have you tried to install the GSmartControl tool. I have just done so, usually rely on Disk Utility and Sensors, for drive and system temperatures. 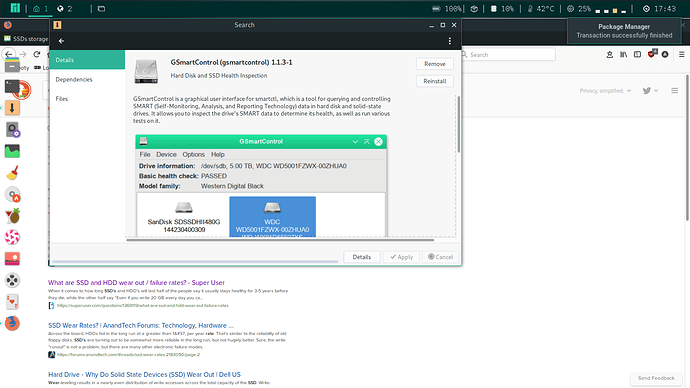 My Samsung 850 250GB SSD, this is my oldest SSD, I can say it is just over 4 years old and been used for multiple installs and had the trim and tweaks done for the last 3 years. But the first 12 months, it was abused by ignorance. No tweaks apart swap, no free space. 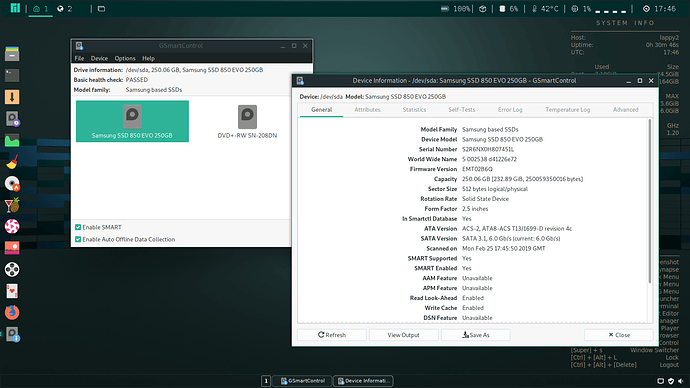 According to the smart tool, it has passed, looking through the other test categories, nothing jumped out to indicate failure was imminent or bad sectors.

Gnome Disk Utility informs me the disk is OK, 35C. Sensors are in the usual range.

Consensus of opinion an SSD disk should out last a latop, 5 to 10 years, life expectancy. This lappy 7 years old now, I rebuilt it 6 months after picking it up cheaply on eBay (had a few faults) to breathe life back into it. It now run 15C cooler since I replaced the HDD and use a laptop cooler. Plus openbox, helps.

HDD you can hear them failing, over time. Peer opinion is divided about SSD, between a quick failure or drawn out affair.

@anon56357095
thanks for the info!
I installed the GSmartControl and the SSD seems OK: 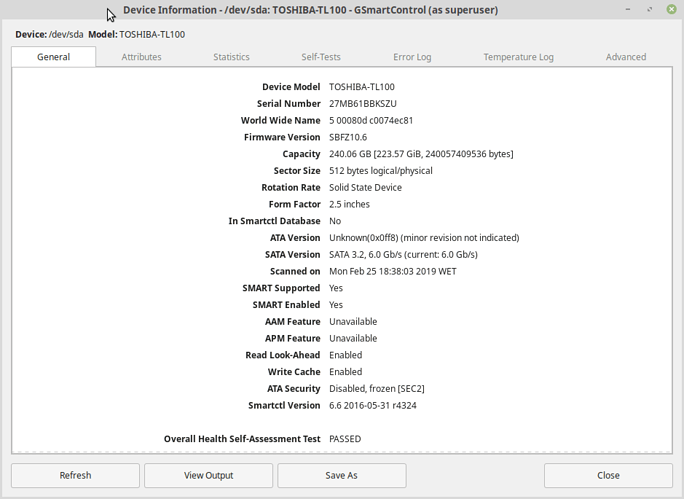 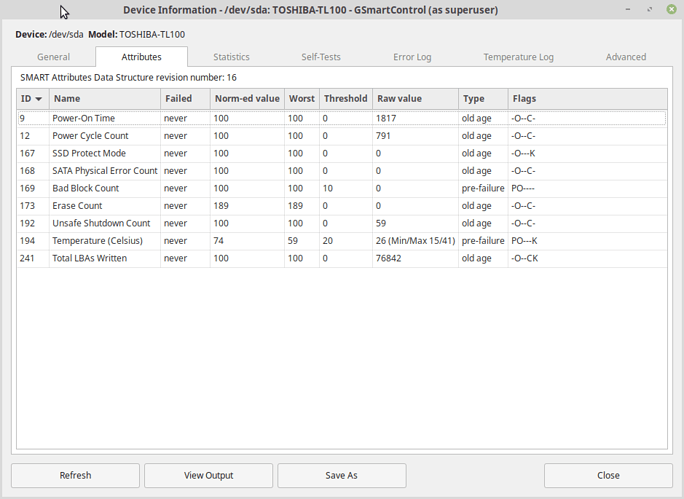 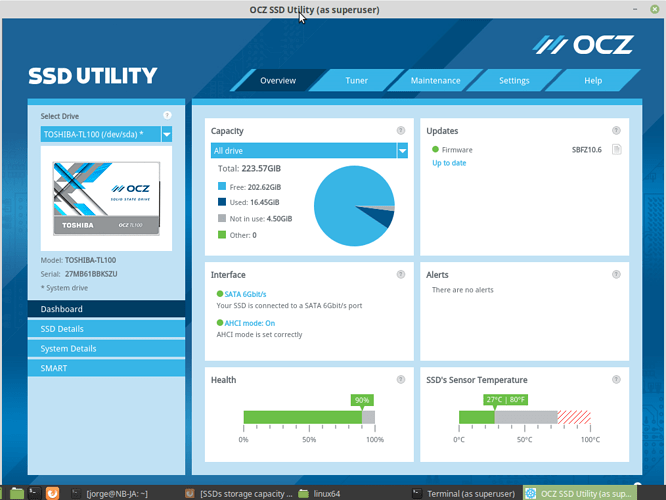 Now I will check TRIM with @ElectricDandySlider info for MINT

I don’t know about OCZ’s image, if they are rather producing cheap or expensive models.

About 4 years ago I bought a Transcend 128GB SSD and used it heavily since then. According to Crystal Disk Info the device’s health is at about 95% now. Transcend usually produces high quality products and usually costs significantly more than other comparable models.

1 Transcend 32GB SSD is more expensive than 1 SanDisk 120GB SSD, where I usually buy my stuff from.

summarizing and returning to the subject of the topic, the capacity of an 100 TB SSD will depends on the manufacturer’s brand - we can have a 100TB disk only for a few “months” with 100% health …

I bought a motherboard an a OCZ TR240 to replace TL100 on June 2018 and now ,because, of TRIM doubt, I enter again in the OCZ program utility and saw the health of the new SSD is 91% - in 8 months decreases 9% of health

Sorry to talk about this matter again

After a year, this SSD’s health decreases 15%, now with 85% and has only installed the OS (WIN10).
The programs and working folder are in a HDD.
The motherboard is configured to AHCI mode, the trim is enable and the page file is disable

I know this SSD works with WIN but my questions is in generic:

In your opinion, what could decrease SSD’s health in 15%/year?
Do I need to add additional over-provisioning? If yes, how much more?
Does anyone experience about SSDs and their durability, in Linux, for example: It’s normal health decreases so many in one year?

@Akito gave an example of Transcend

Does anyone have a good experience with other brands? which ones do you recommend?

I can only answer a part of this none of the ssds that I and my wife have been using for nearly 2 years now, have shown any decrease at all, they are both as fast as they were when I put them in. We only use Mint and when I set them up I used this guide as this was not something I knew about, https://easylinuxtipsproject.blogspot.com/p/ssd.html . I don’t know if this link will answer any of your questions, https://www.compuram.de/blog/en/the-life-span-of-a-ssd-how-long-does-it-last-and-what-can-be-done-to-take-care/
Sorry I can’t help further

Hi @ElectricDandySlider,
thanks for the reply.
I already did the tips of the guide https://easylinuxtipsproject.blogspot.com/p/ssd.html on my laptop with my former SSD but I haven’t used it since my last distro tests, so I still haven’t got any feedback, so if you have done all tips show n in the guide and you don’t have any problems with yours SSDs health, I will install Mint as well as I may have a chance to keep a healthy new SSD

I will read know the other link

No I tend to encrypt the whole drive during the install as I like it to be secure and not written to by mistake.

thank you for this also. i had seen most of these tips on a post here, but didn’t recall anything about ahci so that was helpful to check