Tarnished crowns of Lubuntu and Ubuntu

It is dysfunctional as the early offerings I had the misfortune to sample from other distros.

The QT base resembles KDE with its use of KDE components i.e K3b, Kcalc etc.

So its claim to continue as the lightweight champion has expired.

KDE own integrated tools such as their calendar, partitioning and a host of others have been steadily removed.

My peers with their (past) consensus of opinion deemed this poor practice, as it draws in a huge list of dependencies, thus cross polluting your system.

Currently testing Manjaro Gnome since mid October 2018 as my daily driver, and I’ve had to eat my own words. They have spent time, effort and a passion to present a fully functioning Gnome and Xfce desktops. As my customised Debian Cinnamon (Dell 7040 i7, did everything apart from gaming) has taken a back seat and collecting dust.

I have contributed (financially) to most distros I have used for more than a month. Manjaro, yep. 189 updates this morning and nought broke, peer opinions and rolling releases, hmmm…!

Lubuntu & Ubuntu, are they still pivotal players, but their current offerings will not encourage me to donate to their cause, again. They have a lot to sort out, and I’ve been waiting since 2014.

I’ve been curious as to how Manjaro handled updates. I used another Arch derivative a short while ago and made the mistake of not updating for more than a few weeks and when I did, the distro was beyond repair. I’ve never had that with a debian based distro but I’ve been wanting to try Manjaro. Thanks,

I had tried Manjaro on an old Dell (intel 2nd gen GPU) earlier in the year. Where I could quickly swap out the HDD for any OS I had installed onto them. More of a load test, minimal use, to gauge how it reacted, along with the other OS’es. There were zillions of updates each time I fired Manjaro up.

When I replaced my Haswell rig, with a Coffee Lake rig with 1060 Nvidia card, had the usual GPU & CPU teething issues, short version of long story. Manjaro, worked. The other rolling-release (w10) malfunctioned and died, soon after their 18.09 update (Bwhaaaaa…!). Manjaro has been purring along since without any complaints.

Please note, I had kept it updated on a regular basis. The 189 updates today, so soon after the annual upgrade from Manjaro 17 to 18, did give me a squeaky bum moment, as it indicated various warnings to upgrade Nvidia before mesa and other components. See screenshot.

Bear in mind, it seems to be a mind-set, between the developers of fixed 5yr LTS cycle and rolling-release, and “the twain shall never meet”. 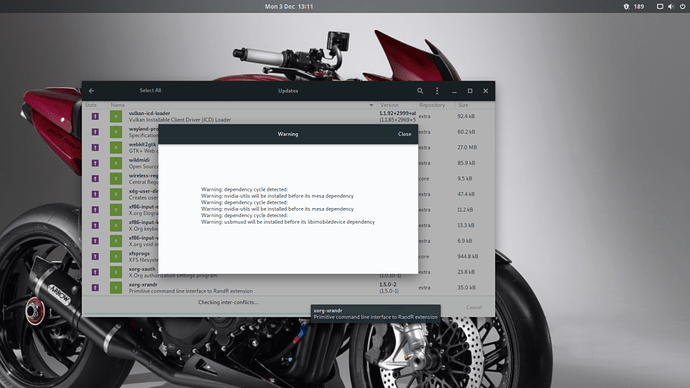 In your opinion, does the Microsoft ownership have anything to do with this? I’m still running 16.

Great info mack! Thanks for sharing.

In your opinion, does the Microsoft ownership have anything to do with this?

Please be specific. What do they own…?

Do you mean Manjaro 16. That would seem unlikely, unless you have not updated or connected to the internet since you installed it.

Manjaro 17, the version I installed updated itself to version 18 in November.

Well, LXQT is still in early development but in a couple(?) years it will supersede XFCE and LXDE as the most lightweight DEs. That said, I have a surprisingly balanced opinion on current Ubuntu, dispite my negative view on Ubuntu in general.

We have to keep up with time

Nowadays, I don’t understand many distribution developers (especially when they are making a derivative of an already existing base distro) when they are saying “Oh, look at that, we took the original distro and made it even slimmer! The installation image takes less than 1GB!” or when I read a bit of the LFS book saying e.g. “[…]They’re just sitting there taking up (precious) disk space. It’s not hard to get an LFS system installed under 100 MB.[…]”, because what is precious about disk space nowadays? It is the cheapest thing you can infinitely expand on your computer. A week ago I bought a SanDisk 120GB SSD for around ~$25. 2 years ago, I bought used HDDs, totaling in 20TB hard drive space for less than $50. I have a dedicated 128GB SSD for my Linux installations and it barely takes 1/4 of the SSD space, which means, that the rest is basically wasted at the moment.

(All this of course applies to desktop computers. When I have a Raspberry Pi that temporarily runs an old 8GB microSD, then of course disk/card space matters, I totally agree on this specific type of case.)

Additionally, certain distributions have certain targets. A dumb example for demonstration purposes: I won’t recommend opnSense to someone who wants to do office work on their PC. I also won’t recommend Puppy Linux or Damn Small Linux to someone with a high-end powerhouse. Therefore, I wouldn’t recommend Ubuntu to Linux power users like myself, either. Each distro has their own target audience. I can’t blame DSL for not having enough hardware support and all the programs I usually use on my Debian system. I also can’t blame Ubuntu for being bigger and hipster, because it is meant to be that way.

Therefore, I don’t mind a newer and in their view “better” Ubuntu taking up about 2GB of initial space, which is double the amount that competition usually offers. Even if it was 5 to 7 GB for something that usually takes about 1GB, I wouldn’t even mind, as long as the distribution is good.

Ubuntu is the Apple of Linux

Open source here, open source there, open source everywhere. It’s all the same, right? Not at all. I won’t go into detail regarding the different ways of how open source is handled through Licenses, because that would be too much. Let’s just say, that there is a lot of flexibility in the word open source once you choose the right License(s). What I want to point out though, is the following opinion: a product can never be a 100% open source when run by a company, because a company in our currently capitalistic world is physically and due to pure logic unable to have only (or mainly) typical open source goals in mind. It just doesn’t work that way.
So that already says a lot about how Canonical makes decisions regarding Ubuntu. To keep it short, I assume that this is obvious.

That said, Ubuntu obviously tries to push some “limits” and be hipster with some “unique” stuff they provide. I want to show my disagreement by putting those words into quotation marks. To name a few things, that should make it obvious:
Wayland, Unity, by principle based on cutting edge content, PPA. These are only the properties I could pull out of my head right now.
In my view Unity was one of the biggest failures, because it truly created a big Apple experience. When I tried it out, I couldn’t even change the position of the close|minimize|maximize buttons, because they were hard coded to be on the Mac side of the world.

Now combine my point about companies hosting open source projects and the hipsterness of Ubuntu and you can conclude how Ubuntu is supposed to work, what its view and vision more or less is and who it wants to appeal to.

Ubuntu is not the “worst” or something like that but definitely has many issues. Is that by itself bad? No, still not, everything has issues. The thing about Ubuntu though: it is considered one of the top distributions. At some point in history it definitely was. Now not anymore. The hype is especially gone in between people who have a lot to do with Linux from day to day and people that work with such systems, anyway. Yet, Linux magazines etc. talk about this distro all the time. Ubuntu has set its milestone and lives through the present by emphasizing the ghost of what it once was and trying to keep it in the minds of people. E.g. by doing all the hipster stuff. (Similarly to Windows, since it is garbage right now but of course everyone uses it, because it made a huge point more than a decade ago with XP and when it came out in the 90s).

Basically, if you are a hipster Windows kiddo, trying to do your thing then probably Ubuntu is one of the best alternatives you can get if you don’t have the money for an extremely overpriced Personal Computer a.k.a. Apple product.

I was referring to your comments on Ubuntu. I have not upgraded to 18 because of the bloating issues reported elsewhere. Microsoft bought Canonical who owns Ubuntu. I was concerned that when Microsoft bought Canonical that the Linux would become bloated. I had not kept up with Ubuntu because my original install was mostly to learn Linux and I had no desire to have the latest and greatest. However, since Ubuntu is now not technically Linux, I’m not sure my question has any validity. I installed Ubuntu Linux 16 on an old machine and it is still running fine. My next install will be a different flavor of Linux. At this point its a non-issue so forget my question: it doesn’t matter.

I was referring to your comments on Ubuntu.

My thoughts about Ubuntu, is frustration thats built up since march 2014.

Here is what I’ve found on the net.

​Microsoft and Canonical partner to bring Ubuntu to Windows 10 | ZDNet

You'll soon be able to run Ubuntu on Windows 10. It appears that Canonical have a form of partnership, probably in the same vain as openSUSE’s deal some years ago.

M$ bought github recently, but has nothing to do with git. So I’m informed by the greater Linux community.

All opinions are valid

I agree, the 16.04 Ubuntu base used by other vendors did seem to be of a better quality.

Well, LXQT is still in early development but in a couple(?) years it will supersede XFCE and LXDE as the most lightweight DEs. That said, I have a surprisingly balanced opinion on current Ubuntu, dispite my negative view on Ubuntu in general.

I’m aware its Lubuntu’s opening gambit. I saw no real improvements, from the concept iso I’ve tried two to three years ago and those inbetween.

Lubuntu is preceived as the premium Lightweight distro. But their 1.7Gb iso and use of heavy weight tools like K3b suggest Cruiser-weight asipirations.

The overall design is KDE’esque and retained that early LXDE windows 95 feel.

The LXqt jury is out, currently not impressed.