Hello all, simple question, but I have become a little confused, lots of information, but still not sure. Can I just plug in a usb to my laptop and then copy all the files across to the usb, I would start with Home, Desktop, Recent, then Documents, music, Pictures, Videos, and Downloads, and then just copy back on to another new Linux Mint distro? on a new hard drive, Why aren’t I able to do this? just cut and past, all the information and videos it seems to go okay but not for me. They end up all over the place, what is the standard way of doing this. Thank you all in advance

are you trying to copy just personal files like documents, pictures, music and videos or get everything including hidden and configuration files?

They end up all over the place

mean? they end up in the wrong directory or some of them don’t copy? can you explain a little more what you feel is going wrong?

Hello cordx, yes I think reading your answer, I may have made a mistake a couple of times or more actually, and always made a mess of it. So I guess personal files would be as you said above, documents pictures videos music, which is really all i want because i have all files in these places, I down load a lot of web sites to keep they in documents and downloads. I dont think i even need to have hidden or configuration files. I am thinking what I have been doing is copying Home and ever thing in home directory? or file? any way when I put it on new hard drive that must be whats happening, because there is already a home with all the configuration files ? insn’t there, there is no need to copy the home file directory i guess the home would be called directory. every thing i ever need is in Documents pictures videos music like in documents I have lots of files from internet. I once tried to copy a program called calibre, i love it, i had lots of books in that program and lost the lot, so never knew what I did wrong. it 1 am in morning here Mon Morning Jan 6th Internet is marvelous isn’t it.

Also when I say they all mixed up, it must be I have every thing in the home part and thats already got doc pic mus vid an all that in them, so would I just copy home file cut and past and it all woud be there would it not?

i think i am beginning to understand, but just want to make sure. when you say

I am thinking what I have been doing is copying Home and ever thing in home directory?

how are you copying your home directory? are you using the file manager (nemo) like in the picture below? 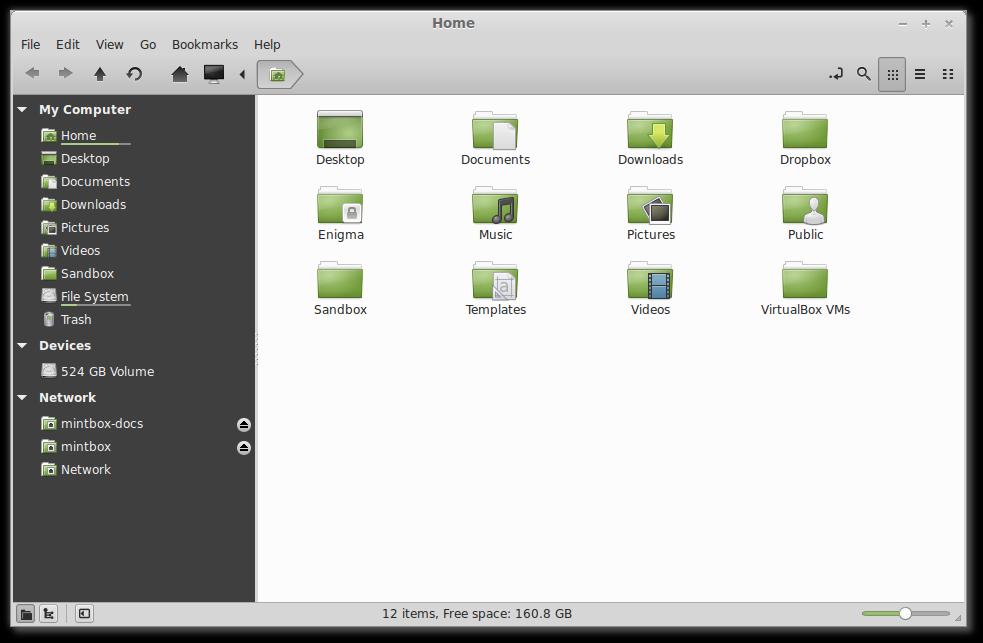 if you are using nemo, can you explain what you are doing to copy the files?

Lennox, when I prepare to do a clean install, I duplicate the Home folder to my external drive (or to a usb, as you do). When the clean install is finished, I use whatever file manager I have to display the new Home folder in one window and the duplicated Home folder in another window. Then, I open each folder and transfer the old contents into the new one–drag and drop works pretty easily. Just highlight the content only in the preserved folder and drop it in the (empty) new folder. Works every time.

Hi cordx one with hidden files and the other without 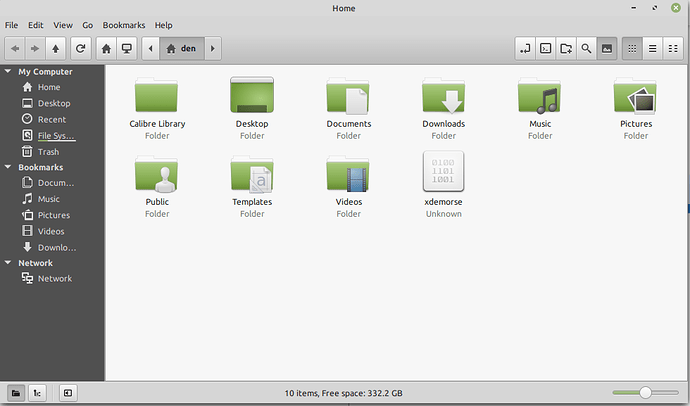 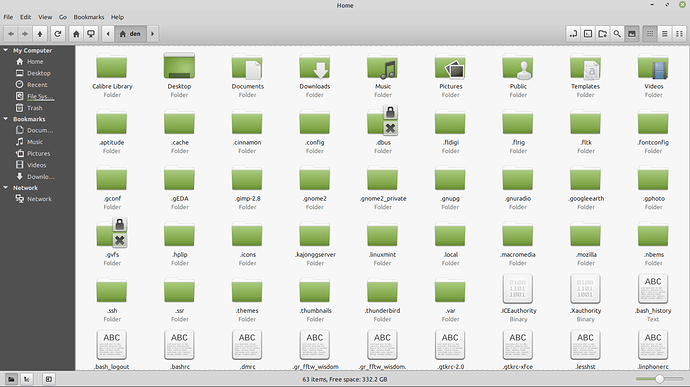 Hello wgberninghausen yes I have done something like this, I never know what file manager I have, its is supposed to be nemo i think there is also a samba? from memory, and needs to download files off the internet, not sure what that is all about either, I normally close the samba window, and I am still able to cut and past, dragging and dropping works okay but have to be careful. I am trying to find out what I am doing wrong, i seem to get files all over the place, as in I will end up with individual pictures in documents or music, stuff like that, and I am careful so not sure exactly what I am doing.
Do you know, cordex and wgbernighausen that in the 5 or 6 years I have been using Linux Mint, I have never once seen any one else laptop or Desk top with with Linux Mint on it, I know of no one that has a Linux Mint OS on any device in this area. So I have never sat beside any one who has used Linux Mint, I have been learning from YouTube and lots of forums and websites, and as there is a ton of stuff there it takes many many hours of reading and trying, It is only recently I have been on this site, and it is one of the best group of people I have learnt from, every one has so much patience. I follow It’s Foss on Facebook and sort of stick to It’s Foss mostly now, it seems to be set out better for learning people. For a slow learner like me It is making inroads into my understanding of Linux Mint, I know you would not think so by some of the questions I ask, lol. Thank you both for replying.

The simplest thing I can tell you is to use the file manager (Nemo, Samba is the network manager) to open both the saved file (let’s say Pictures) and the new file. Then highlight the picture files (use Ctrl-
A) and drag the marked files into the new folder. Then open another, maybe Documents, and move those files. If you only move the files, not folders, you will stay out of trouble.

And welcome to the gang!

i agree with @wgberninghausen that probably the easiest way to keep things straight is to copy all of the files you want from (for example) your computer’s Pictures directory in one window to a separate directory named Pictures (or whatever you want to name it. i named mine pictures to keep them distinct and separate) in another window like this: 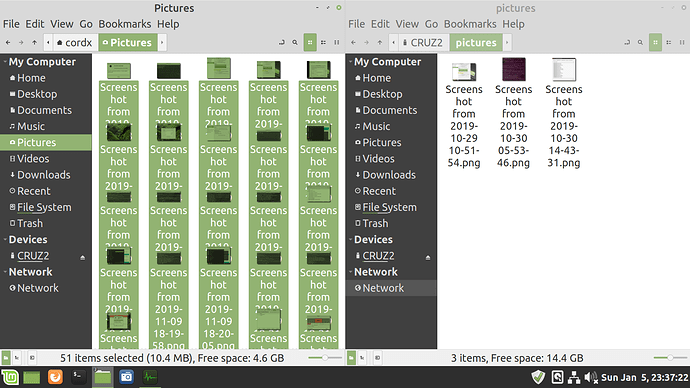 then when you want to transfer the files to the new mint distro, you can set up the same two window display to make the transfer just as easy. again agreeing with wgberninghausen, opening each directory and moving it’s files can help to reduce the risk of having files go where you don’t want them if you try copying and pasting entire directories.

Hope you are sorted out on this one, I found the split screen of Dolphin file manager just right for doing this. You can see what is happening, and check it out as you go

I see, so the upper case Pictures to lower case pictures, a file on the usb called pictures,?? then when copying back to the new linux mint, the lower case pictures from usb,goes to the upper case Pictures on the new directory???
I am thinking this may be exactly what is happening…"if you try to paste a directory named (Pictures) from a usb into your home directory where there is already a directory named (Pictures) that can cause some of the confusion you are getting i believe? I have cut and pasted for a hard drive to usb the whole home file just cut and paste the home file, sometimes problems, then I have cut and past all the, Doc, Pic, Dow, Mus, Vid, Pub etc, then putting on the new hard drive with new OS there are a lot of windows coming up where I have to skip files or wont go across, all these problems, sound familiar ??? Thanks you good people.

Linux Mint has a built in backup / restore process for Home. Why not use that?
Go to ‘Administration’ then ‘Backup Tool’. Follow the instructions and you end up having a backup file of all the files in Home (except folder ‘Backup’) placed in your Home folder at ‘Documents / Backups’.

You now have one file to copy to a USB or external drive with all your files form Home.

At the receiving PC, copy the backup file to ‘Documents / Backups’ under Home.
Again, go to ‘Administration’ then ‘Backup Tool’. Follow the instructions for ‘Restore’ and bingo,
You have just restored all the files from one Home to another.

then putting on the new hard drive with new OS there are a lot of windows coming up where I have to skip files or wont go across, all these problems, sound familiar

it might help to think of it like having a car in a one-car garage. you can replace the stuff in the car, but you can’t just drive the new car into the garage and displace the old one.

when i named the album pictures with a small p on my usb, it was to help illustrate the point that i created a new directory instead of copying and pasting the old one as well as to show that copying the contents of a directory is a little more straightforward for what you want to do than trying to copy the entire directory itself

Goodness, I did not know that, thanks easyt50, how silly of me, I seen it of course. many times, but thought, whats the point of backing up files to the same hard drive if it’s going to fail ? I could never find a way to use this back up straight to another hard drive, cant see the trees for the Forrest, so there you go, how ignorant of me. Its pretty incredibly how many eBooks I have on using Linux Mint and yet, I miss so much, its these little points I miss, and also I am sure so much is skipped over thinking the user has grown up with computers. In the last 15 years or so, I have been learning Math, for electronics, what I found was, before I could even began to understand Math, I had to learn the Jargon and terminology, that is the start long before I got to actually trying to understand Math, I have found this to be a major setback to learning anything, you really have to know all the jargon and terminology, I also learnt, I had to learn to learn again, lol So it is with computers so much Jargon and terminology to understand, and so many ways to do one thing, and some times some of the ways will not work on your system, though it works on some one else’s quite well. so much to read, so much to learn, so little time, big laugh, thank you kindly.

Thank you 0bill0, split screen of Dolphin file manager, I will look it up, thanks for the information.

Thank you cordx, you have hit the nail on the head, all the answers here have been extremely help full and understood, bit by bit.
Okay now I have to learn the, Consider replying to several posts at once, just got the request up on side bar. Next time, thanks to all.2020-01-06T14:00:00Z