Ubuntu is visible in UEFi after uninstallation

Hey, I recently installed Ubuntu on my UEFI system as a dual boot with windows following this tutorial: Beginners Guide To Install Windows 10 With Ubuntu in Dual Boot

Now, to be a bit more clear even though the install alongside option came I chose the manual partitioning just so I can have swap and a separate home partition. And for the sake of information, I installed Ubuntu 18.04

Then after using Ubuntu a bit I thought of switching to any other distro and deleted Ubuntu from dual boot following this: How to Uninstall Ubuntu from Windows Dual Boot Safely

Now what I created this topic is to ask that even tho I removed Ubuntu and everything is working fine I’m still seeing Ubuntu in my UEFI Boot sequence option in the BIOS as in the picture below. 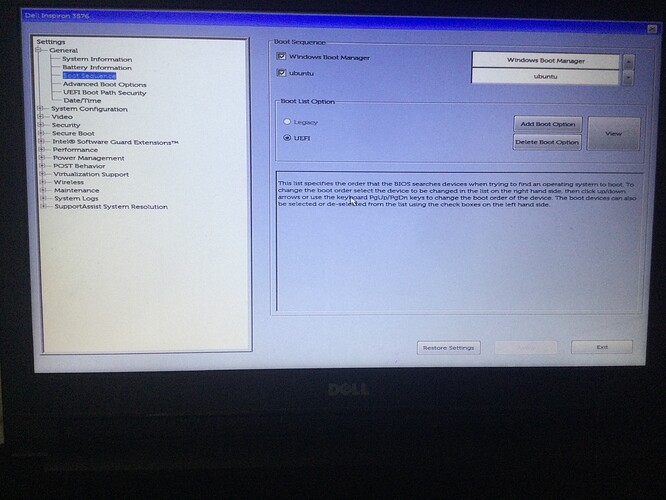 So I just wanna ask that will it be a problem for me if I try to install Ubuntu using the same method in the near future?

I know it’s weird having a long message just to ask a simple thing. But I think it’s better than having nothing of an information

Good to hear, but is there any way I can remove it from there?

In your picture above it has delete underneath the ticked boxes. Untick the Windows UEFI, keep Ubuntu ticked and push delete. You’ll have to delete the Fat32 file on the Ubuntu partition of your hard drive. You can install Gparted in Windows and delete it that way. So make sure you delete the Fat32 on Ubuntu side of your hard drive first. Your Windows will still be safe, for as long as you don’t touch the NTFS partition on your hard drive. Also after deleting the UEFI out of your bios remember to save by pushing F10 on your keyboard, you probably know this already, but I have seen a lot of people not save their bios settings afterwards and then they wonder why nothing has changed?