Which one I should use Xubuntu or Kubuntu

I Like both but which one is best performance wise ? I am confused .

Kubuntu will give you a very customizable desktop. Once you find all the things you can change, you will be happy with your creation.

For a lower end system - I’d always recommend XFCE over anything else… despite what others say, XFCE is very customisable… I run XFCE on RPi 4 (with 8 GB RAM : armhf raspbian) and used to run Xubuntu on an ancient iMac (2,1 model - 2 GB RAM and dual core) and it was just fine…

Having said all the above - all my other x86 systems have at least 16 GB of RAM and my gaming desktop has 40 GB - and I just run the latest Ubuntu LTS with gnome - and I don’t really care to try KDE or try to compare it to gnome… I like gnome (but kinda preferred Unity and I miss it - but from a support perspective - nada - I’ll stick with a fairly vanilla Ubuntu experience - there’s too much stuff missing in the recent re-spins of Ubuntu with Unity).

I Like both but which one is best performance wise ? I am confused.

If you are looking for the best performance-wise, go for Xubuntu. Xubuntu requires 500MB RAM, 2GB is recommended. System Requirements « Xubuntu

I’d always recommend XFCE over anything else…

Yep me too, I’m using XFCE Linux Mint’s version. Just got rid of Flatpak that they seem to only be using, as they said no to Snaps. Flatpak is rubbish too, as I have said on this Forum many times. XFCE is very customizable. I’ve installed Nemo in mine, as cannot stand Thunar. The beauty about Linux Mint, is the fact they make their own apps and keep them simple to use, as it used to be in Gnome 2 days, but even more powerful. Xed pronounced zed a notepad text editor, but can use up to date coding with it too. Media Player called Xplayer pronounced Ex player is just like Totem player was all those years ago, but with added features, especially if you add the libdvdpkg codec, it will open up your DVD’s and play them. XReader pronounced Ex reader, a PDF reader with a nice dark mode in the options, just invert the contrast, it’ll put less strain on your eyes. Hypnotix app is to watch TV from all round the world, straight away, including Sky Sports somehow? I used to use Peppermint and love Nemo file manager and install it pretty much in anything. The only thing with Linux Mint is their theming, every single theme has Over-Shoot lines when scrolling through menus and such. I made my own theme, using Peppermint’s theme as a template, just called it Smooth which it is. My icon theme is Sardi-Ghost-Flexible Grey, as it blends in nicely with my theme. 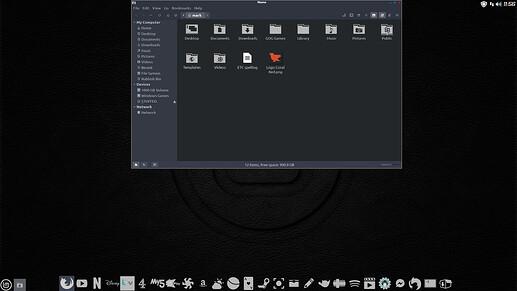 Desktop2560×1440 465 KB
I have three panels altogether and the bottom one is all the apps I use, it automatically disappears when not in use. Made web shortcuts to YouTube, Netflix, Disney Channel, Channel 4, Channel 5, UK-TV, Amazon-UK, BBC Weather, It Foss Community, ClipGrab, which uses YouTube-DL incorporated inside it, Steam for gaming, Simple-Screen-Recorder, Nemo file manager, Xed, GIMP, Kdenlive, Xplayer, Thunderbird emails, XFCE-Terminal and Synaptic Package Manager, as I don’t need any other package manager.

Will be getting rid of Facebook soon, as at work we’re now using WhatsApp, which I have an addon for in Firefox, but you have to have your phone on wirelessly to link it to your browser. I like a Desktop that I can customize the look and feel of, to make my life easier, than having to keep using the menu all the time, just have to click an App I want to use, boing it’s there instantly, without having to search for it. The only other app on my panel I have not mentioned is World Of Solitaire, online game of Solitaire with billions of free Solitaire games to play, without being spied on, totally free too.

The choice of DE is a matter of taste, but if lightweight and functionality are more important than “eye candy”, then LXDE cannot be beat. MATE is based on GNOME2, which is much lighter on CPU and RAM than GNOME3. MATE is also very customizable and not heavier than Xfce. If you prefer Qt over GTK+, the much lighter alternative to KDE is Trinity DE, which is the default DE in Q4OS https://q4os.org/ Both Ubuntu and Q4OS are based on Debian https://www.debian.org/ , which is also an excellent OS choice.
My LXDE desktop with 2 lxpanels (left and bottom) on Debian 10 Buster: 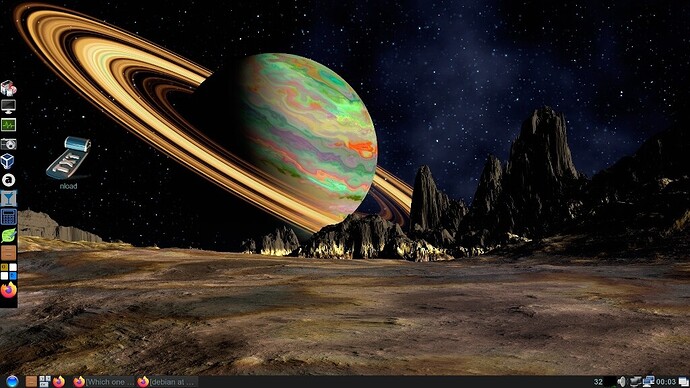 If you want performance, use MX Linux. You have your choice of XFCE or KDE. I tried both, and prefer KDE, although it uses a little more ram.

I tried both, and prefer KDE, although it uses a little more ram.

And KDE has tons more features.