Here's Why Firefox is Seeing a Continuous Decline for Last 12 Years - It's...

Firefox is witnessing a decline in its userbase for the past 12 years. Dan expresses his views on the 'why'.

I do not agree that much with the first two points.

From a GUI Design perspective, it is best practice to use the corners and edges of a screen for elements of your program, that are used most of the time. That is the reason why the Windows/Super button is always in a corner. That’s the reason the close button for each window is in a corner. Et cetera.

Putting the tabs “on top” is a good idea, because you can just move your mouse to the edge of the screen and you are right where you want to be: at your tabs.

If you go to that link, where it shows Mozilla’s announcement about this UI change, then you can see that the old design does not use the top edge, at all. It’s just empty space, followed by the search bar. This is worse design than having the tabs on top.

Of course, one could’ve argued, that the search bar could be on the very top instead. However, what do you use more often, the search bar or the tabs? Even if you answer “search bar”, the edge is still better used for tabs, as they use more space, which means the edge is used more efficiently than wasting the whole edge length of a modern monitor for a single search bar.

Therefore, it was a good design decision to put the tabs on top.

I know how it is as a user! You use a special and very helpful feature in your program and suddenly it disappears, because “nobody” is using it. I know how frustrating that is and it annoys me, too, seriously!

However, let’s see this from Mozilla’s perspective. You have a browser, that is used daily by millions of people around the globe. You already have tens or hundreds of developers employed. You have like a bajillion tickets, concerning bugs within your product.

It sometimes can be a great relief to remove even small features, if that means you reduce the amount of tickets and you stop the necessity of maintaining a feature, that is maybe used by 1% of the user base. From the perspective of the developers and publishers, it often makes sense to remove such features.

Therefore, it cannot be simply portrayed as “only bad”.

It has pros and cons, as all things do.

We discussed this topic before:

This article points out a couple of good facts about the situation, however there is a single fact that almost always gets lost in such a discussion: Firefox and Google Chrome mainly pretend to compete. If you look at the business relations between the two on the surface, it seems like they compete extremely with each other, right? Wrong. The reality that apparently barely anyone knows about is that Firefox is already indirectly part of Google for a long time. So, all the “competition” goi…

I think the main point I made with the previous thread is still the most important aspect. We don’t have two competing browsers, but we have 1 dominant browser and Firefox is its bitch. But it happens so slowly and subtly over years or decades, that most users do not notice, how they are not really competing.

how they are not really competing.

This is one of many things that I like about Firefox. The amount of choice and security in Firefox, compared to Brave, Opera and all the other ones that are based on Chrome. In the article there is a lot of stuff I don’t agree with, like users getting fed up of taking things away. He must of been thinking about a really old version of Firefox, when he said about it being memory hungry, it isn’t. If anything Firefox is slicker and faster now than it ever has been before. People want things done yesterday and like I’ve said before, they are so used to using Chrome on their Mobile Media, that they want the same speed on their PCs too, never mind the fact, that Firefox can do everything virtually as Chrome can. Google has brainwashed people that they and their products are the best in the world, but to a big cost to the user.

Since when can anyone stop Chrome from remembering every site that has been visited? Even incognito mode remembers. Firefox gives you the user the choice of whether you want to save your history when you close it down. The thing is, is that Firefox is different to any other browser and they do their stuff so well, that Chrome users start comparing Chrome and Firefox. I like the security, choice and knowing that I’m not being legally spied on unless using Google search engine. I use Duck Duck Go as my search engine, use a HTML script saved in /user/lib/firefox/homepage Which opens Firefox up much quicker, because it isn’t reading off of a website. Made my own background for it too. 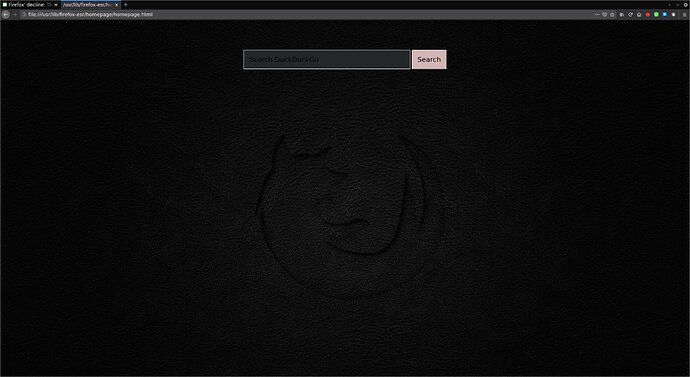 The thing is, is that yes for years now Firefox had to go with Google in partnership, because Firefox or Mozilla even were becoming rather skint, they did not want to join in with Google, but with nearly everything they introduced into Firefox failing to make them any money, they had to make a really hard decision. So instead of having Google plastered all over Firefox, they earn money from advertising or showing Google’s search engine, still giving the Firefox users the choice of which search engine to use. It’s this that people do not know about, is when you dig deep into the mechanics of Firefox, you’ll find in my opinion anyway, that
It's probably the best Web Browser in the world... Plus you can delete Google Search Engine out of the settings, can’t do that in Chrome.