For those who want a full on answer - sorry about the F.word but it made me laugh 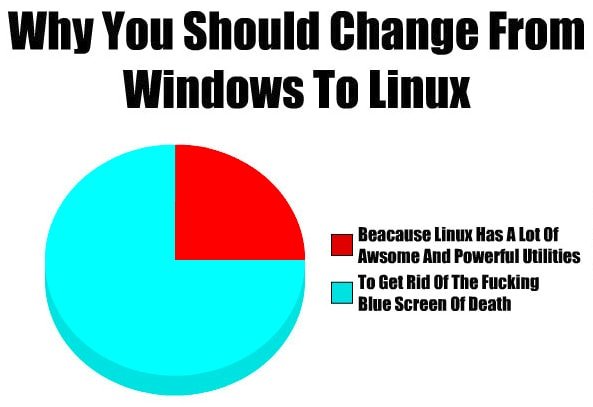 To get rid of Windows 10 shoving everything you don’t want up your ass… Like, seriously…

Funny coincidence.
I have set a little “rant” on that topic for our regular meeting tomorrow: “Linux on all Desktops? Do we really want that?”
Nice reading here. Kinda old, but mostly still accurate…

Please DO NOT APOLOGIZE for your language. Words are words. It is only the intent that I would worry about. FYI, I would reverse those percentages. WindBloze isn’t vaguely in the same league as Linux or any of the *nixs.

Not really wanted to knock windows with my original post it was meant to be funny, well it made me laff and this section is called HUMOUR not let’s have a go at Microsoft #justsaying

I don’t really understand what you mean.

I meant some comments posted here were off topic which is humour. The post I put on here was meant that way so any responses should be within the humour not serious. It made me laff because of the BSD and nothing more - I will be more careful in future

What was meant to be serious? I only see appropriate comments, counting in the one you deleted.

When did I say that? The only thing I worry about is that some comments get deleted without purpose. Never did I say you shouldn’t comment something.

One good thing about using windows, when you switch over to Linux it’s like going from a Fiat to a Ferrari.

Years ago I used Windows Vista and the dreaded blue screen was an ever present problem. I changed to Linux in 2015 from Windows 7 (which I did like) but I found Ubuntu 14.04 much better to use. A friend of mine changed from the unity desktop after a few years with that and downloaded Ubuntu 18.04 and a couple of weeks ago, guess what? He got a purple screen which he said was the same as the Windows blue screen. I have not struck this myself as I changed from a unity desktop (which I still think is the best) to Linux Mint Mate.