I've been thinking about this

Hi guys, i’ve been thinking about this, you know that MS Office is not available in linux right,
so there are alternatives like libreoffice, now this is the thing. Libreoffice is open-source and free so i dont think they get that many money, but they are still porting there apps to the three platforms Windows, Linux And Mac, but on the other side MS Office is paid, atleast to use all the features and plus they have other products like windows onedrive and other so they got thousands if not milians of dollars to port MSOffice to linux, if a free program can do it why cant a paid program do it???

Hi Kitt,
It’s the nature of the Licenses under which each is developed. MS does not release their underlying code. In fact if you use their code they will sue you for doing so. While under open source the code is required to be released and can be used by anyone willing to do the work and modified and so on. In order for MS to keep it’s code secret and make money off of it they go to great lengths to protect it. MS licensing goes against Free and Open Source philosophy of doing things. So I would not look for them to port their Office suite for Linux anytime soon. It’s a big money maker for them.

They COULD port office to Linux, as they did it with Teams, and Skype.
They just don’t want to make this step.
There are good examples for paid software on Linux.
Softmaker Office is a very good, capable office suite, you can get it for subscription, but also a one time purchase for a licence works.
You can also try Freeoffice, which is is free of cost, still not FOSS, it’s an older, and somewhat cut-down version of Softmaker Office.
Then there’s Davinci Resolve, which is a paid software too, but still free to a certain point. It’s totally crossplatform, works on Mac/Win/Linux.
Turboprint is paid too, it provides all the functions of the supported printer under Linux, which would otherwise unavailable through cups+gutenprint. It comes handy if you have a printer from a manufacturer which just ignored Linux. And there’s Vuescan, which is for scanners not in SANE list.
Crossover from Codeweavers is also paid, think of it as a WINE implementation - but not FOSS.
And these are just I know personally, probably there are others.
So it’s certainly not a technical impossibility to produce paid software for Linux.
I think, if MS would port their Office natively to Linux, Windows would loose a strong selling point.

You are in essence quite right but I suspect that this is not 100% correct as this is the reason for the gnu and FsF orgs and The four essential freedoms. Some parts of apps are not free code so take care to get the real deal from……

@kovacslt Well said…. Always follow the money. Fantastic riches for owners and investors and the tool of your gov too…… What revolving doors…?

if MS would port their Office natively to Linux, Windows would loose a strong selling point.

That’s the point! Without Office, Microsoft has no reason to exist. It’s their only cash cow. We can just go elsewhere for our milk.

That’s the point! Without Office, Microsoft has no reason to exist. It’s their only cash cow.

What about their…
365 Office apps, intelligent cloud services, and world-class security – LOL

For a price includes MSoft – Meet – no not meat…!

Skype and teams is not really free on any platform !
Planning from Microsoft is for you to pay, Skype will go and be involved into teams which today is only free if you don’t have office licence and for home use.
Microsoft never give things for free … even 10 upgrade … planning is to rent everything they do. Like office 365

Skype and teams is not really free on any platform !

I didn’t mean it was free. I just meant it is ported natively.

This came preinstalled with v9 of Trisquel… 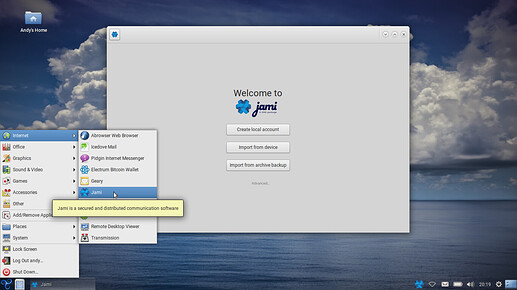 Apparently both free and easy to use without asking for personal details… but have you used it…?

but have you used it…?

I tried it 2 years ago and it was garbage. I tried it again a couple of weeks ago and it still is garbage.
Messages don’t arrive. Voice calls are extremely bugged. Pretty much nothing works. I honestly want to know how people are seriously using this, if anyone really does, at all.

This software is absolute garbage, because it simply does not work.
Apparently, just changing the name of your software doesn’t magically make it work.

I confused Jami (Ring) with Signal.

Now there is a challenge

Was going to buy a webcam so that inbuilt can stay taped over but will now remove foil and tape.

Perhaps it works better on a computer. I exclusively tested the respective mobile apps, as I already have different solutions available for use on a computer.

So now there is another challenge

Must drag Jami out of F-droid and install it on my Pixel 3a running grapheneOS and have a conference with my great niece who has just installed it on her Android phone without problem. Perhaps invite Edward Snowden…?

The main “Skype” product used in Enterprises, “Skype for Business” was just a name - it was NEVER ever ported to Linux, had no code whatsoever from the Estonian developers of “Skype”, and was really just a port of the legacy code for their HIDEOUS messaging suite “Lync”… That Skype4B was a steaming pile of crap - it had a web client that would ONLY work in Internet Explorer - seriously?.. So glad my employer no longer uses it…

Having said that - I use Teams daily, all day, chat, conferencing and VOIP calls… ON LINUX only… it works… (I just wish MS would respect X11 window managers, and not implement its own shitty widgets)… In my experience, it’s more responsive, with less lag, than other things like Cisco WebEx, Cisco Jabber…

Libre Office V MS Office - I loathe both products - but on usability - I think Libre sucks more than MS Office - truly… Libre Office is even more crappy at doing shite I don’t want - e.g. I’m typing some technical doco, and include a forward slash and Libre Office decides “no, you didn’t really want a forward slash, what you really wanted was the whole sentence after the slash to be italics! Trust me I’m a computer program, I’m smarter than you…” Grrr! I actually tried some other “office” suite and it was just as crappy - I’ve decided I just HATE ALL office suites - they’re all crap - why can we all just type shit (raw ASCII/ANSI/UTF text) in MARKUP or MARKDOWN FFS???

if MS would port their Office natively to Linux, Windows would loose a strong selling point.

Actually, I don’t think, MS is making any money on the operating system any more. The most important aspect of it is to keep corporate customers tied to their infrastructure.

It’s a shame that text editors like Gedit, Xed don’t do office stuff, then maybe we wouldn’t have to rely on heavy apps such as Libre Office Suite and the like. Surely there is a way of making a text editor do the same as Libre Office or MS Office without the bloat? Just with plugins to hand when you need them. Could be something like a choice when you open say Xed of either a text editor mode or office mode.

Hi Daniel, can sense the anger – it takes me back to Win3.1 – 95 days when I tried to use Word or whatever crap MSoft were shipping those days. Hey even those new fangled electric typewriters let me type what I want how I want. Noticed this box in a shop – Serif PowerPlus Publishing Suite labeled Win3.1 but Win95 ready – cool. Bought it and never looked back as you could save out as a doc, pdf, whatever. Serif are just down the road in Nottingham and I still use their PagePlus and PhotoPlus today on XP-Pro and on Linux under wine.
But since moving to ubuntu-16 and Trisquel I force myself to use native apps like LibreOffice and having tried a few other native apps I find Writer and Draw very good even if it has so many features that I do not use.
Version: 6.0.7.3 Build ID: 1:6.0.7-0ubuntu0.18.04.10
CPU threads: 2; OS: Linux 4.15; UI render: default; VCL: gtk3;
Locale: en-GB (en_GB.UTF-8); Calc: group

Unless once again Trisquel have tweaked LibreOffice-6 to be so cool straight out of the box (try ABrowser sometime) I found your comments….

I think Libre sucks more than MS Office - truly… Libre Office is even more crappy at doing shite I don’t want - e.g. I’m typing some technical doco, and include a forward slash and Libre Office decides “no, you didn’t really want a forward slash, what you really wanted was the whole sentence after the slash to be italics! Trust me I’m a computer program, I’m smarter than you…” Grrr!

Appologies accepted on behalf of LibreOffice and

in the eye MS

Surely there is a way of making a text editor do the same as Libre Office or MS Office without the bloat? Just with plugins to hand when you need them.

It’s definitely possible, but I suspect the general interest in this matter is too low for a plugin to already exist.

Hey @Akito and @clatterfordslim why bother…. espicially with all that cumbersome K stuff…

Just install Focus from your repository

I used it quite a lot when first time in Linux ubuntu; for its stark simplicity of being just like a sheet of writing paper on a wooden desk – no, not quite dip your quill in the ink, but close…

That used to LibreOffice these days that I can focus out the menu clutter most of the time.

FocusWriter An App For Distraction-Free Writing

FocusWriter is a distraction-free word processor program that hides all the interfaces: menu bar, toolbar, status bar, etc and starts in fullscreen mode to enable the user fully immersed in their work. The program’s primary feature is to focus only...

Surely there is a way of making a text editor do the same as Libre Office or MS Office without the bloat?

There is, check out my post in another thread:

Rethinking the issue, I thought: Who needs an office package anyway, when you have GNU-Emacs, the Swiss army chainsaw of editors already installed on almost amy *nix style operating system? You need prettily formatted text? Emacs’ latex-mode is your friend for creating professional book-publishing grade documents. You need to prepare slides for a presentation? Same. LaTeX already comes with a slides style. Calculations? Emacs’ calc-mode does them for you. If you need to do advanced statistic…