This method would be: https://linuxmint.com/download.php

Dual Boot method, subject to your system specs, (UEFI or Legacy). Install along side your 18.04 install.

If you do not mind cross-pollinating your desktop environments by have more than one file manager, etc, look in Synaptic Package Manager under “Tasks” and look for Cinnamon. But Not recommended

The thing is, I am already using Cinnamon alongside Gnome in 18.04. But it is an older version from embryon PPA. I was looking to get the latest version.

You won’t need to use PPA with Linuxmint, it is the latest Cinnamon version, and uses the 18.04 platform.

Not heard of, nor does a web search reveal anything about embryon PPA: https://duckduckgo.com/?q=embryon+PPA&t=ffcm&atb=v153-3&ia=web

If Ubuntu Gnome 18.04 was installed first, you can use Gparted within Gnome to delete the Cinnamon partition(s), then install Linuxmint along side. Thus you will have the latest Cinnamon desktop version, developed by the distro team that has been the the patron of Cinnamon due to their continued development of it, year on year. How to Install Cinnamon Desktop on Ubuntu

Tutorial with screenshots to show you how to install Cinnamon desktop environment on Ubuntu.

I used the link above to install Cinnamon. It works fine if I choose while login.

You don’t have to do so as when you login you can choose which DE to do so in. If I remember correctly and @abhishek will know better than I do you can add as many as you want to do so to change over to at log in.

He has already installed Cinnamon DE along with the default GNOME. What @meetdilip wants here to have the latest Cinnamon because the PPA mentioned in the article doesn’t have the latest version of Cinnamon.

@abhishek , any PPA with Cinnamon 4 ? Trusted as well.

There are a couple of them but none official.

@meetdilip If Cinnamon is so inter-connected with Linux Mint, maybe their forum could enlighten us, more. Could you ask there and tell us the results?

To overcome these differences, the Linux Mint team initially set out to develop extensions for the GNOME Shell to replace the abandoned features.

Since October 2013 (version 2.0 onwards), Cinnamon is no longer a frontend on top of the GNOME desktop like Unity or GNOME Shell, but a discrete desktop environment in its own right. Although Cinnamon is still built on GNOME technologies and uses GTK+, it no longer requires GNOME itself to be installed.

I don’t know if you have tried this or if others have tried it, but I found this link when I was looking for something else this afternoon
http://ubuntuhandbook.org/index.php/2018/11/install-cinnamon-desktop-4-0-ubuntu-18-04/

Their attitude was awesome 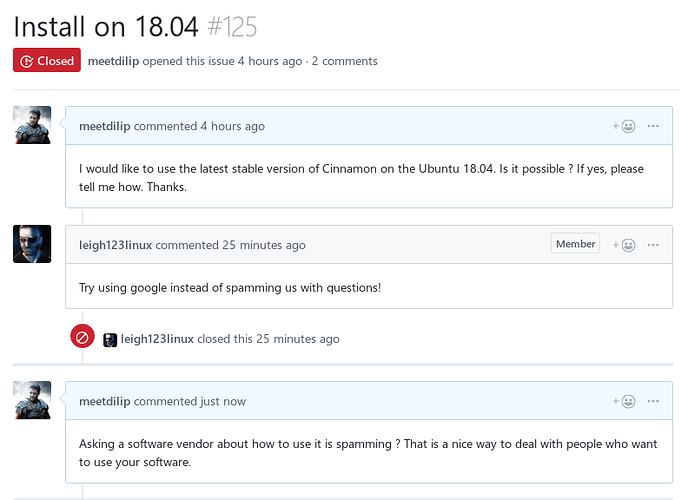 You should have specified that you want them to maintain a PPA, not unofficial developers.

He replied further. Said they vend only to MInt. For Ubuntu he suggested lmgify.