Most disappointing Article from ITSFOSS

This is the first time I am truly disappointed in an ITSFOSS article.
The problem here is, that there are facts (not opinions) supporting a different ranking of the displayed apps. I highly doubt the apps were thoroughly tested by the author himself.

Here are my results, but they are confirmed by several knowledgable and also less techy people:

I already compared some messengers before:

One messaging app to rule them all? Application

The best solution for that is to filter out your real friends. Here is what I did: I changed to Threema and told everyone that if they want to talk to me, I will only be available there from now on. My real friends switched over and 1 or 2 people did not. Nobody would refuse to install 1 additional app on their phone rather than staying friends with you, if they are really your friends and understand that the decision you make is important to you. Note on the app’s price: It’s 420% worth it,…

Just recently Threema released a very great messenger comparison. All this is fact-checked: 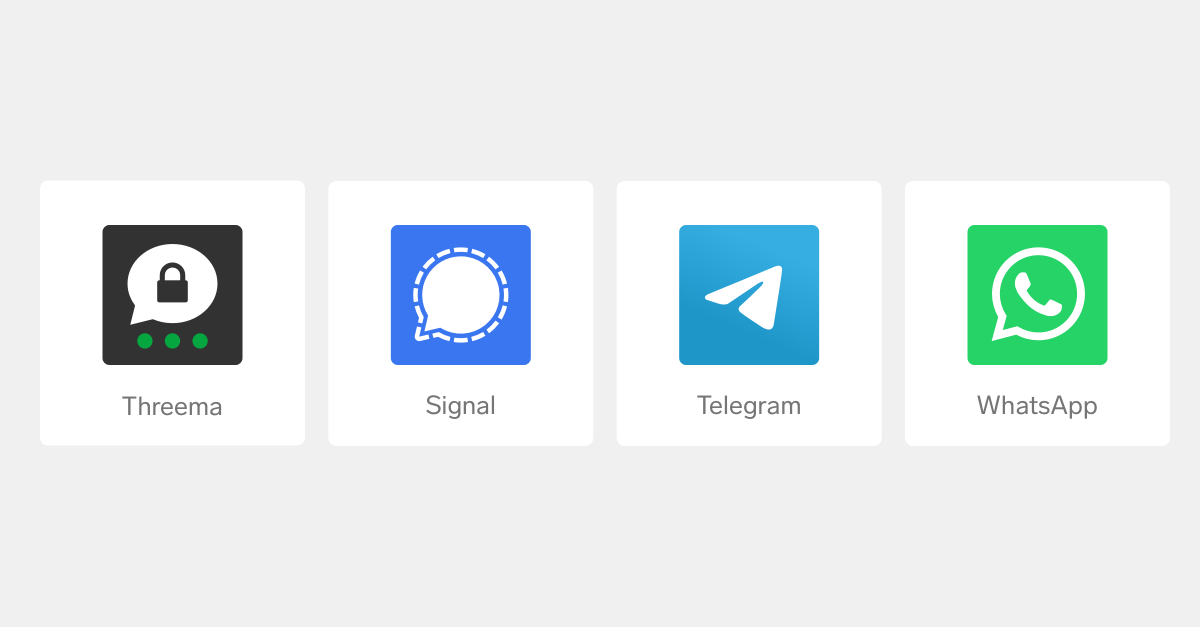 If you want security without sacrificing more usability than absolutely necessary, there is only one choice:
Threema.

Whoever says something different literally does not know what they are talking about, because these facts are so clear, nobody who dove into this topic deep enough can deny.

Telegram - don’t even get me started

Well, some people use TikTok because Google spies on them on YouTube…

I sort of agree to @Akito whatsapp does not really have a match and it’s the most powerful one, all my friends and families use it

I understand your point as an informed user. There are several factors and different views behind that list. Please hear me out.

First, it’s not a ranking list. It’s just a collection of services presented as choices to readers.

Telegram’s end to end encryption was cracked by authorities. Fine. It’s not necessarily about providing you military grade encryption. Telegram is a WhatsApp alternative in the sense that it provides all the mainstream feature and doesn’t share your data with Facebook. This is for people who care more about messaging, i.e. general public.

Session didn’t work in your experiment, but it should not be a blanket statement for everyone. Unlike Telegram, it is not a messenger for everyone but for privacy concerned people who can take a bit of inconvenience for a more secure messaging.

You didn’t say anything about Signal so I presume that you are okay with it.

Element is indeed just a Matrix client. This is for a more advanced and technical user who understand and care about the underlying technology.

Threema is an option for those who wouldn’t mind spending money to secure their messaging. Keep in mind that not everyone will be willing to pay for a messenger when there are tons of free services available.

Your verdict was Threema which is fine by you because you do not mind paying for the service. That might not be the case with other people.

So altogether, the list tries to give alternatives to people of various background and different needs. The list has some information so that readers can make a decision (or investigate further) on their choice of messenger (if they are looking to switch from WhatsApp). Just like you found Threema (I am making an assumption that you came to know about it from It’s FOSS list), some other reader may like Telegram/Session/Signal.

I did not mention it, because I did not bother to confirm it, yet:
Since the Threema app has become open source, it should be possible to use it without payment. I don’t want everyone to just use it for free though, because the company behind it deserves every penny in revenue.

First, it’s not a ranking list. It’s just a collection of services presented as choices to readers.

I thought this might be an explanation, but it does not explain how everyone who read the article seems to understand it as a ranking list. Perhaps it should be made more clear in the article, that it is not a ranking list.

It’s not necessarily about providing you military grade encryption. Telegram is a WhatsApp alternative in the sense that it provides all the mainstream feature and doesn’t share your data with Facebook.

That’s what Threema is too, but much better. If people are poor, but have an Android phone, they can meet together, buy Threema for 2.99/5, by splitting the money across 5 users who would all use the same family library. I think, 0.598 should be bearable for everyone who can afford a Smartphone in the first place. Additionally, every Christmas Threema is discounted to 1.99, so 1.99/5 makes 0.398 per user and Threema license. I am sure, that everyone who can afford a Smartphone can afford to pay 0.398 for the messenger app with the best mix of usability and security/privacy.

Session didn’t work in your experiment, but it should not be a blanket statement for everyone.

Perhaps it works for a minority of people, but I tested it with several different people who all have different phones and locations, and it never worked. So I consider my experiment pretty noteworthy.

You didn’t say anything about Signal so I presume that you are okay with it.

I noticed with this article, that I actually confused Signal with Jami (Ring) so I had a worse impression of Signal than I should’ve had. Still, not a good app, as can be seen in the linked comparison between the messengers.

Sure, I wasn’t shocked by the ranking or anything, I just wanted to voice a different view point regarding the messenger comparison. Perhaps it may have sounded a bit more harsh in the original post, but I still think my original point is more valid than the original article’s point, as it is the easiest and best to switch to Threema, if you just used WhatsApp before. You said yourself, Matrix and Session are for more techy people and Telegram is easier but not so secure. So the alternative that remains is Threema, because it is more secure than Telegram AND easier to use, just as easy or even easier than WhatsApp.
So if we are talking of getting people from WhatsApp to a better messenger, there is only one option in this situation, that makes sense: Threema. All other options don’t make sense for people who only used WhatsApp.

Just found out that Threema is

Which I find to be rather confidence inspiring.

For those who are wondering, I have removed all political discussion from this thread.

My experience is that you put politics anywhere and it creates friction, rather than discourse.

So, all of us, please let us stay on the topic of Linux and open source and avoid going off track, specially in political direction.

I am also closing this topic so that we put our energy and attention in helping members with Linux.