Nero DiscSpeed: Another chain tying me to Windows

Many thanks for the tip on WPS from Mike Middleton.

Here is another program tying me to Windows: Nero DiscSpeed.

In my old age, I have decided to sell off all my books and CDs. Before I send a CD out, I test it for playability. Nero has a superb program that scans the surfaces of all optical media and provides results in terms of readable sectors. It allows me to identify the track number and, by implication, the physical location of the problem. I have been able to find and clean nearly invisible smudges this way.

I have searched widely, and have only found one program that only works on DVDs. The results are also nowhere near as useful as Nero’s.

i don’t know of a replacement and couldn’t tell from a quick search if discspeed was bundled in with burning rom. the reason i mention it is that there seems to be some limited support for older versions of burning rom with wine. otherwise the question of whether or not you feel like it would perform well enough on a virtual machine is again on the table.

@01101111 I tried installing it with WINE and it did not work. This could be due to my inexperience. Would you be interested in trying it out?

I used Version 7, dated 2010, which at the time was the most recent version that Nero provides for free.

i don’t mind giving it a go. do i recall correctly that you are using mint? just want to make sure i try with specs similar to the ones you will be using as well.

Nope, Ubuntu, but that should not make a big difference, right? Also, I would be happy to use a newer version of DiscSpeed, if Nero has it for free.

Here is a screenshot of a CD needing a good cleaning. 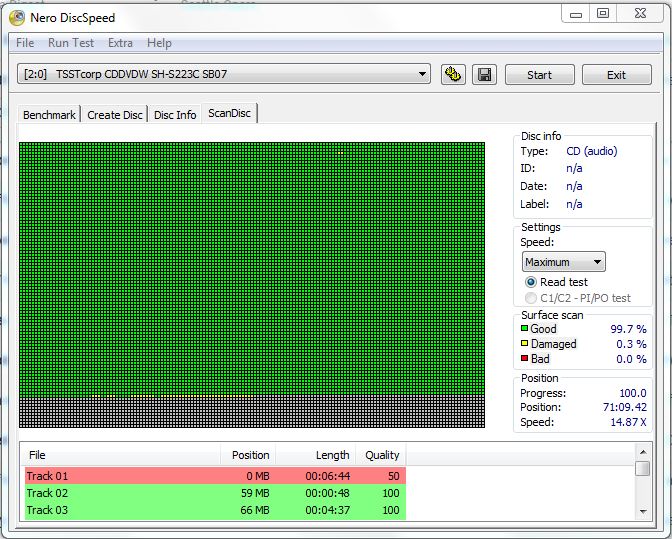 as far as i know, since mint and ubuntu are both debian-based they should play nicely together. i actually use an ubuntu-based (bodhi) distro and keep ubuntu mate loaded on another partition just in case. i will try loading up in ubuntu mate since it is a fairly fresh install.

interesting that you mention a newer version. i got one from major geeks that said it was 7, but after unzipping says 11. there is one over on cnet that says it is 12. most interesting of all is that over on nero’s legacy downloads page they list nero linux 4 without any description whatsoever. i am a bit intrigued by that one.

i got one from major geeks that said it was 7, but after unzipping says 11.

now i see. a different page had a v7 download as well. that one said it was nero 11 including discspeed 7. i will give that a shot.

I also saw that contradiction. I think the Nero Burning ROM bundle was version 11, but the DiscSpeed element was version 7.

I tried installing it with WINE and it did not work.

unfortunately i ended up with the same result. add/remove programs shows that it is installed, but there is no exe in system32 or syswow64.

as far as i know, since mint and ubuntu are both debian-based they should play nicely together.

Usually that works out, and probably for most usual cases. Though, the deeper you go into the system, trying to change/adjust something to your needs, the higher the propability gets, that you need to keep the differences between Ubuntu and Debian in mind. There is also a reason that when software is provided for Linux, there are most of the time separate Ubuntu and Debian packages, simply because some packages in Ubuntu are either named differently or consist of different structures. From my personal experience I noticed, that Ubuntu often has some extra dependencies that aren’t needed in Debian, as well as sometimes you need to do some extra configuration on Ubuntu. I don’t exactly remember what it was, but the last time I saw this particular type of disctinction was when I saw a hint, that specifically on Ubuntu you need to add file XY to a certain group or the program won’t work. On Debian this wasn’t needed.

i just opened xfburn and didn’t see any kind of disc scanning/readability tool (just the usual burning/blanking rw discs) unless i missed an option buried somewhere. for what it’s worth, buried in its legacy software pages nero does offer nero linux 4 (i grabbed the .deb, but it also came in rpm) which looked like the nero i used over a decade ago. i didn’t try it for functionality as i was mostly looking for the discspeed element (which was not included) before moving on to the wine install.

To be honest as I hardly have the need to burn disks these days and the last time I used Nero it came as bundled package in Windows Vista (yes I was the one who used that) - did a bit of digging around and came across these https://opensource.com/life/16/9/alternatives-nero-cd-burning don’t know if any here will help

Burning a CD is not the issue. Checking the quality of commercial music CDs is the problem. I am selling all mine, and want to perform a surface scan to make sure the buyer will be happy.
Brasero works beautifully as a burner, and K3B is excellent as a ripper. But surface scans? Only DiscSpeed seems to have what I need.

I thought most of them did that these days - surely there must be one that does just looked in the software manager and couldn’t see much in there that you need - have you seen this one http://simpleburn.tuxfamily.org/-Home- if not you might have to do Nero in Wine or PlayonLinux to get the results you want

Hi, there isn’t really a CD/DVD checker that I know of with a GUI but cdck is a command-line program.
Have a look Here and Here
I’m not sure how comfortable you are with building packages so if you are using a Debian-based distro (Debian, Ubuntu, Mint) then download and install the .deb package. If you want to build from source, download the latest .gz - version 0.7.0 from the second link and extract the source code
tar xvf cdck-0.7.0.tar.gz
then cd to the directory that was just created, run
./configure
then
make
then
make install
and voila, the package is built and installed.

@martynjlewis79, the program looks perfect in print (well, window). I found the Debian package, installed it effortlessly and updated it. There is a man page for it, so I ran the main command:
cdck -tv
and it gave back the error message:
Unable to read disc because disc_status != CDS_DATA_1
Online discussions seem to say it will not work with audio CDs. I wrote to the maintainers; let’s see.

It also indicates that a graphic representation of the results is available if I had gnuplot and ran the following:
$ gnuplot>plot “results.dat”
Well, that is another program to add. If I can solve Problem #1, it may be the answer to my question!

Thanks for that tip!

@martynjlewis79 sorry to say, but the creator of cdck wrote the following:

Cdck is only does timings on data CD/DVD, so it is not for CDDA etc.

@cliffsloane it occurred to me that i was looking specifically for nero.exe just because that was what the terminal said was missing when i tried to run wine nero. can you check when you run discspeed to see if perhaps the exe has some other name? and, if possible, it lives in system32 or syswow64? my guess is 32, but just to be sure