corporate espionage on my web activities

Thank you, Mack. Not to stray further off topic, but issues of privacy have become paramount in a world where it is nearly impossible to have an honest conversation about all of the pressing matters of our time.

Our government has been bought and paid for as have many others around the world. Europe is in as deep a morass as we are here. It is hard to find a reason to hope for anything to improve, but I insist on having hope.

Using Firefox and DuckDuckGo are just the start of me walking away from corporate and government BS on the web. I hope others will do this as well. Cheers!

so I’m in the process of ditching them completely.

I appreciate your sentiment. Just yesterday I was looking for a new free email service to replace my GMail which I have had since Google offered it. I will start a new thread with the subject “Dropping Google? What are your options?”

Speaking of…
F-Droid mentions that the Browser from DuckDuckGo promotes “unfree Services”, which I haven’t found out yet, what this services are.
I’m currently testing “Privacy Browser” by Soren Stoutner, available in F-Droid too.

this is the description of the NonFreeNet feature of duckduckgo that f-droid provides. admittedly, it doesn’t say much more than the name itself:

If not everything is open source, I guess then it counts as “non-free”. I am not sure if every part of DDG’s engine is open.

Or maybe it is just because of ads. They aren’t dependent on the viewer though, these are just random ads that every random user sees, when using the search engine without any ad blocker.

Or maybe it is just because of ads.

this was my original thought as well. though the description in that link mentioning

would seem to indicate that any direction of traffic to any hop along the way which isn’t explicitly open source (which seems like it would be hard to accomplish for any browser) could result in the same warning. 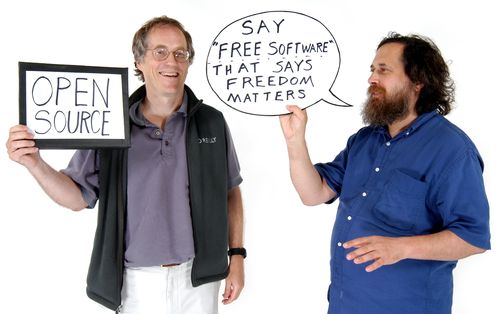 i understand that you were joking, but honestly don’t get the disambiguation.

I don’t say Free Software on purpose, because it misleads people who don’t have any experience in this field. Any normal person understands “paying $0 for software is free software”, that’s why I avoid using that term.

Ahem peeps can we all get back to what this thread is about and that is Browsers. It seems to have strayed off a bit, much like me when I go to fridge for some healthy snack and end up with lovely choccy

It’s the old quarrel about the differences between the Free Software Movement and the Open Source advocates…
Simply explained:
Open Source has the focus on the code that is available and the technical benefits resulting from that. They claim, that this is the better way to develop software.
Whereas the Free Software Movement has it’s goal in the benefits for the society from the four essential freedoms.
From my perspective, they are both two sides of the same coin.
I tend to be a Free-Software-Activist myself, though.

Think of “Free as in Freedom, not as in free beer”

Good readings: Free as in Freedom from rms and Cathedral and the Bazaar by Eric S. Raymond

Sure, Sorry.
I got taken away…

Not just you, but others as well which is why I made what I hope was a gentle kind reminder of how easy it is to do and I hadn’t noticed your comment

Decided to move this to a new topic, so we are on-topic, again. Now we can all continue talking about this.

Think of “Free as in Freedom, not as in free beer”

i’ve seen this quote a few times, but don’t think it is as self-explanatory as it is meant to seem to be. like @Akito said, if i don’t have to pay for something i would consider that free while also understanding that the world and tech have moved to a place where it is also possible that if a service (facebook is a good example) is free, you are the product. i don’t have any personal stake in any particular movement. for years before moving to linux i was impressed with mozilla’s take on privacy and openness.

@ElectricDandySlider while i appreciate your take on the matter (and defer to your request) as well as Akito’s opening a new thread, i feel like this discussion does pertain to browsers as far as the why is concerned. beyond functionality, i have for some time very much appreciated the mozilla/firefox focus on privacy.

The movement was away from Browsers toward Privacy, Open Scource, Free Software. These are different subjects to what the thread was about which was - What is your favourite browser and why. This new thread covers more than that and was not what I intended in starting the thread in the first place.

I agree totally with the splitting of it since some comments had veered away from that into the Privacy, Open Source and Free Software.

I am not sure if every part of DDG’s engine is open.

a quick search would seem to indicate that not all of ddg is open. again, i am not myself any kind of open source (or free/libre) purist. i just think it is interesting to discuss such things to keep myself informed about some of the products and services i use Learn more about DuckDuckGo and how to make the most of it.

DuckDuckGo (DDG) is an Internet search engine that emphasizes protecting searchers' privacy and avoiding the filter bubble of personalized search results. DuckDuckGo distinguishes itself from other search engines by not profiling its users and by showing all users the same search results for a given search term, and emphasizes returning the best results, rather than the most results, generating those results from over 400 individual sources, including crowdsourced sites such as Wikipedia, a The c...

but you also included the question of why in your thread title (as well as the discussion that followed). for some of us, addressing privacy is an integral part of our why.

again, i am ok with the split as well and defer to your request. i just don’t happen to agree that the two issues have no overlap