I’m using Linux Mint Tara and the UKUU utility says that 4.18.11 is available. I have 4.18.10 installed now.
I get "dpkg-deb: error’ - something about the package is not a Debian format archive. It’s on the linux-headers-04.18.11…-all.deb’ install.
Anybody have any suggestions?
THANKS!
Jim

ps. It would be REAL nice if I could copy/paste from the UKUU window but it won’t let me.

Perhaps you could try through the terminal if you’ve not already done so. Sorry can’t offer anything else I know this works for me when I can’t do things any other way

though UKUU is a great little utility it does not always work well with Linux Mint. Mint uses Ubuntu LTS kernels because Ubuntu adds patches that work with Linux Mint. So if your using UKUU for kernels then your installing unpatched kernel and they may cause more problems than they solve.

That being said the problem is most likely there are no headers available in mint for that kernel yet.
I would not update to it unless it is really needed for some hardware issue.
Just my opinion.

Thanks for the replies!
I have been using UKUU for a long time with only a few problems and I didn’t know about it not working well with Mint - good to know.
From what I can tell, it looks like installing with the terminal is considerably more complicated and, for me (a copy and paste kind of guy), prone to errors.
Although I like to stay current with the latest patches, I guess I just won’t install new kernels.
Thanks again to both of you for taking the time to respond!
Best, Jim

I suggest to stay with the kernel provided by Linux Mint. Unless you have a very good reason, try to avoid manual kernel upgrades.

PS. The last problem I had with UKUU was with releases after 4.16.3 and the fix was:
Temporary fix:

According to UKUU author, Tony George:
Canonical has made some changes to the mainline kernel packages that they provide. This is causing the installation to fail. Till they resolve this problem you will face issues while installing new kernels.

Thanks Abhishek!
I look at the comments about what is fixed with the release but rarely have any idea what they mean. As a former computer programmer, I couldn’t stand when users would complain of some bug that I had already fixed and they were using an old version of my program.
Do you mean waiting for a new release like Mint 20.0? How will the new kernel be provided? Apt-get update or upgrade? I’m clearly confused.
Jim

I wasn’t sure of that so thanks for this @kc1di as when I checked the kernel on Mint that I have the latest is 4.15.0.34 - I can not remember where I read it, probably on It’s Foss about sticking the kernel you Linux has as being the best advice otherwise you might run into problems. @abhishek has just confirmed this with his reply which I didn’t read before replying

As far as I know, Linux Mint provides kernel upgrades via its update manager. It could be level 5 update.

Thanks Abhishek!
That’s a bit clearer and I do use apt update/upgrade occasionally. Usually nothing comes up - I think because the Update Manager notifies me of package updates and I install them from there. And, yes, I do occasionally see level 5 updates in this application.
I’m still confused about the different pieces in this (what to me is still a) puzzle. I previously used UKUU when it notified me of a new release. Are these ‘distribution versions’? Also, I notice on Update Manager an option under ‘View’ for a ‘List of Kernels’, I’ve never updated using this option.
I’ve included some screen shots to see if it helps clarify what I’m trying to explain. The first is the current UKUU screen showing the version (v4.18.11) that I had trouble installing and started this discussion. The second is the Update Manager screen showing Kernels with numbers that don’t correspond to anything I’m familiar with (and, again, I’ve never used this option before). Are these the ‘distribution versions’???
Sorry for being so dense and, again, THANKS to all for your help!
Jim 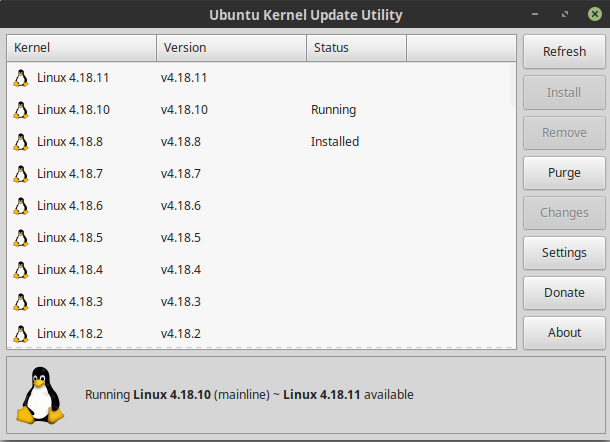 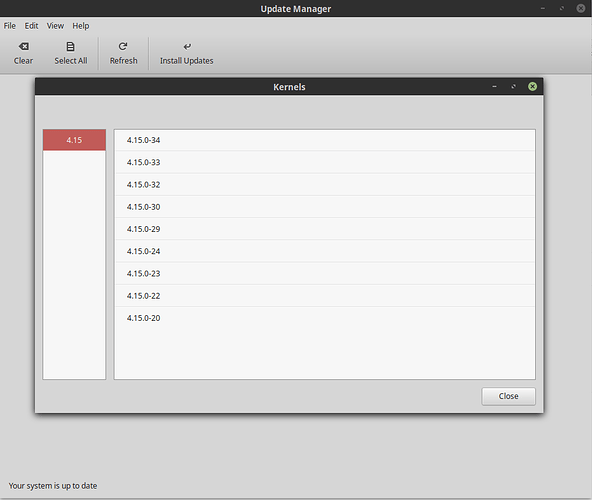 Looking at this, it does beg the question as to why with Mint being based on Ubuntu is it so far behind it on the kernels? Also what kernel are other distros running - This might be a different topic altogether, but does any one have an answer to this?

It’s not really that far behind, Mint 19 is based upon ubuntu 18.04 LTS which comes with kernel 4.15.x series and will remain there for it’s life cycle unless ubuntu chooses for security or update reason to change, This happened with 16.04. But the LTS kernel for 18.04 is 4.15. currently at verision 34 4.15-34 which is the latest available in Mint 19. Also Mint 19 no longer uses the update grading system and unless you choose other wise all upgradeable package will be updated. You can find out more about Ubuntu kernel releases on this page. Kernel updates Usually within few days to a couple of weeks of Ubuntu upgrading a kernel , Mint has it available. Also Ubuntu does not follow the kernel.org LTS and chooses it’s own LTS versions.

Thanks for that reply

Ukuu is an unofficial application that lets you install any Linux Kernel out there as soon as it is released.

This is not what your distribution does. Your distribution won’t provide you the latest Linux kernels. It remains on a stable kernel release which has been tested to work with all the components of the distribution. This ensures that your system in not broken because some component wasn’t compatible with the new kernel version.

In your case, you have used Ukuu to install newer Linux kernels such as 4.18.10 (that have NOT been provided by your distribution). What you see in UKUU is not what your distribution provides.

Your distribution on the other hand is still providing Linux kernel 4.15.x series and most likely it will remain here.

EXCELLENT explanation!
Thank you kc1di, ElectricDandySlider and Abhishek! Now I get it!
Thank you all for looking and discussing this problem with me!

I have had some problems with broken packages in Ubuntu. To fix them I go to the command line in the terminal and type the following command sudo dpkg –configure -a
Bob

Thanks drummonr, I appreciate the input!

I used Ukuu to go from 4.15 to 4.20, for no other reason than it was new. Lesson learned; no matter what I did, it denied me access to my USB storage. On another forum, I was asked what was wrong with 4.15? Nothing, I sheepishly admitted. I uninstalled Ukuu and reverted to 4.15. It’s cool with me to trust the distro.

i get the “if it ain’t broke” mantra, but also feel like trying new things is also part of learning.

i didn’t necessarily need a new music player (clemetine works just fine), but wanted to see if i could find a gui i liked better. banshee didn’t play well with my minimal de in the least so a quick reset with timeshift and i was back to appreciating clemetine’s just fine-ness

i feel like the openness of the linux community especially encourages me to try new things while offering a helping hand to get back to normal if that experiment doesn’t work out as planned.

i’m glad you were able to get your system back to something that works well for you, but also think it’s ok to see what interesting possibilities a change might have to offer sometimes

Newest kernel is suitable for newest PC, with news technologies.
Stay with the kernel of your Linux distribuition, or upgrade when
the SO recomends …news kernels give a lot problems