Audacity was used for so many years by so many, as the obvious choice.

Now, of course, people stopped using it, because of the privacy disaster they got themselves into.
Audacity is basically gone!

Now, to the alternatives.

I could not get it to work, as I thought I am doing something wrong and need to adjust settings.

Then I found this.

And what the hell, this one isn’t maintained, anymore. 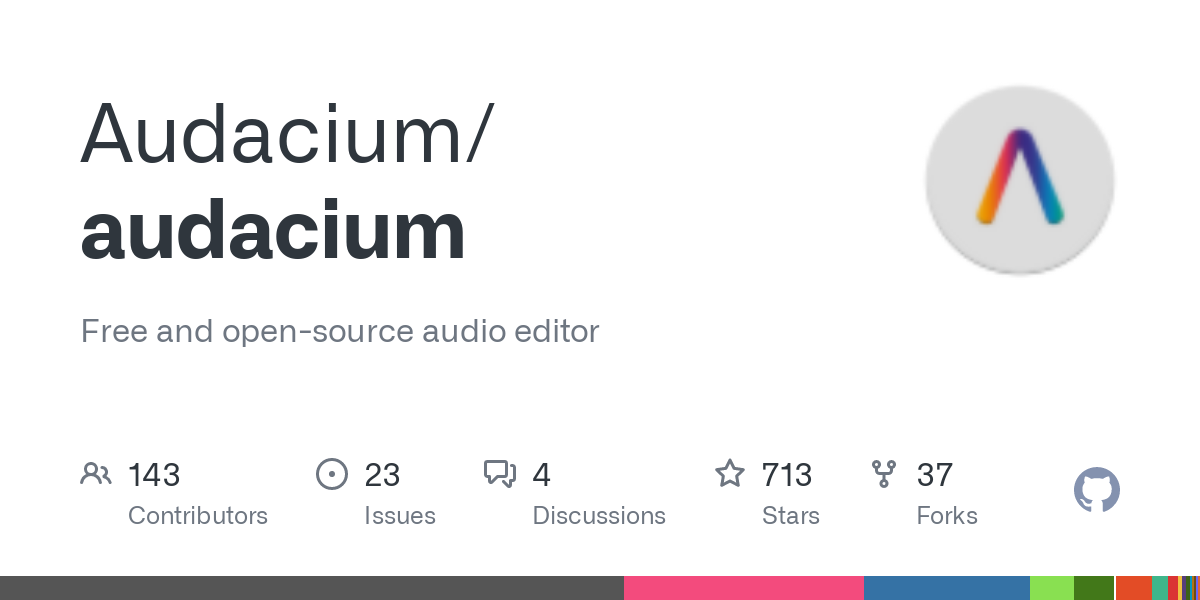 Free and open-source audio editor. Contribute to Audacium/audacium development by creating an account on GitHub.

What a huge pity.

What are the alternatives now? Obviously, Audacity is not in the list of choices.

I am looking for a minimal and very simple audio-only recorder. It ought to be simple & very quick to use.

searching for a FOSS audio recorder.

Void repository has only one audio recorder… its called gnome-sound-recorder
Have not used it, so cant give any report.
Void tend to be selective of what packages they include, so it must be reasonable.
May be a rebadged version of what you have already tried.

Just wanted to suggest the same.

GNOME SoundRecorder is an intuitive audio recording program that can use different sources.
Depending on the codecs installed, the program can save files in the following formats: OGA (OGG Audio), Opus, MP3, FLAC, and MOV.
Files recorded with the program can be cut with a suitable program.

For more “demanding recordings” … perhaps this one: (audio recorder):

I don’t like software being bound to certain frameworks, such as GNOME, because then you basically need GNOME components in a different DE, for example. Additionally, by artificially imposing such a restriction you automatically make sure, that it does only run on certain Linux system. Not to mention running on Windows, will pretty much be impossible without unnecessary and painful effort.

If I would need a recorder for Linux GUI, it would need to be neutral (framework independent) or dependent on KDE, because it’s overall on average the best DE out there.

in this case I need one for Windows

I don’t want to compile Windows, but I want to compile software running on it. In that case, it compiles precisely the same way, as in any other operating system. Just the semantics change.

You can also write Windows specific programs, which use the Windows API. There’s a lot of possibilities, when doing it like that.

write Windows specific programs, which use the Windows API

You must have the server version of Windows. Windows home edition does not have any compilers. One would have to pay for extra software to do that in Windows

Windows home edition does not have any compilers.

I don’t know anything about that. I just know that everyone who does anything on the computer uses at least the Professional edition. Home Edition is really only for people who barely know how to turn on a computer.

Windows home edition does not have any compilers.

Neither do Professional or Enterprise editions… Yes - you have buy Visual Studio (not the free text editor “Code”) or there are others, there are non microsoft compilers for Windows systems…

Not sure, if we are talking about the same thing. I have never seen anyone having an issue with compiling anything on Windows because of “missing compilers”. Whether the provided ones are officially sanctioned by Microsoft, shouldn’t matter, I suppose.

Not sure, if we are talking about the same thing.

@Nevj was unsure if Windows came with a compiler… It doesn’t… I remember MS-DOS had an object linker thingie, but that’s it - if you wanted C or Pascal or Assembler, you had to buy one (but they were easy enough to chuck on a floppy off your mate). I did actually buy a compiler once, Borland Pascal for Windows (windows 3.0 / 3.1) - but the rest of the stuff I was doing at Uni, in Assembler (x86) and C/C++, I just copied the binaries off other computers and took them home…

@Akito – You might want to try “Recorder” – it is an extremely simple recorder that ONLY records PC audio. I found it in the software catalog for Zorin OS; it’s a flatpak – the installed size is only 185kB. I tried it while I was playing music with Strawberry, and it did work. The recording is mp3 and it sounds OK. There are zero controls or options, you just get to decide whether to start or stop. The mp3 file is automatically stored in /home/user/.var/app/… and the app has a viewer for the storage folder. It will also play back what is recorded.

They also have it as a damn snap too

in this case I need one for Windows

Windows 10 have one already built in? [2021 Updated] Best Free Audio Recording Software for Windows 10
or there is this ocenaudio

or there is this ocenaudio

Can’t get it to work in Linux. Plays audio fine, but recording is just blank. Should work in Windows though.

Where is the source code? Does not seem open source. For example, their homepage is openly proprietary. Open source projects often use one of the Creative Commons Licences for their homepages.

Where is the source code?

I have no idea

Does not seem open source.

It must be bordering, been out since Linux Mint 17 and Debian 9, Windows 7 was on the list as well.

their homepage is openly proprietary.

Cater more for the Windows clan I guess, as I could not get it to record at all. I have a USB sound card with headphone and USB slots, no settings to choose what you want to record through.

I’ll see what I can find out.

Have you tried Audacious ?
It’s an offshoot of XMMS.

You didn’t specify whether you need it for Windows or Linux.

As well, there is LMMS for Windows, Linux or MacOS.

Have you tried Audacious ?

Where does it say it can record PC or any sound?

You didn’t specify whether you need it for Windows or Linux.

This is pointing to an error with WASAPI, which is only available on Windows.

I also added the “windows” tag to the thread.