Dear Fossers - I am back after a short ban for, shall we say for; answering back in same manner, who gives a … I even received unsolicited hate

PM which was quickly stopped by quoting the standard engineer’s phrase: If you can’t hack it - teach it…!

All that aside, it is of little or no consequence. Some wrongly say that I am arrogant and unhelpful - What?

Many will have noticed how I tried over and over to help one Fosser with his WiFi issues only to have it thrown back in my face. No matter, I continue to help him out as best as I can to this day. I have been thanked by @Rosika many times yet was attacked on her topic for no reason.

Let us now head for Sicily in the Mediterranean (our second favourite Med island after Corsica) where they have the Triskele symbol, otherwise known as the Triskelion, as their flag… 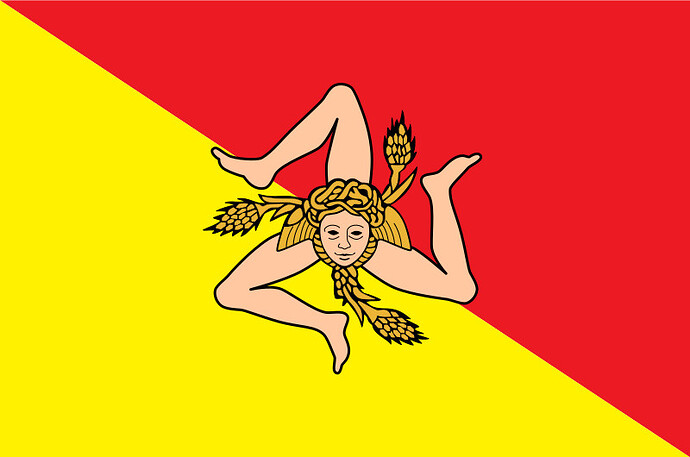 as do the Isle of Man, Brittany and Celtic cultures. Also used by The United States Department of Transportation logo and variations can be spotted on the Füssen coat of arms; Germany.
True to form, far away from the masses, we found ourselves at lunchtime in some remote mountains at a rustic country restaurant - we were the only customers. My wife was chatting to the waiter and I heard her say “You should talk to my husband - he is an engineer” It transpired that he was finishing his engineering degree at Palermo Uni. As with all engineers you can separate the wheat from the chaff inside two minutes flat. I could tell immediately this young guy had potential and a good work ethic; I said that if he was ever in England to stay with us for as long as he needed and wrote my email address on a paper serviette. He was surprised that I knew the Italian saying “Guests are like fish - after three days they begin to smell." and understood my British humour.

Over a year later I got an email to say he was in England and he came to stay with us. It turned out he was a top chef as well as a recently qualified mech engineer. We contacted our favourite high class restaurant Darley’s and the owner agreed to test his skills out over an evening in the kitchen. Fossers - please note - A real test with nowhere to hide…! They were most impressed and immediately offered him a job. He and his beautiful girlfriend now live near Shakespeare country where he is employed as a Project Engineer for a car component company.
My wife has a MBE medal from the Queen for volunteering at local hospitals yet she never mentions it or reg organ donor and donates blood regularly: She deserves another medal for putting up with me

They are lovely Sicilian (Si-ch-ilian) people and my Risotto and Pasta dishes are now much improved.

So as you can see I will help anyone, anytime, anywhere - even druggies, tramps and those short of food in these desperate times as I have lived on skid row in squats more often than in periods of prosperity.
Now married first time at 60 - mostly retired; with an International reputation for design; where clients or American financiers now ask - How much do you want to design for us or, we are in a deep mess, how much do you want to rectify situation? Out comes the ancient XP-Pro 3D CAD workstation with SolidWorks, again and again to the delight of HM customs tax man!
Never dreamed that I would be testing Debian, Linux distros on the old girl - great fun…! Let alone setting two World Records with FsF gnulinux software!

You can slag me off for anything but please do not question my helpfulness or honesty - thanks.

It is well understood that any success is greeted by derision from halfwits and even open hostility born of petty jealousy. I have suffered this from 1969 onwards - I cannot change my DNA - I am - WYSIWYG - so have got used to it and even expect it - like water off a duck’s back. I do not know how to stop thinking freely or pushing at boundaries, improving efficiency… Heck; why should I…?

As Mark Shuttleworth noted “complacency is your big enemy”

He looks down from the space station

to where he stashes his 600 million dollars in Trisquelion land, where in 1967 I took my engineering exams between race days - (only to Drop-Out in 1970.) Hope this has dispelled some misunderstandings…? Stay Safe
Can I help you…?

1 Like
A youtube video to remind us what it means to be a Linux user
Trisquel GNU/Linux preinstalled 16core Modern Computer
The Billion $ Test
Akito closed March 6, 2021, 6:24pm #2