after spending my first couple of years using linux exclusively getting to know bodhi linux, i decided to give another lightweight distro a trial run to see how much i like it and how it compares. antiX linux is based on debian stable and systemd-free. i don’t have a leaning for or against systemd. that just happens to be one of the differentiating factors of this distro from what i can tell.

one of the reasons i decided to give antiX a try is that it comes with a few different window manager choices instead of a desktop environment. i am using the default icewm to get to know the lay of the land, but jwm and fluxbox also come pre-installed.

i’ve been a fan of conky since i first booted into parted magic over a decade ago so i like that it runs by default. firefox is the esr version that i had used previously in debian lxde so it feels familiar even if a bit different than regular firefox. both bodhi and antiX have the option to create an .iso of the present system state. i used that on my test 32-bit computer to create a live usb that transferred easily and quickly to another 32-bit laptop that recently started running again. 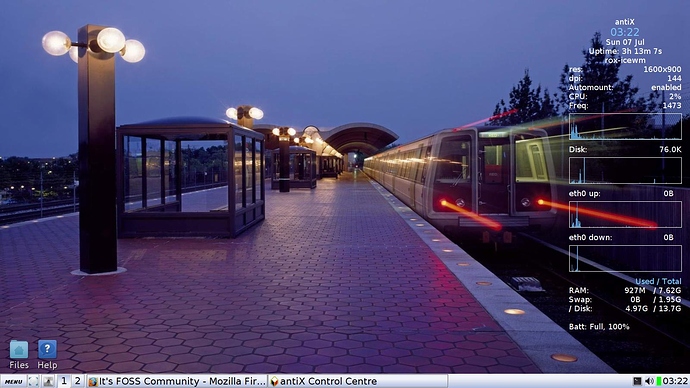 Debian 10 Buster is now out of Beta and is a LT stable release, if you check Distrowatch it gives information about that, so you could the 19 series if you wanted. I have looked at antiX but have not tried it so will be interested to see what you make of it.

If antiX linux doesn’t use systemd then what is does it utilize ?

i’m having a hard time tracking down where i thought i originally read it, but i am pretty sure i remembered reading somewhere that it uses SysV init and indeed my pid 1 is init [5]. i’ll keep looking for an official antiX source to add, but that is what i have for now.

Indeed SysV is the “ideal” init system a hardcore minority is praising to be way better than the meanwhile established “systemd”. I don’t remember exactly their arguments but I think it was a speed related one. I use systemd for a very long time now and it didn’t really disappoint me much in all this time. I appreciate all the tools it gives me.

Do you know Fast Init ?

Have your heard about MUSL libc ?

i had not heard of fast init and seem to remember only just this week reading a quick blurb about musl on reddit. i couldn’t even begin to tell you what that blurb was about. if i had to guess reading the list of projects that use it, what i read was probably in regards to void linux. void usually pops up in discussions centered around “not doing what the other distros do” or thereabouts.

antiX17.4.1 is one of the OS’s that I have on a flashcard(BionicPup32 and 64 are a couple of others). I used MultibootUSB as installation tool for the iso’s. I “play around” with these3 the most, but also a few others. Overall, I believe I prefer the BionicPups.

Nice background pic, and seems be a good OS.
How is your experience with his ?

for what it’s worth, after reading a bit more last night about systemd it seems like replacing the init function (to bootstrap user space) is just part of what systemd does. i grabbed the picture below from wikipedia.

going off of what i read there (not doing any kind of a deep dive into anything) part of the argument that @Akito mentioned is that systemd does so many things (a bit of an explanation also below) that i don’t have an answer as to what antiX might use in the other roles/to take care of the other functions.

The design of systemd has ignited controversy within the free-software community. Critics regard systemd as overly complex and suffering from continued feature creep, arguing that its architecture violates the Unix philosophy. There is also concern that it forms a system of interlocked dependencies, thereby giving distribution maintainers little choice but to adopt systemd as more user-space software comes to depend on its components.[89] 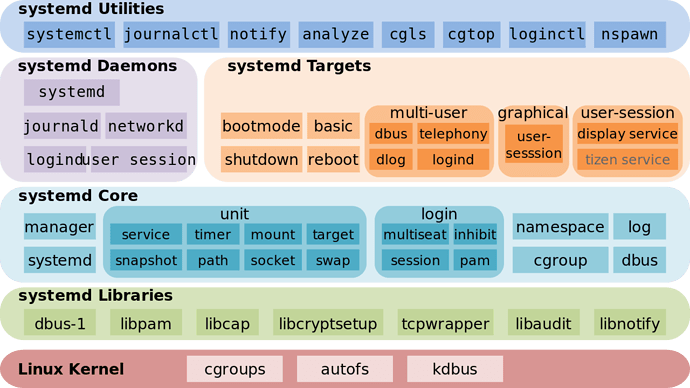 How is your experience with his ?

so far (after using it for just a couple of days) i like it. after boot it only uses about 300 to 400 mb of ram which is similar to bodhi (ubuntu mate was over 800 and mint cinnamon around 1 gb on my machine comparatively). i am still figuring out how to get all of the window and font sizes to a comfortable level, but there are links in the control centre to all kinds of config files and included faqs to read through to help me find my way

I’ve booted it twice (Live USB) on my work’s Windows 10 laptop - but - having trouble getting my head around persistence!
Been using Linux/UNIX 25+ years - but having trouble with something so simple?.. there’s a Youtube video at antiX’s website - but it’s so LONG TL;DW (too long didn’t watch)… and I hate getting help from videos anyway - would a simple step by step readme/howto with some nice formatting and indentation be too much to ask for?

here’s one link that says you start by pressing f5. which you just found… but it also includes this:

All kinda “worked”… but I don’t think it will be my daily driver… for a start I got really crap eyesight - and I can barely find anything on 14" 1920x1080 settings - there doesn’t seem to be any “Universal Access” or “Assistive Technology” setting anywhere (this drives me crazy about nearly all operating systems - whether open-source, or proprietary - they seem to bury such settings in layers of obfuscation - such that vision impaired users will have trouble from the very start!)… I did see some options in the grub boot to set resolution - but I don’t want to go through 5 reboots to find the setting that’s best… Also - I can increase the font DPI - but then it glitches the rest of the desktop - and can’t find anything to increase the size of the cursor…

Good effort from the antiX team - but I’ve no prejudice against systemd, kinda used to it - guess I had to - ~13 years or so ago, Sun Microsystems started pushing Solaris users to something called “SMF” (similar to systemd commands like “service”) instead of Sys V init - hated it at first (reminded me of windows “net service blah blah”), but eventually got my head around it…

With a good modern distro - shells like ZSH will find / complete what daemon service you’re looking for to check status on - or restart or whatever… it’s too easy,… e.g. type “sudo systemctl status systemd-timesy[tab]” and it will find systemd’s newfangled timesyncd service (RHEL / RPM based distros still seem to be using ntpd)…

I can barely find anything

i am reading the documentation for this exact reason right now. originally i upped the dpi, but that just made window title bars and tabs way out of proportion. customize look and feel helped with some applications and others like the terminal i could adjust individually. i like that it at least has documentation about how to mess with the config files instead of having to web search all of the settings. it is definitely a work in progress

Found this by accident and I figured it might be interesting to some.

The “nosystemd” religion adds pain-in-the-ass side-effects. The repo system is unstable, you can switch from nosystemd to systemd packages very easily and your repo database is fucked-up.
It is not easy to get the last version of Firefox with the repo mechanism neither.
So finally you don’t build your confidence on this unstable system for reasons that you don’t mind.
But you can realise that only with using it for several weeks.

I believe I’ll stay comfortable and relaxed and not worry about systemd or SysV or any of that stuff. If a distro doesn’t work easily and at a speed that’s usable, I’ll try another. With only a very few brain cycles left, I just can’t perceive any differences at the user level.

regardless of (perhaps even in spite of) the comment that preceded yours, i didn’t find anything uncomfortable or preachy about the lack of systemd with antiX. i spent a couple of months using it daily. as i tried to get my system set up to a state that was comfortable to me, i read hundreds of forum pages and precisely none of them had anything ugly (or much of anything for that matter) to say about systemd. it was simply a tool that wasn’t included or used.

i enjoyed learning more about window managers and config files even though in the end i couldn’t get the visuals (font size mostly as discussed with and by @daniel.m.tripp above) set up like i wished and i returned to bodhi.

@tosim91, i appreciate the heads-up about the new point release. i continued to use 17 until just after 19 was initially released. after that i visited that partition less and less until eventually i shrunk it into an iso to be kept with all of the others i may or may not ever visit again

and then voided that space for more vm testing room.